On Monday 29 February, we celebrated the fourth (or first) birthday of the Raspberry Pi computer by giving a little gift to the community in the form of the Raspberry Pi 3.  A lot more power, with built in wireless LAN and Bluetooth, for the same great price of $35.

On 5 and 6 March, the community paid us back and then some.  Well over 1500 people of all ages gathered at the Cambridge Computer Lab for our Big Birthday Weekend.  An amazing festival of digital making and creativity, showcasing the very best that our community has to offer. For us at the Foundation, it was the best birthday present we could have hoped for. Here are some of my personal highlights.

Across the two days, there were 47 talks from community members and Foundation staff showcasing projects, sharing experiences of using Raspberry Pi in education, talking about Code Clubs, introducing new software developments, and exploring some of the big issues like getting more women and girls involved in digital making.  The lecture theatres were packed all weekend.

I was particularly pleased to see so many great contributions from young community members, like European Digital Girl of the Year Yasmin Bey‘s powerful talk on Sunday morning about encouraging more girls into tech. It was great for me to be able to give a talk on what we’ve been up to in the Foundation and get some feedback on our strategy from the community. Thank you to everyone who came along to that session. Me talking about the Foundation’s strategy at #piparty

We were also treated to both (accidental) pyrotechnics and (deliberate) magic.  All of the talks were recorded and will be available online in the next few days, so don’t worry if you missed them.

There were 28 workshops where kids and adults had the chance to get hands-on with Raspberry Pi, have a go at hacking Minecraft, make music with Sonic Pi, and learn how to make projects with Scratch. Again, the vast majority of these were led by volunteers from the community, including several that were led by young people. One of the workshops run by our Creative Technologists

One of my personal highlights was the workshop that brought together Raspberry Jam Makers from all over the world, to share experiences and explore how we could work together to grow the community even further.

The show and tell zone was packed full of ingenious projects that members of the community had built for the sheer joy of it. Like most people, I got lost for hours among the games, robots, demos, and inventions. I’ll also confess to a little competitiveness trying to defeat the AI Connect 4, a contest which sadly ended in an honourable draw. I know how Lee Sedol must be feeling after his first couple of games of Go against DeepMind.

The marketplace brought together lots of the best makers and distributors in the ecosystem.  Pimoroni, The Pi Hut, ModMyPi, pi-top, and many, many more were on hand.  They’re such an important part of the community and it was great to catch up with them and play with some of the new toys they have on offer. There was a bustling marketplace

Special thanks to our friends pi-top who presented Eben, Liz and David (our esteemed chairman) with a fourth birthday edition of their wonderful Raspberry Pi-powered laptop.

Saturday night ended with a massive party involving 110 pizzas, a huge quantity of cake, gallons of soft drinks, 2.5 barrels of beer brewed using a Raspberry Pi, and one barrel of Raspberry Blush cider.

We were also treated to a live coding music performance by the wonderful Sam Aaron, creator of Sonic Pi, with his band Poly Core.

Perhaps the best thing about the Big Birthday Party was that it was a community effort.

Enormous thanks go to Mike Horne and Tim Richardson, the organisers of Cam Jam, who once again gave huge amounts of their time to make it all happen.

We’re also hugely grateful to the Cambridge Computer Lab who very generously gave us the use of their fantastic building.  Thanks, too, to Microsoft and Real VNC, who sponsored the event and provided fantastic interactive demos. Thanks to Ben at Fuzzy Duck brewery for the Irrational Ale.

One of the stand-out contributions over the weekend was from our growing community of young people, including the self-styled but appropriately named “Pi Squad”, and our very own Creative Technologists. They are such a talented bunch of people, and it’s great to see them already taking leadership positions in the community.

The Foundation team was also out in strength across the weekend, giving talks, running workshops, signing up volunteers for Code Club, and generally helping out wherever we could.

Our own Dave Honess deserves a special mention for spending all of Sunday in a space suit to promote our new Astro Pi competition. As another colleague (Matt Richardson) said, “dress for the job you want, not the job you have”. We might all be exhausted, but we’re already looking forward to next year. 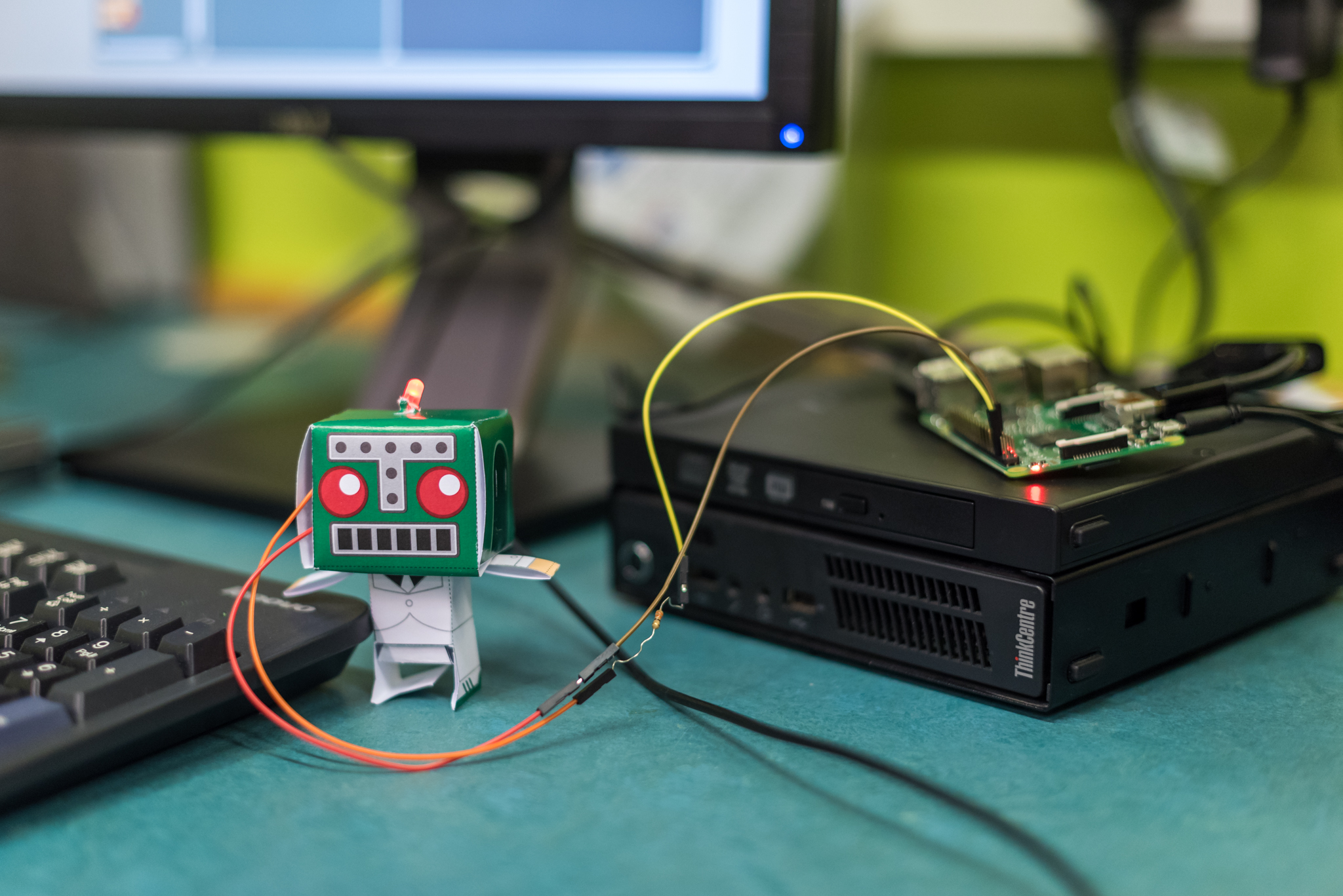 I had an amazing time. I was a little star struck but thanks to everybody who took the time to talk to me. Amazing presentations as well!

Oh how embarrassing! Next time, I’ll leave the pyrotechnics to Fran Scott!

I was there and thought you handled it brilliantly! These things happen with autonomous UAVs after all (Although I did leave a minute later to avoid the sprinklers :P )

It was an excellent event. Thanks to Mike, Tim and Helen and the army of volunteers who made it so good. There’s a video of my talk “Is KickStarter Dead Yet? The Pros and Cons of Crowdfunding” up on YouTube already…

That is a huge birthday party. Impressive!

Gallons of soft drinks and 2.5 barrels of root beer brewed by a Raspberry Pi? 110 Pizzas! I know what I am going to do today…

I kept passing the stand and just thought it was Minecraft. Then saw it was over VNC. Had a nice chat with the people on the stand and found out their accessing the display data and sending it over VNC, so yes. Minecraft played remotely over VNC with RealVNC.
They mentioned a bit more optimisation to do before ready for primetime.

Camera was also working over VNC. Also had a good chat: clever and fascinating stuff.

It was a great event full of great people. If ever I get a chance to be young again I’m joining the #PiSquad. I’m standing in the background of their selfie and I did have to resist the photobomb opportunity …

Yasmin Bey. Just noticed her full name. Is she a descendent of Osman Bey (founder of the Ottoman Empire)? She’s certainly a Leader! :)

Were the talks filmed? Any plans to make them available if they were filmed?

Yes; Mike and Tim are going to make them available online soon. We’ll tweet about it and add to this post when they do.

I have this urge to be in Britain for some reason.
Happy birthday!

It was such an amazing weekend. I had a great time although I have to say it made going to work on Monday morning all the more difficult!

I personally enjoyed seeing the younger members of the community getting hands on…just need to work out how to convince them to become teachers!

An utterly brilliant weekend. Thank you for running such an inspiring and fun event.

Great event again everyone. Fantastic and inspiring, well done all.

I travelled from Hungary to visit this great and fantastic event. The goal of my visit was to see this fantastic community, learn new things and show Hungarian Raspberry PI fans the latest news.
It was not an easy to get a ticket. Because it was out of stock when I heard about this event.
I would like to say special GREAT thanks to PIMORONI Team for tickets!
And of course Thanks to Eben Upton for this nice hardware, and the Raspberry PI Foundation for support.

Here is a short “Happy Birthday” video of celebration:
https://youtu.be/YW4SLY1pR44

It was great! So cool to get to know the whole pi community and ecosystem. Me and Jospeh will be back! Aufwiedersehen!