Eben and I are going to be out of the UK for much of the rest of May, doing press, meeting partners, visiting Raspberry Pi fans, hanging out with science fair kids and giving talks. We’ll be in Phoenix for Intel ISEF, San Francisco for Maker Faire (come and listen to our talk! We don’t have a stand this year, but Raspberry Pis will be on sale in the Make Shed), and, most excitingly for both of us, in Tokyo for the Japanese Raspberry Pi User Group’s Big Raspberry Jam on May 25.

Masafumi Ohta, who moderates the forums here (he’s most often to be found in the Japanese language forum, but also pops up in the English sections every now and then), is running the event. Admission is free. We’ve heard from people who don’t even live in Japan who are making the trip to Tokyo; it promises to be an amazing day, with lots of hacking sessions, tutorials, talks and opportunities to meet like-minded Pi enthusiasts. We were last in Tokyo back in November; the Pi has become much more easily available in Japan since then, and we’ve even seen an official Japanese translation of the Raspberry Pi User Guide appear since our last visit. Masafumi-san’s been sending me artwork for displays and badges, and notes about the day: we can’t wait to get stuck in. RS Components, who have a large presence in the far east and are one of our two manufacturing distribution partners, will be sponsoring the event. Masafumi-san has asked me to publish the following information here on the blog. If you’re in Tokyo on the day, please come and see us!

Japanese Raspberry Pi Users Group will hold the event to welcome Eben and Liz Upton, Founder of Raspberry Pi Foundation coming to Japan. It is for encouraging Raspberry Pi users and community in Japan, now growing up rapidly.

Gathering 150+ people at the big event – 4 sessions, 1 mini session,3 LTs and more. It is also not only for Raspberry Pi users and geeks, but also the Raspberry Pi beginners. RS Components and some companies help the event, and have booths exhibiting Raspberry Pis and some stuff (books,boards,cases…and more). 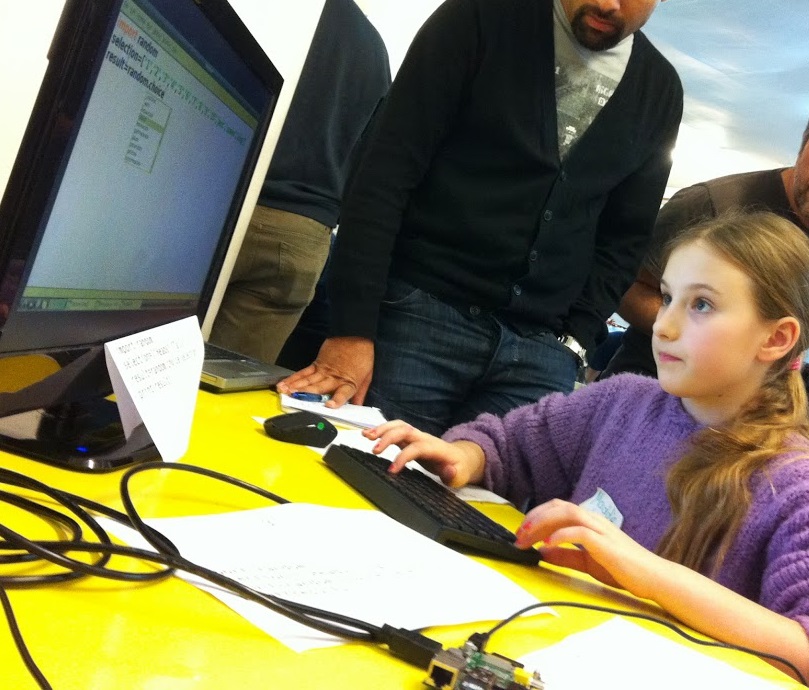 {Disappointed face} are we done with the Ebon t-shirt jokes now?

Never! (Although I’m thinking we should buy one with the correct spelling of his name on it, because it’d save a ton of time.)

Oops sorry my bad, I hate it when I see Eben’s name spelt (is that right, or should it be spelled?) incorrectly too. Sorry!

Hur hur – not to worry; we’re used to it! My favourite so far was one where they got his email address (which has his name in it) right, but managed to address the whole thing to Mr Ebin Ptun in the body text…

I suspect the T-shirt jokes will “Die Hard.”

Not to be ungrateful, but this could have been more useful a few weeks earlier. I might’ve been able to go. Is there a general resource for finding events like this ahead of time?

There is: there’s an events page in the MagPi every month, and there’s also a page on our forums dedicated to meet-ups. http://www.raspberrypi.org/phpBB3/viewforum.php?f=57

I lived in Japan from 1979 to 1984 and spent every spare moment in Akihabara. Back then, there were some department stores upwards of half a dozen stories high that sold typical consumer appliances and electronics, but one was particularly special – it had an escalator just inside the windowed exterior that went up seven floors. On the ground floor were everyday items like washing machines, refrigerators, vacuum cleaners, etc., but as you glided up The Stairway to Heaven, the offerings became more special … and expensive. Cheaper boom boxes, Walkman-clones, and other then-popular items gave way to more sophisticated hi-fi gear from Pioneer, Panasonic/Matsushita, Kenwood, Sony (still a relatively new company), etc. Electronic musical keyboards started appearing about halfway up, with the cheaper electronic organs and pianos on lower floors being supplanted by more serious multi-voice instruments, with full-fledged analog synthesizers being topped only by the first of Yamaha’s FM-synthesis digital models. By the time one got to the top floor, you were in the stratosphere of professional sound equipment, including Voice of the Theater movie speakers and amps from Altec-Lansing, the highest-end hi-fi gear from Denon, etc.

Below the train station stairways were crammed all manner of scores of pookas, most less than 10 square feet, with a proprietor in the middle (they had to crawl under the front shelf of goods to get in/out) who was within arm’s reach of everything he sold. Each specialized in only one or a few types of electronic components, such as AC cords, wire and cable spools, transformers, resistors, capacitors, transistors, integrated circuits, etc. It was the nerd intersection of Heaven, Valhalla, Shangri-la, etc.!

I hope that those stalls are still there in some form, although I’m guessing they went the way of hobbyist-oriented computing of the 1970s and 1980s. Perhaps this Jam will encourage a new generation of stalls stocking Pi boards, peripherals, accessories, etc.

They definitely are; I spent several happy hours poking through the tables of stalls just like the ones you mention last year. Today’s multi-storey electronics shops now have an electrical beauty floor as well; you can buy a device with whirling rubber fingers to do your shampoo for you, a magical ionic toothbrush and lord knows what else. Amazingly good fun.

The streets are so clean over there, you may probably eat directly on the floor without any problem

you can eat off the floor of my batcave too, there’s peas, carrots, meusli bar crumbs, , ..

Clive and I actually did eat off my kitchen floor on Monday. (It had just been steamcleaned, and I do not believe in waste.)

You didn’t want to waste washing-up liquid on cleaning your plates, so you steam-cleaned the floor instead? ;-)

When will you be at the IISEF? I won’t be able to attend the whole thing, but I would very much like to get a chance to see you when you are in Phoenix.

Gah!, Wouldn’t happen to be running anything later that week? I leave for Japan midday on the 25th!

Can you attend the event in Osaka on Monday? I am afraid it will take about 3 hour to go from Tokyo.if you go around Japan,please stop by.http://www.innovation-osaka.jp/ja/events/1666
need for registration.
http://s360.jp/form/30956-2068/

Oh, sorry but it was too late already. I couldn’t fit it in my time table. But thanks anyway.

We are very much looking forward to hosting you in Tokyo. You’ll find plenty of enthusiastic Pi users here.

And you can tell people “The Pi is big in Japan”…