Today’s grant from Google (if you have’t read the post about it yet, go and have a look before you continue with this one) has also enabled us to pick up our newest hire, Clive Beale.

If you’ve been visiting this website regularly over the last 18 months or so, you may recognise Clive as one of our volunteers. He’s been involved with Raspberry Pi since a few days after this site went live; he runs Pi workshops, writes Pi teaching materials, does a lot of work with Computing at Schools and other CS teaching groups on things Pi, and is now leaving his successful teaching career to head up the Raspberry Pi Foundation’s educational strategy.

Clive’s our new Director of Educational Development, and he’ll be organising getting the Google-funded Raspberry Pis into the hands of kids who will use them; he’s also working with some of our partner organisations on the curriculum, and dealing with materials and outreach. He’ll be dealing with resources for kids, and for teachers and parents too. (If you’re visiting the BETT show at the end of this week, you can meet Clive, who will be demonstrating, talking about the Pi in schools, and torturing Jelly Babies with GPIO pins.) He says:

Sometime during 2011 I came across the Raspberry Pi on the web. As a teacher of ICT and Computing I thought, “Hmm… that’s interesting”. It hinted of physical computing, programming and cross-curricular projects.

Later that year I had a chance to play around with a demo board, and this time I was sold. Until I had the thing in my hand I hadn’t really appreciated its potential: the size, the price, the OS on an SD card. Most of all I loved the fact that it was both physically and conceptually so far removed from the sealed-box PCs that my students used every day.

Using the Raspberry Pi in the classroom, you have no choice but to learn new stuff. It really was a remarkable machine.  So I took to hanging around the forums, writing bits and pieces, helping out with the blog and generally making a nuisance of myself. The plan worked and here I am.

It’s fantastic that that the Raspberry Pi hardware has become such a star–an icon even–but the hardware has always been a means to an end. The Foundation’s goal is to educate and encourage a new generation of computer scientists and to invigorate computing in the UK and beyond. We’ve always been passionate about this and we’re delighted that we now have the resources and support to help make it happen. It’s been an amazing journey so far and I’m proud to be part of it. And the best thing of all is—we’ve only just started.

One thing that we think is of paramount importance in Clive’s work here at the Foundation is continued teaching, and continuing conversation with kids from all over the country; it’s no good having someone whose job is to engage with schools and teachers if he doesn’t have up-to-the-minute classroom experience. So the plan is for Clive to visit schools around the UK very regularly, holding classes and workshops for kids in the classroom as well as talking to teachers.

If you’re a teacher from the UK and you’d like Clive to visit, please leave a comment below, and we’ll add you to the list we’ll eventually be picking from. (We’re seeing a lot of interest in this workshops program already, so we won’t be able to visit everybody, but we’ll do our best to make sure that we cover as much of the country as we can.)

Clive rides a motorbike, owns a sous vide cooker he built from bits of junk he’d rescued from a skip, and enjoys pork scratchings. He gave me a photo for this post that’s so awful we can’t use it because it’ll scare children (we’ll have a new one in place as soon as we can).

We think he’s going to fit right in here. 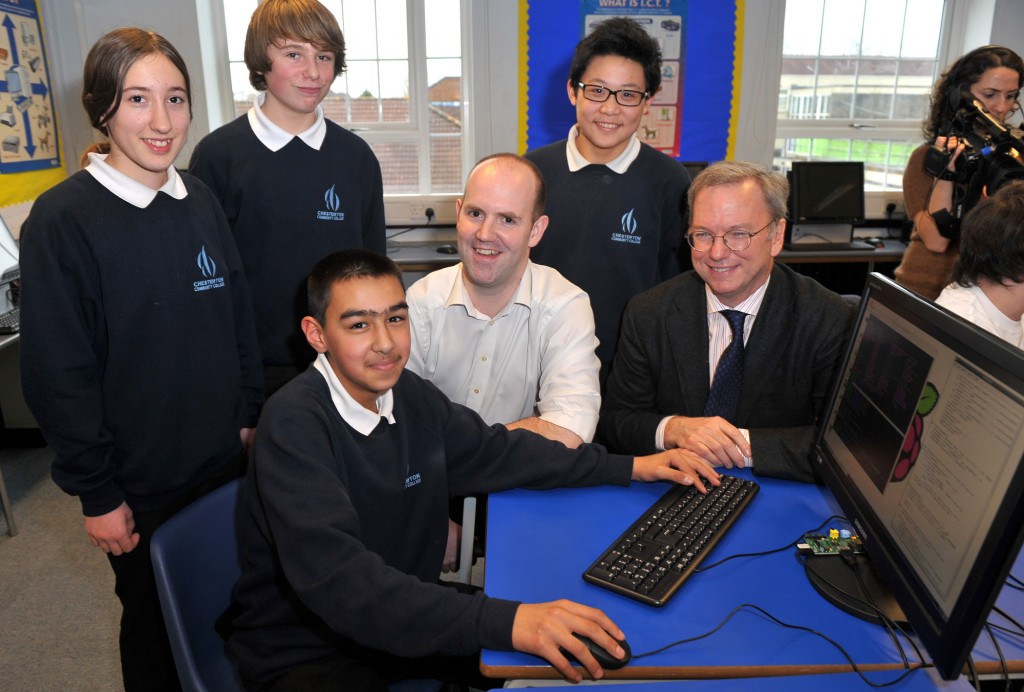 We’d love you to visit.

I hope Clive can come and pay a visit to our school Pi Shoppe. It’s a community space with 30 Raspberry Pi computers for all our community to make use of. We have around 300 children from primary schools visiting our facility each year as well as the 850 children that attend our school.

Would love to have Clive drop in. Reintroduced GCSE Computing last September and starting A-Level again in September. Using Gadgeteer/Arduino/Pi in the classroom for teaching practical skills and concepts, would welcome the opportunity to develop this further.

I know enough of the Foundation’s history to know that this is big step towards what you all originally envisioned for the Pi. Hopefully, other groups will take notice and jump on the band wagon with Google.

Congrats from a fellow biker, Clive!

We would love Clive to visit Newnham Croft School.

Hardly worth getting on the motorbike to come over but the butcher next door makes their own pork scratchings and we started a technology club last year and maybe are close enough to be a PiLab. Anyway, connect if you get the time and the urge for great local pork scratchings and, given enough notice, perhaps even some sous vide delicacies.

King’s School Witney would love a visit. (Primary and Secondary on site.)

Congratulations Clive as a parent trying to teach my kids on my own your contributions could be a life saver. Not too shabby for a charity that was hoping to get maybe what 10,000 units into the hands of school kids I would imagine this helps validate your 7 years of effort. So I guess congratulations should go all around.

Congratulations Clive! Any chance of you publishing your sous vide build? (Best way of improving school dinners, in my opinion :-))

It would be great if Clive could make it to our Computing at Schools event here at the National STEM Centre in York: http://casstem.eventbrite.co.uk/

We would love you to visit us in Nottinghamshire at The Minster School.

We’d like to chat about how the Pi can work with a BCS project we’re working on.

Amout time for another “My Desk” photo! (NB I notice Liz hasn’t posted a pic of her desk yet…..)

Dear Clive,
I am a school governor for Poulner Junior School in Dorset. We are highly interested in pushing IT learning forward and would love to hear more about the Raspberry PI initiative. Regards

HI, I’ve been really enjoying setting up our schools one pi and our ks3 computing club.
We’ve love a visit to South Wales from someone who has so much experience.

Hi, I’m the ICT curriculum manager at Burnham Copse Primary School, near Basingstoke, and we would greatly appreciate a visit to help in pushing ICT in the school beyond the standard fare.

I am a sixth form student at Sir Harry Smith Community College, Whittlesey, Peterborough. I am currently studying Computing at A-level, and using a laptop with Linux (Ubuntu) to practice my coding. I feel that a visit would be highly beneficial for my class mates and I to be introduced to the Raspberry Pi and how it works.

Thanks for the comments, requests and kind words (yes, it is indeed that “odd guy” :))

With regards to how you can get these Raspberry Pis, the short answer is that the donations will be handled via one of our partners, as Liz says in the Google post. We (and they) will be able to tell you more soon — it’s early days!

Haha. What a coincidence!!
1. I g+’ed about donating million Pi to kids in underdeveloped countries ~4 days back had I been a billionaire. And today, I see Mr. Eric Schmidt’s smiley face alongside the kids using Pi :)
2. My name’s you guessed it and the title of this page :)
3. I got my Pi board today :)
4. What the heck.
Great work from Google! Kudos. And if you got Pi already, more power to you!

We are going to teach programming with our year 10s next year through the BTEC course. We have two Pi’s – they are amazing. We need to buy another 30 at least. Any free Pi’s would obviously help out the school, but please come and visit us. I have a year 10 “geek squad” who would be in awe.

It seems that the demand for you will be very high in the UK. Don’t forget to plan a world tour eventually!

Massive Congratulations. Life on the road then? If you fancy visiting a primary school in Formby, Merseyside that are trying to start at the grass roots let us know!

I grew up in Formby. What school?

Huge congratulations Clive. They got the right guy for the job. It would be great if you could come and pay us a visit at our school in Radnorshire; come and meet our geeks. They like Pi.

Thanks Dale. Wales is definitely on the cards — watch this space.

Congratulations Clive!
I’m the Head Teacher at a Primary School in Cheshire and we are planning to introduce programming/hardware to our year 6 children from next year. A friend has shown me the potential of Raspberry Pis but am looking for a way to kick things off with our staff and children. I feel our children would greatly benefit for the future if you could give a little support please? They are the nicest kids you’ll ever meet and promise in return all the (second best) kind of raspberry pie you can handle!

Remember Clive that when traveling one only uses the top layer of the suit case. pack less clothes and to enable more duty free :-)
Well done.
Triumph rocket 3 tourer NZ

Can someone solve the traveling salesman problem on a pi to let Clive know how to plan his trip to visit all the places mentioned above? Thanks.

Congratulations Clive. Really pleased for you.,
I’d love some more information about how to use the Raspberry pi in lessons, I have one, but have done very little more than switch it on. Going to start teaching Computing next year…

Well Done Clive!
My school would like to set up a Rasberry Pi Club, but cannot get funding. We out like to find out if we can get some. Please send an email to Mr Micheloni at Mill Hill County High School, London.
Viljo Wilding