I figured I would share a project I've been working on for the past few weeks (months) I only get a few hours a week to spend on the project so it's taken longer than anticipated. Basically I shoe-horned a Raspberry Pi into a broken SNES case.

I chose an SNES because the controller configuration, it allowed be to play NES, SNES, SEGA master system, and Genesis. I tried PS1 games, but lacking the 2nd row of bumper buttons was a problem. I think the next one will be a PSOne...
I sourced the SNES from a friend who rescued it from a trashcan.
Step one was the proof-of concept. I soldered a ribbon cable from the GPIO to the controller board of the SNES.

With a little work, everything worked, even the LED.
Next fitting the RCA, Audio, power, and network to the rear pannel, and fit the Pi. Filled the original holes and redrilled for the new connectors. The gap at right is due to the panel not being screwed down.

Next I added the micro-switches and resistors to utilize the reset and eject button. I also wired the power switch to the USB power connector.

Test, test, test. Ran into a problem. RCA video is unreliable when it comes to the overscan. It would work for some emulators, emulationstation would crop the top and bottom. More work than needed; back to the drawing board.
I purchased an HDMI and USB port-saver, and replaced the RCA video, and Audio.

Test, Test, Test. Everything seems to be working. Time to close it up

Last minute addition was adding back in the RCA video and Analog audio to a DB9 connector in the game slot for a second phase of the project.

Had to test it to make sure it worked so I fashioned an adapter out of a DB9 connector, RCA jack, and 1/8 headphone jack.

Assembly complete (for now). Both Controllers work, Power works as expected, reset exits games, and can shut down the unit, currently eject doesn't function but it's wired to the GPIO and waiting for implementation.

Big Thanks for Florian from PetRockBlog, and Alsohi of emulationstation for all the hard work, Without them this project wouldn't have been possible. I know nothing about code, but am pretty good with a soldering iron. Also Thanks to this forum, Every time I hit a roadblock there was a thread here that moved me toward a resolution.
I hope everyone enjoys the project. Let me know if anyone has any questions about it, or would like more info.
-Ed

Damn, this is impressive. Looking great bud.
Could you provide a link for the emulator itself?

Thanks, I think my wife is glad it's done, for now...
I used the Retro-Pie setup script from Florian over at petrockblog Here's a link to his stuff:
http://blog.petrockblock.com/2012/07/22 ... pberry-pi/
I found it really easy to use, and set up. I'm not much for code, so the simpler the better.

How did you wire the power button and reset button to operate in that manner? I'm building one of these, and it would be great if I could replicate what you have done.

The power switch was rather simple, i used the switch from the SNES which is a single-pole single-throw switch. I use it to simply cut the power going to the RPI. I wired the switch in series between the power connector and the USB input on the pi by clipping the USB cable in half and soldering the new connections. The reset button is a micro-momentary switch I wired into the GPIO and positioned in the original location of the factory reset switch. There was a little trial and error to get the switch in the best place, but it wasn't too difficult. I may have some more detailed pictured of the switches and wiring, or I can take some if it would be helpful. Good luck with the project!

Great project, I'll try to do one for me.

Can you put more pictures how to connect the reset button on the Raspberry? Wich RPI are you using?

How on earth did you get the controllers wired and programmed? I have a slew of "original" snes controllers and would LOVE to use those.

Another idea... you can take a SNES cartridge and put the SD Card inside and then act like a normal cartridge!

as a nostalgia maniac i go crazy every time i see someone pull these off, emulators are always a little off the mark because of the way you interface with them through a computer. how to combat this? go full nerd and crack out the souldering iron and your credit card sized computer. ^_^

Nice result dude, im planning on working on a similar thing only its with an old NES console. hope i have as good a time with it as you, god damn i love the Pi!

how did ya go about wiring the led?

Wow! Lot of work! Excellent!
George in New Jersey.
(learning a little bit every day.)
(and darned confused most of the time!)

How did you connect the RESET button of the Snes to reset the emulator? Which Pins of the GPIO? Thanks, I am working on this project and I'm stuck there.

Sorry for the lack of responses, I've been working on other projects (will reveal them soon, more retro gaming) and moving. Everything is still boxes up but I may be able to get some stuff opened or find a picture to show the reset. Basically it's a micro-switch i positioned under the plunger for the original reset lever. It took a little trial and error to get sitting just right.

-I've got one better in the works... Hopefully I'll have some time to get back to this project soon.

How on earth did you get the controllers wired and programmed? I have a slew of "original" snes controllers and would LOVE to use those.
-The controllers are wired to the original board on the SNES, so there are no changes to the controllers themselves. The SNES connectors are on a single board with a connector that looks similar to a DB9 connector, I used a ribbon cable and soldered directly to the SNES board according to the directions on petrockblog

Can you put more pictures how to connect the reset button on the Raspberry? Wich RPI are you using?
The reset switch is wired to the GPIO connectors on the RPI using a pair of resistors to manage the high/low state without shorting anything out. I'll try and get some better pictures when I get my office projects unpacked. The RPI is a 512 modelB

how did ya go about wiring the led?
-I cut the trace to separate the LED from the rest of the circuit and wired it up to 3.3v, I'll try and get a picture.

How did you connect the RESET button of the Snes to reset the emulator? Which Pins of the GPIO? Thanks, I am working on this project and I'm stuck there.
-I'll get a picture that may help. I'll check the GPIO numbers, my notes may be hard to find..

I'm glad everyone likes the project, I'll try and get some updates soon,
Thanks!

ive looked on the retropie adapter and is says pin 11 is for escape...so if i connect one side of the switch to pin 11 does the other side go to 3.3v or ground or both to pin 11

I want to get round to building one of these some day, strictly for SNES emulation so the Pi would boot straight into a SNES emulator from the off. Features I hope to add but probably won't manage all of them due to complexity would be:

- analogue audio/video piped through the proprietory SNES a/v socket
- on/off switch both switches 'console' on and automatically shuts the Pi down before cutting the power when switched off
- reset button resets current game, just as it would on a real SNES
- eject exits game

I am also curious how you attached the controller board of the SNES to the GPIO on the RPi. Hopefully you can get that tutorial up soon. Thanks for posting.

Hey any chance I could get a diagram of the pins used on the ribbon that connects to the snes controller ports?

Also did you tap into the original power for the snes or did you stick with the USB power?

A PS RPI would be a great idea, as you would have enough room for a Harddrive, USB game-pad adapters and the PI itself. Of course, the disc drive would have to go. But you could have the SD card slot and USB hub in its place.
I am amazed at what can be done by such a small and cheap device!

I did a similar set up as OP. Used the original power button and original reset buttons as well. (Reset takes you back to the Menu.) OP's is a little cleaner than mine but I wanted every Pi port accessible on the rear of the SNES.
Here are my pics: 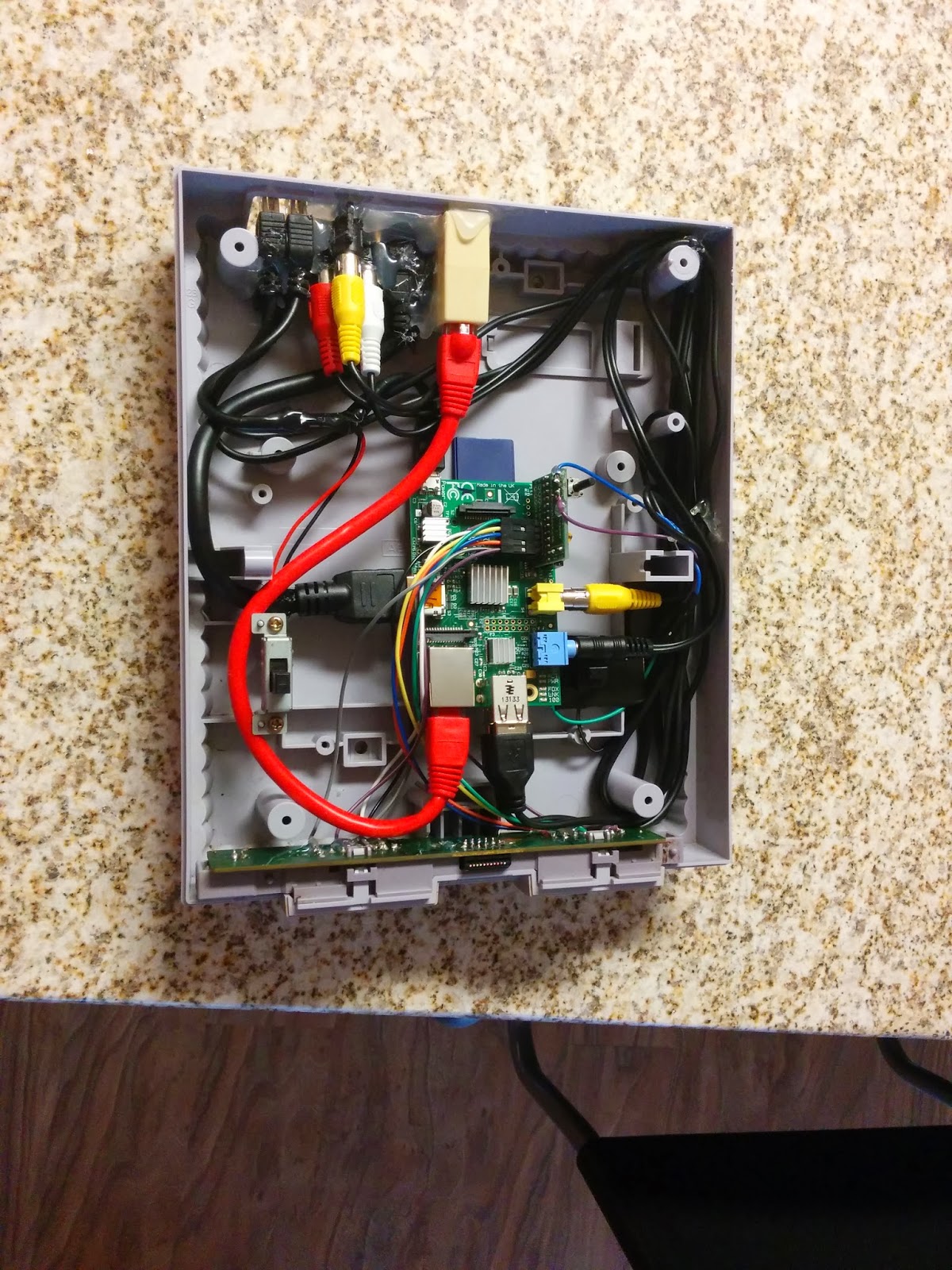 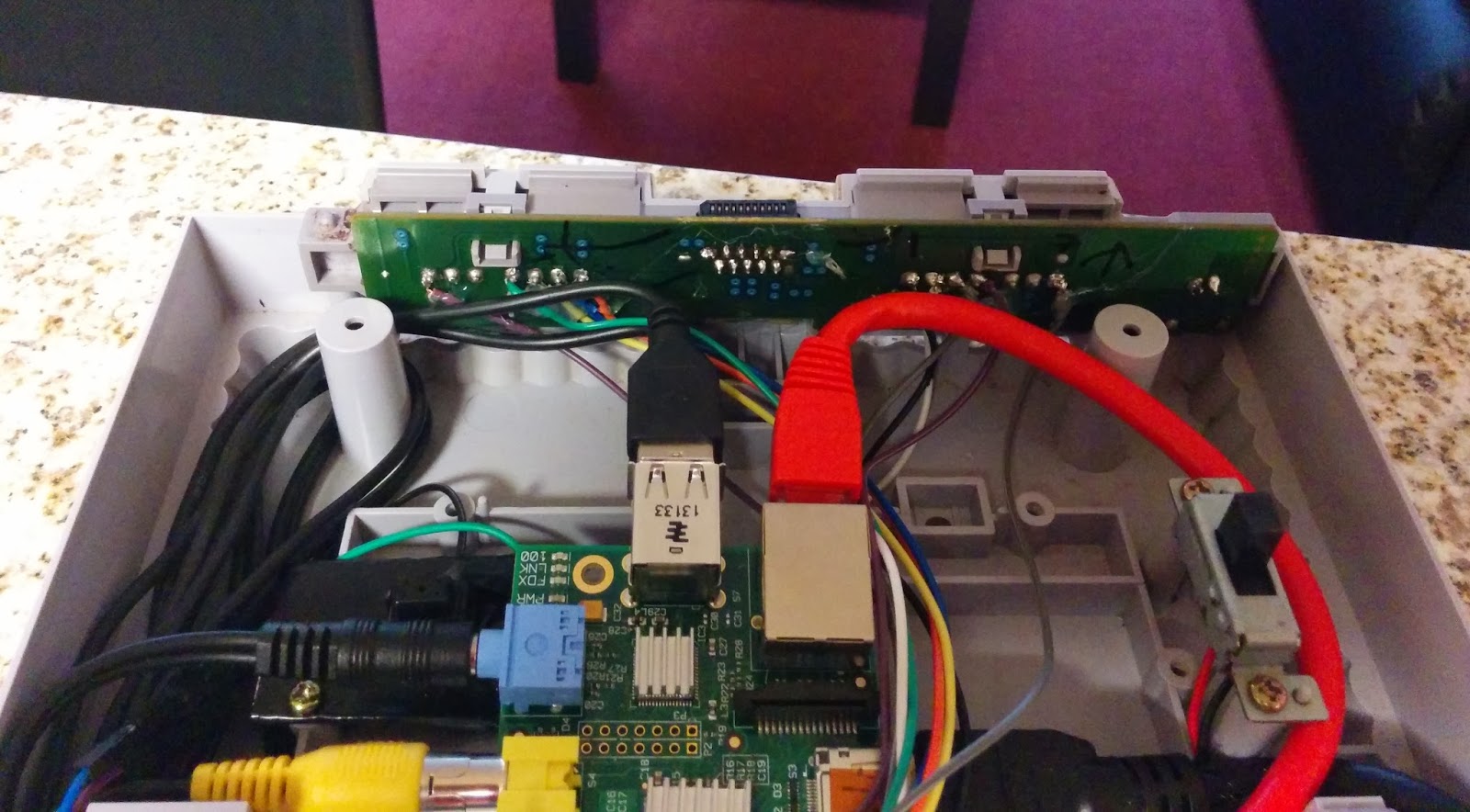 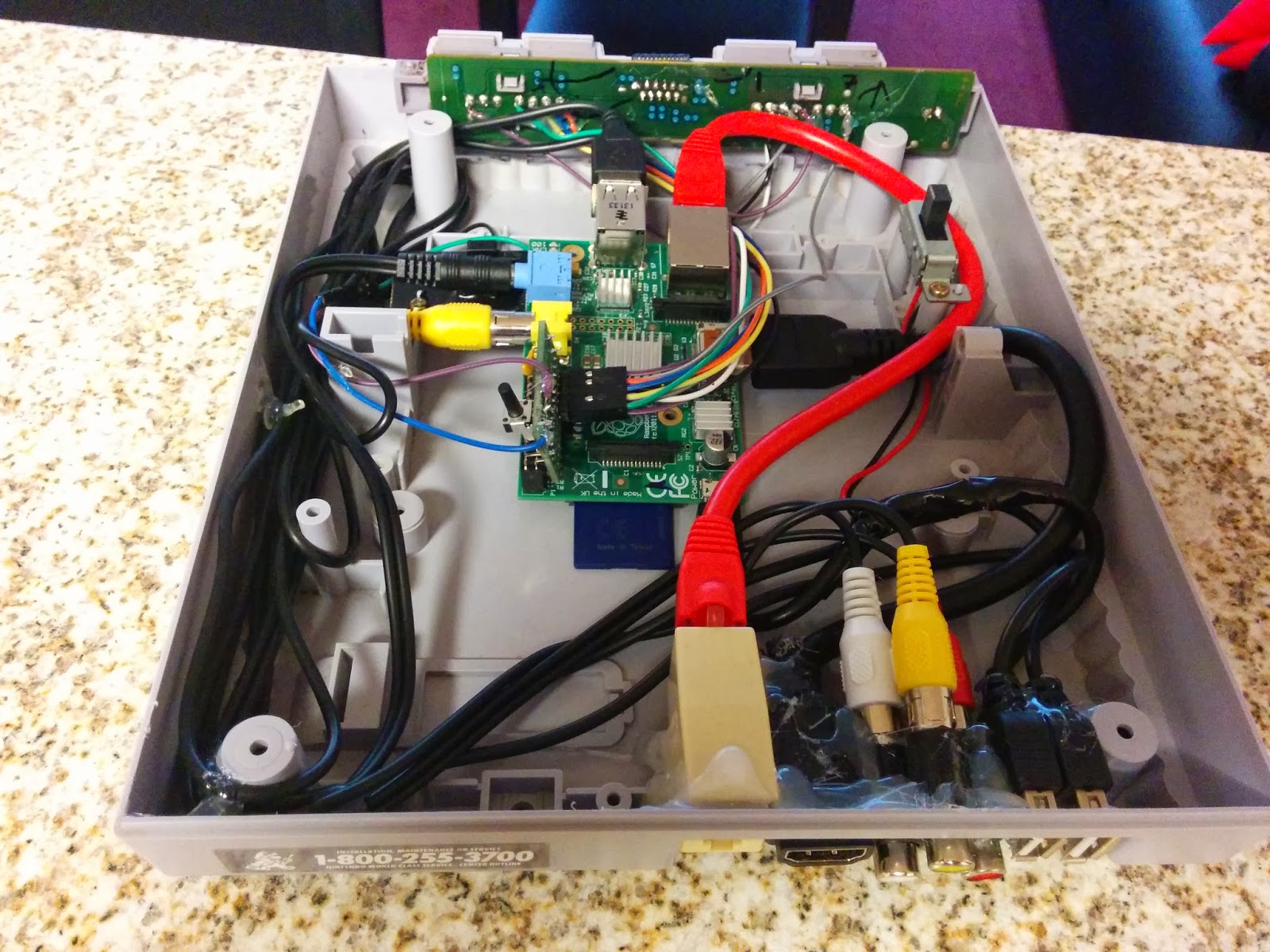 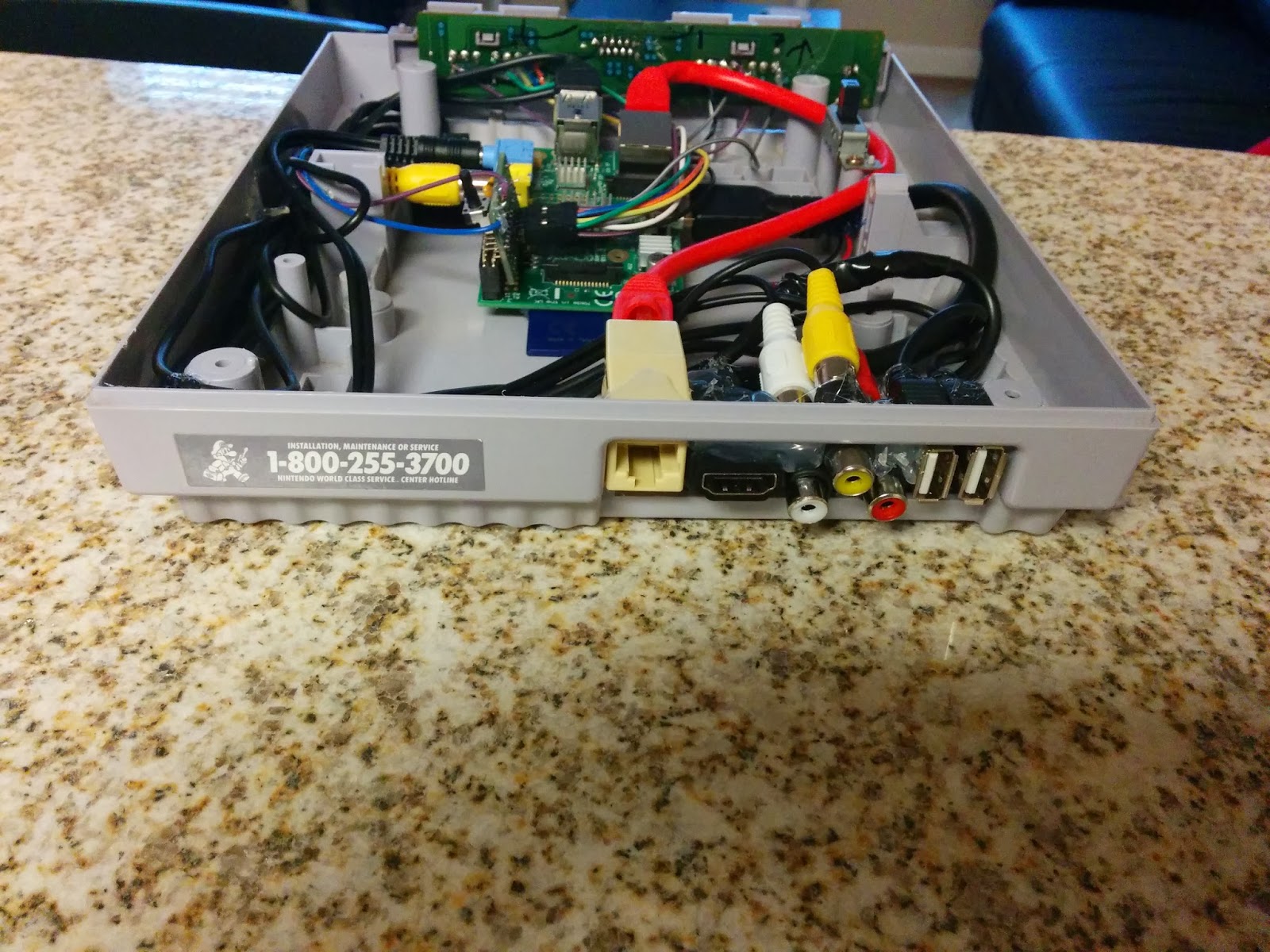 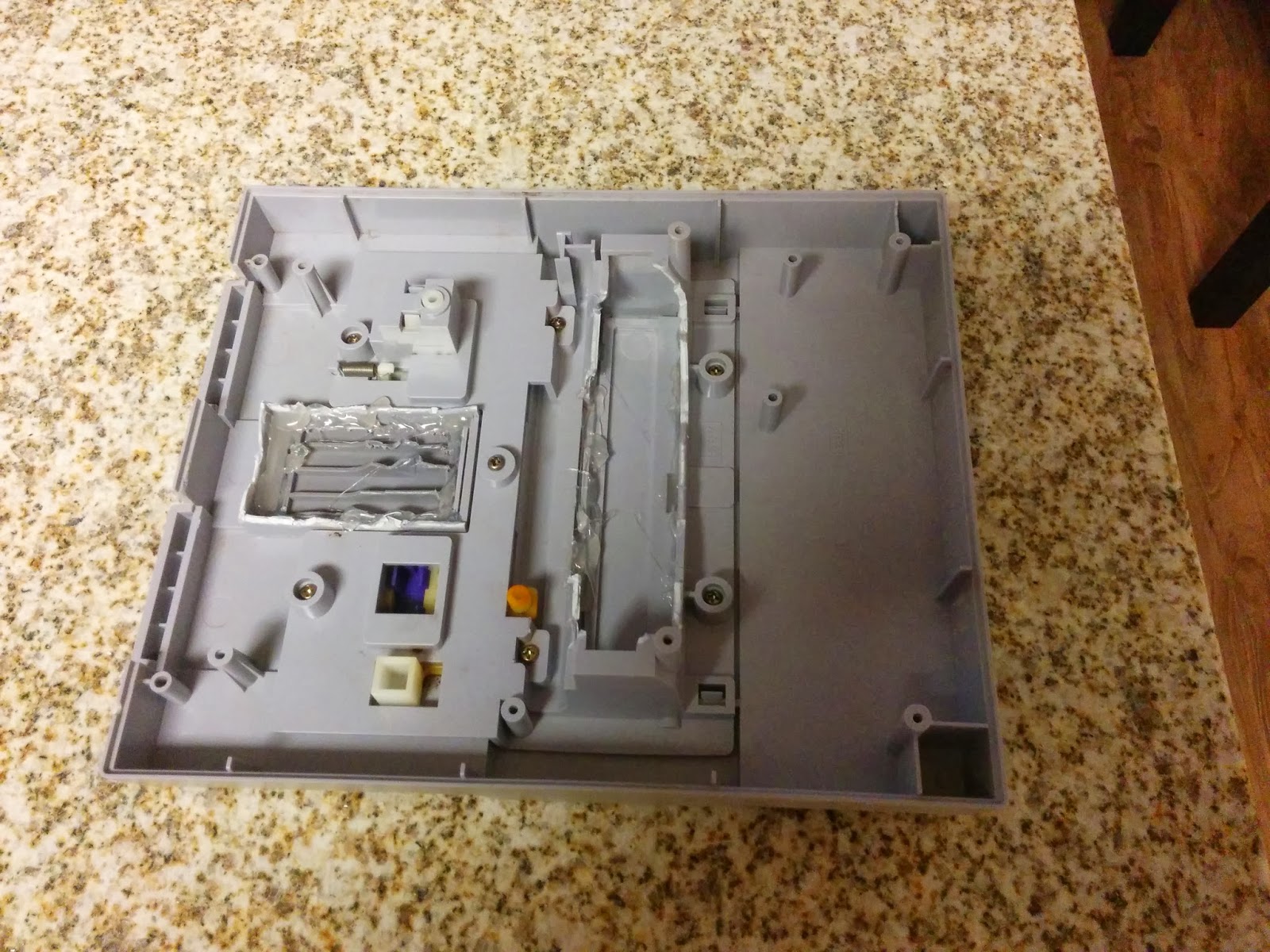 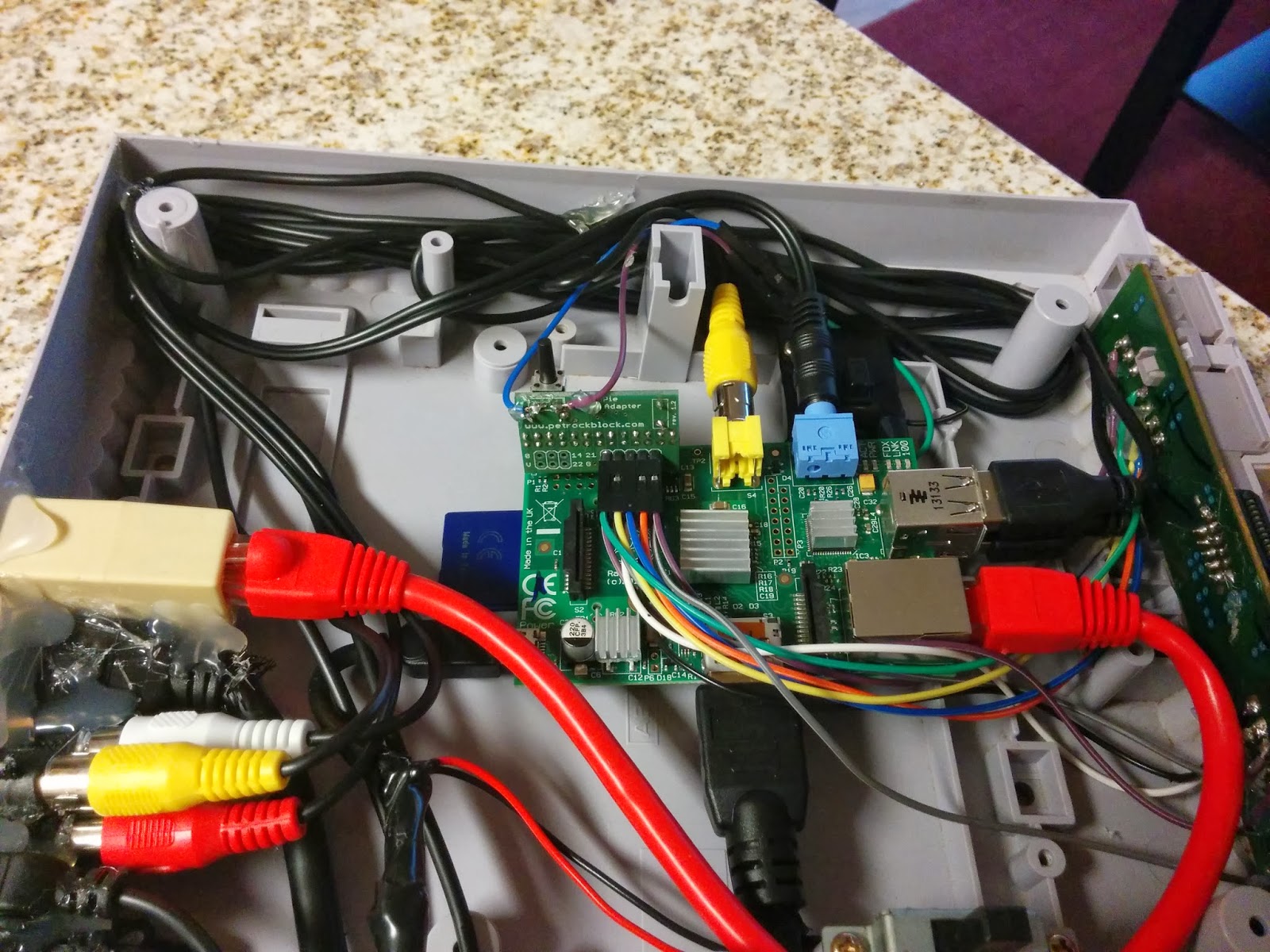 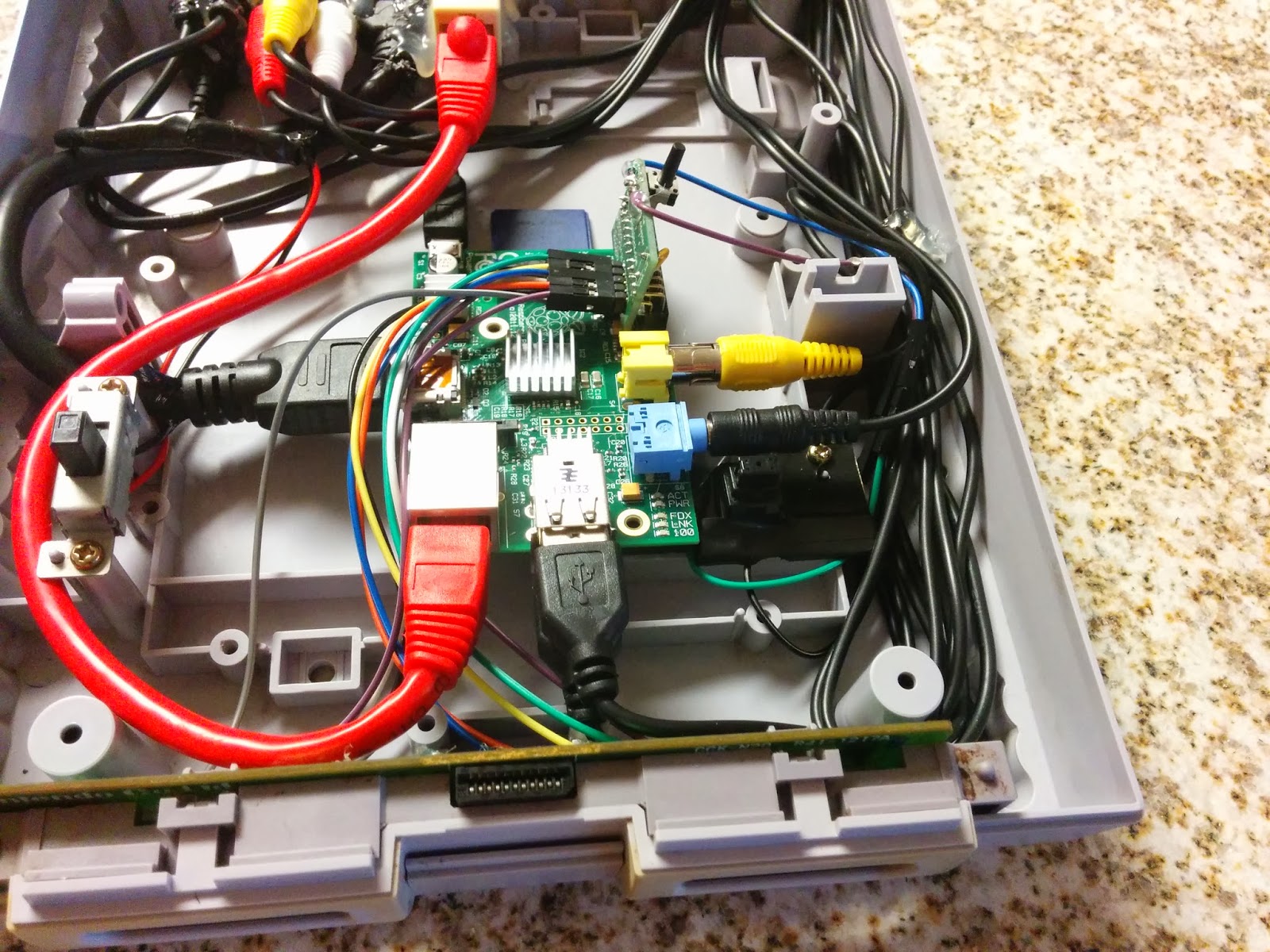 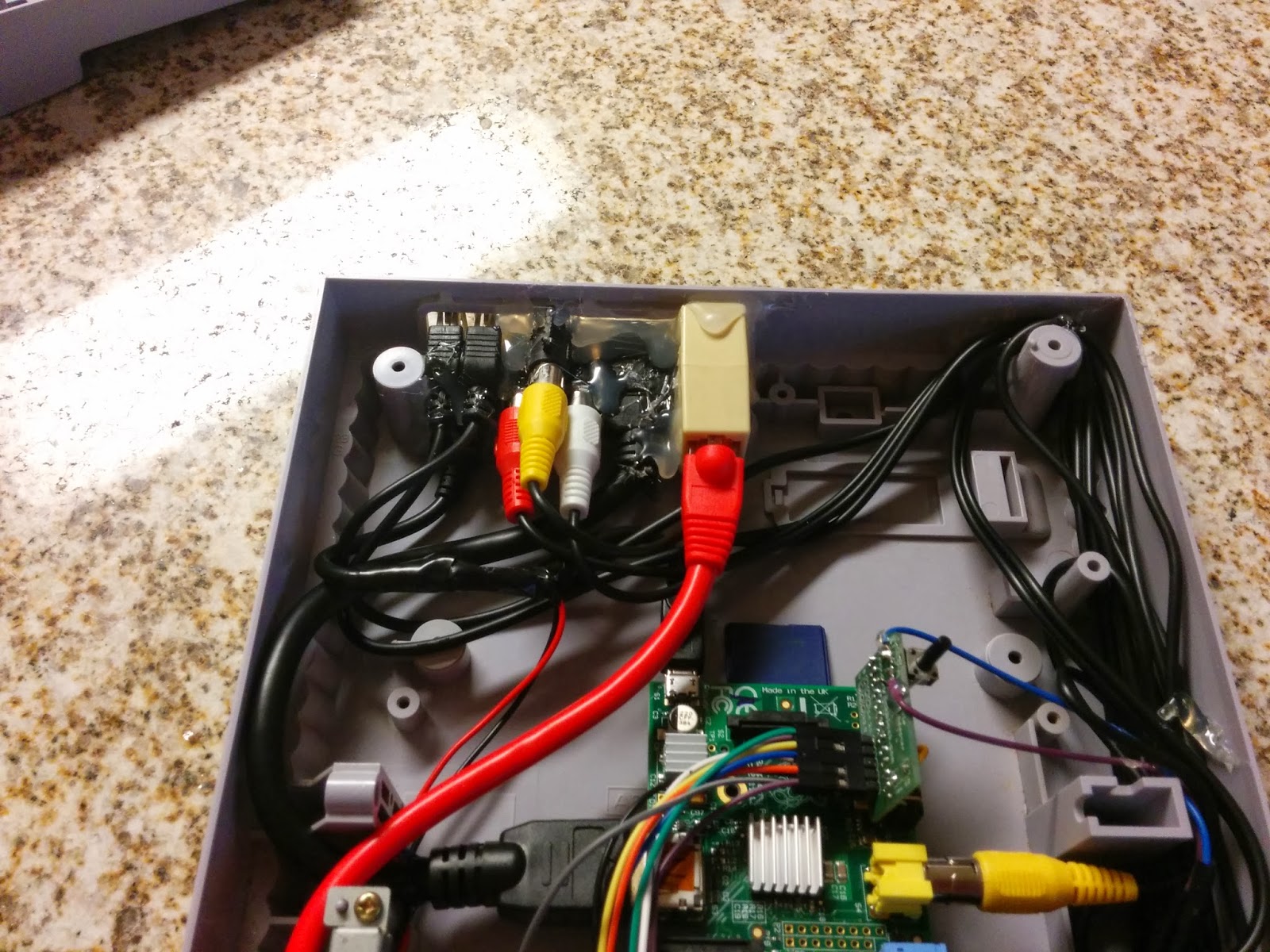 In case anyone is still looking for it, I've been messing around with the controller PCB from a SNES and have mapped the input pins to the controller pins:

(Full image here in case they shrink the above: http://i.imgur.com/v51GKha.jpg)

The SNES controller pins are as follows as well (you can find this on petrockblog like OP says):

The LED/Resistor are connected to VCC and ground as well, but I didn't mark it on the image. Pins that don't have a letter (e.g. 1) are shared.

I haven't actually done anything with this information but, when I do, I'll likely post either on these forums or in http://www.reddit.com/r/raspberry_pi (in case someone else travels down this rabbit hole like I did...).

Help, which wires from the cable go to which pins on the snes front board???

I saw this today and it kinda reminds me of what you did: