I've just finished this little project. It started as an attempt to put a Pi inside a keyboard with a built in trackpad.

I found a likely candidate from CPC for £14. However, though it's published depth was 28mm, it wasn't.
So, the next thing was to design and build a box that would accept the Pi and keyboard, together with a powered USB hub.
I found a non-powered hub in a local Poundland and noticed that it had the aperture for a power socket, though no power socket was present. I wondered if the PCB inside had the facility for external power. Well, for £1, it was worth a go. Sure enough, the circuitry was there, minus a few components. However, the 5V rail from the external power was directly connected to the 5V on the USB in.... which was a bit naughty, although easily solved by cutting the 5V wire.
A local sign maker provided the Perspex cut to size and after many hours cutting holes, filing, gluing, wire brushing and painting. This was the end result.... see pics. 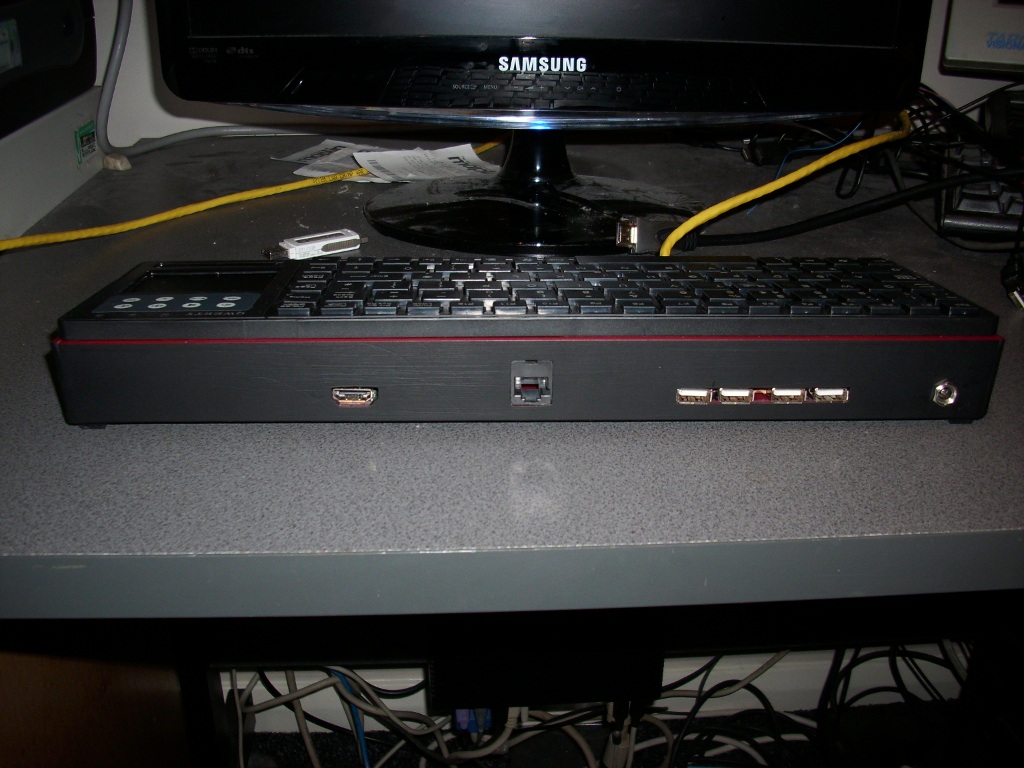 Why didn't I use black Perspex? The sign makers didn't have any, so I chose red and decided to paint it, except the top edge which gives it a pretty cool red stripe

I like it. Reminds me of the old comador64 and zx spectrum. Nice craftsman ship

That's really nice. Looks like there's even room for some AA batteries in there... hmmm...

Ravenous wrote:That's really nice. Looks like there's even room for some AA batteries in there... hmmm...

I'd say, that or a battery pack... mmmm, self powered all in one lol

Yes, there's plenty of space to put some AAs. It would require regulation, but it's possible.... though I fail to see the benefit, it still requires an external screen.

NuIotaChi wrote:though I fail to see the benefit, it still requires an external screen.

You're absolutely right, I am going through a bit of a battery fetish at the moment.

I currently have a raspi on the desk, as my Linux playground, next to my main (Windows) PC. I keep it on all the time (as the raspi uses so little power). In the same box as the raspi I have a battery pack which should keep it on through power cuts, or even if I want to unplug the thing and move it around.

So a case with space for my battery pack & DC-DC converter will be handy for me. And so many beginners come on here asking about battery backup, so a really neat keyboard all-in-one like yours would be really popular. (There was once some talk about a raspi branded keyboard & hub at one point too.)

Great Job!
Principal Software Engineer at Raspberry Pi (Trading) Ltd.
Contrary to popular belief, humorous signatures are allowed.
I've been saying "Mucho" to my Spanish friend a lot more lately. It means a lot to him.

The keyboard is USB. One port plugs into the keyboard, the other goes to the hub.

will you build these for other people?

With the hours of work that went into creating that one, I don't think it would be financially viable

However... a local computer shop and Raspi bits producer & supplier has shown a glimmer of interest in the possibilities of manufacture. I think it all comes down to how many people would want one and how much they were willing to pay.
I think the whole thing could quite easily be vacuum formed, though the red stripe may have to disappear (although I have wondered about the possibility of vacuum forming two laminated sheets).

If anyone is seriously interested in having one, it might be a good idea to add a comment below together with the price you'd be willing to pay.
If I get a positive response.... you never know