Finally getting round to documenting my slightly ridiculous Radio-4-Matic hack: https://hylobatidae.org/?action=articleinfo&id=52 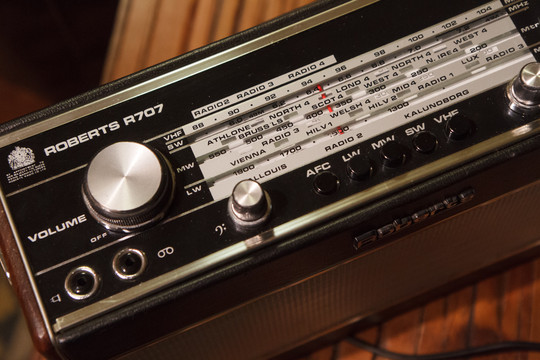 From the outside, it's a 1970s Roberts radio, playing BBC Radio 4. At 6pm, it provides the Six O'Clock News. Only the 6pm is Seattle-time, not London-time - it's streaming radio over the internets, tunnelled over SSH, then storing it (all eight-hours-plus) and playing it back at the appropriate timezone-adjusted moment.

It's a little surreal in action - waking up to the Today Programme in the morning, many thousands of miles west of the UK? Definitely!

I'll be posting loads of implementation notes as I write things up - I made quite a few useful discoveries on the way. Plus I'll post the (monstrously hacky) scripting I wrote to glue together various disparate utilities in a super-resilient way - but for now, here it is!

Part two has just gone up - more of a detailed article on how I didn't tear the innards out of a vintage radio. That would have been cruel...

What a great idea. Have you considered hooking up a GPS dongle to get your location so that the time delay can change itself based on where you are? i.e. if you move, it would automatically pick up the right delay to use?

or, indeed, could you use the dials on the front to somehow set the delay?

Location can be worked out from IP address. Do a search for "IP based Geo-Location". Seems accurate enough to get time-zone with a good degree of certainty.

Wow - wasn't expecting this much attention, what with the front-page and all - hello everyone!

The mention of automated timezone retrieval made me think about a more 'packaged' version of this gadget. (At the moment, it needs SSH access to get things going, it's hardly a power-up-and-leave-to-buffer device.)

WiFi configuration options (base station ID and key) in a text file on the FAT32 boot partition, then using DHCP and NTP then geolocation to get networking, time and timezone - presumably I could have a read-only partition with a cut-down Linux installation for the software, then a difficult-to-corrupt FAT32 partition for the data? Might make powering-down easier...

Another idea I've had - to avoid modifying the radio too much, have it all remote-controlled - via an utterly prehistoric TV remote control. Anyone know of something with chrome, wood effect or similar?

You have to admit there's a certain irony in listening to "In Our Time" - at your time not theirs!

For the remote, you might be able to find some wood-effect plastic covering of some kind. I assume the radio itself itself was covered in something similar, it was popular at the time. (I vaguely remember many TVs and stereos looking like that.)

I was literally thinking about how to set this up this morning for a friend who has moved to the States - admittedly on a vps and further streaming rather than a pi but maybe a pi could be a good idea.

Thanks for the guides so far

It's still (just) Friday, according to my radio. So here's part three, with software! Super-open MIT licence, for people to build on.

Ravenous - the radio is in really, really good condition - it's got all its wood, chrome and Rexine intact. (Well, apart from me accidentally stabbing the latter fake leather with a soldering iron. Surprisingly little damage, fortunately.)

alexjj: if anyone finds better ways of doing anything, I'd love to know. Also, if anyone builds their own Radio-4-Matic - please post photos!

I have followed this with interest and started building my own. The 70s radio I had and, with a little work, have managed to put the Pi to work with your scripts. It works! In my case, no time delay unless I put one in for delayed playback (say I was away for a couple of hours). SSHing in to set that is no real pain.

Now to find a stream from a station in Oz or New Zealand to try out the full 10/12 hours delay.

campi: nice one! Together we shall create an army of wireless wirelesses.

And you'll be able to listen to it again in a few hours.

BrianW wrote:And you'll be able to listen to it again in a few hours.

(Some of the more technical stuff got edited out, but it really brings over the main reasons why I built this beast. And yes, I cheated and listened to the actually-live version...)

That is *unbelivably cool*. I've just listened to your bit - congratulations! I've updated the post on the main page.

I like this project very much. I worked on actual Roberts DABs back in the day, and I could have done so much more if the core had been Raspis (or even just ARMs). The RD-22 would have been an easier project with a bigger core. Anyway brilliant stuff with such an original idea.

Quick update - now with full AC power for everything, with the whole lot running off a single 12V power brick.

(Previously the radio side had been running off batteries. Which lasted for an amazingly long time - audio amplification was only starting to get a bit faint by early June. 1970s electronics - scary.)

Just stumbled on this and wondering if people are still able to get this going, due to the bbc stopping non uk ip addresses from dumping the streams? I think anyway because mine isn't responding??

Been dabbling with adapting Adams php to use mplayer to dump, instead of get_iplayer, but not too hot on the code...

any update would be good