Hi there, people with more knowledge than me

I need some help with adapting some wiring.

Now, I probably should have known better when I saw the HDMI label on it... I'm hoping that it is still decent definition, but I have a bit of a cable problem.

Here's a picture of the whole package: 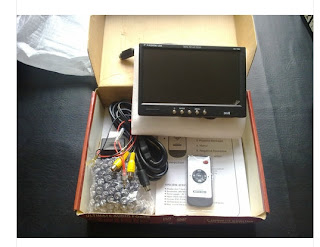 Here's a couple of close-ups of the cable that attaches to the cable that comes out of the bottom of the screen. It's got 6 pins and looks a bit like a PS/2 cable. I _think_ it's a 6-pin DIN, but I could be talking out of my bum. 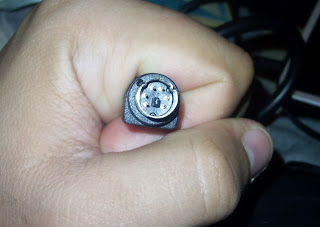 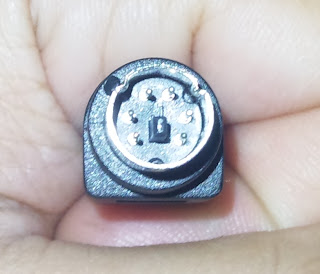 and one of the cable pack that comes with it. 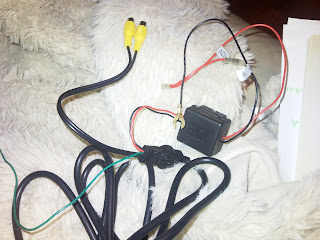 So, there's a ground wire (black) and a 12V wire. Now, obviously it's a car rear view screen, so it's expected that the 12V wire is supposed to be connected to the rear tail light and then another wire goes back to power the tail light.

What I really want it to run it off the mains.

I have another screen that is _very_ similar, but has an adapter on the end for a 12V mains power supply (which I've got). Here's the display: 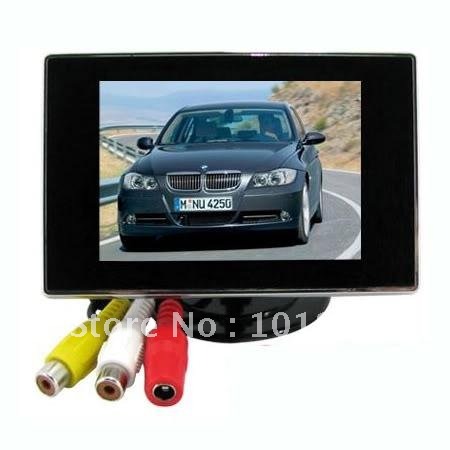 And a close-up of the cable ends that I want to have for the new screen: 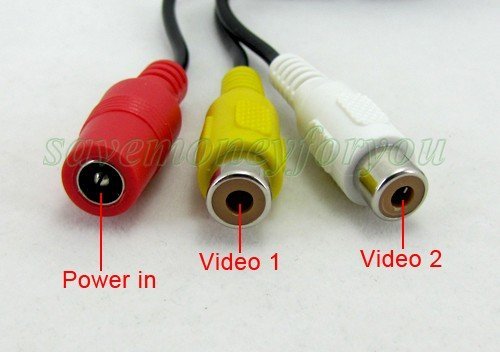 And this shows what the whole cable looks like on mine - note the little gadget that is on the live wire (which has a fuse inside it):

What I've done so far is to take the connector off the end of the 3.5" cable (the end that goes into the screen box) to reveal a red (live) wire, a ground and a yellow and a white (which must be the two composite inputs).

Now, what I think I have to do is to cut open the new input cable (with the 6 pin male connector), separate the wires and solder them to their equivalents on the 3.5" cable.

Does this sound right? I'd rather not a) blow the mains b) blow my head off c) blow the screen up d) blow the Pi up.

Hope someone can help.
--
Mike
My Raspberry Pi blog with all my latest projects and links to articles
http://raspberrypipod.blogspot.com. +++ Current project: PiPodTricorder - lots of sensors, lots of mini-displays, breadboarding, bit of programming.

The "ps2" cable you're holding is a S-VHS cable and will not help you in any way with regards to HDMI...
You will only be able to use the screen with analog Y/C (RCA connector).
Raspberry Pi - finally a worthy replacement for A500!!!

Yes I recognise that. Its powering it from the mains Im having trouble with. Any ideas?
My Raspberry Pi blog with all my latest projects and links to articles
http://raspberrypipod.blogspot.com. +++ Current project: PiPodTricorder - lots of sensors, lots of mini-displays, breadboarding, bit of programming.

Why not cut the red and black wires here :

Right after the fuse?
Then solder these to the red and black wires from the first display?
Then you can use your second display's mains power supply.

You won't fry anything unless you solder the two wires together or the other way around.
I guess red to red and black to black should guarantee success.

Does your display really provides a HDMI connector? (the first one).

I have a very similar monitor. To connect the red and black wires to mains socket, you need a soldering iron and a few extra parts. Here are some pictures of how mine is connected.

Well, so far so good. I've soldered the power wires of the two sets I have together and the screen turns on and doesn't kill me with huge bolts of lightning. Which is good.
Need to test the input, but that'll have to wait til tomorrow as I don't have any insulating tape and I'll need to move the thing before I plug the Pi in. Not sure what's up with my bloody soldering iron - the tip doesn't melt anything, but the rest of it does! I hate soldering with a passion!

Anyway... wonder if anyone knows the answer to this...
The composite video cable has a wire inside a yellow sheath, and then a black sheath around it. Between the black sheath and the yellow cable is more wire... Is that important, or can I just twist it with the yellow wire?
My Raspberry Pi blog with all my latest projects and links to articles
http://raspberrypipod.blogspot.com. +++ Current project: PiPodTricorder - lots of sensors, lots of mini-displays, breadboarding, bit of programming.

Not terribly sure what to do with the ground/shielding wire except seperate it from the signal wire and wrap it in insulation tape. So, that's what I've done.

My Raspberry Pi blog with all my latest projects and links to articles
http://raspberrypipod.blogspot.com. +++ Current project: PiPodTricorder - lots of sensors, lots of mini-displays, breadboarding, bit of programming.

Twist the shielding into a wire, then solder a pigtail from that to a ground.
If you leave it hanging, it wont hurt anything, but you lose the shielding properties.
I'm only wearing black until they find something darker.
Post Reply
9 posts • Page 1 of 1