I'm considering automating my dust collection system. I'm planning to use current sensing to automatically turn on my dust collector. That part is pretty straightforward.

My dust collector is 240v and 20A. There is a NEMA enclosure with Telemecanique LC1D25 contactors that use a 120v coil. There is an "on" button that I have to hold until a light comes on. I think it's a motor starter circuit. It takes the same amount of time every time so I was planning to just close that circuit with a relay for 10 seconds or so instead of sensing the light.

There is also an "off" button that I just need to momentary press.

All the relay boards I can find are 15A maximum so I'm not sure what my options are here. Is there a HAT I can purchase to do this or do I need to build something custom?

There's a DIN rail in the case so I was also looking at 20A DIN mount relays but they're all 12v so it looks like I need something in between that's powered. There's probably a more elegant solution than Pi 5v -> 12v relay -> 120v relay -> 240v contactor right?

Does your button actually carry the full 20A current through it ?

If not you won't need a relay with 20A rated contacts. It will only have to carry what current the button does carry through it.

20A and higher relays don't seem that hard to find. One exmple below - not a recommendation, just the first my search turned up -

I think it does because the diagram doesn't show any other breakers or fuses. I'm working from memory right now but I think it's just using a leg of the 240v circuit.

Thank you for your reply.

So not rated at 20A for 240V - But re-reading your original post it's not clear what the actual button is carrying, 120V or 240V, how much current.

Without a full circuit diagram it is going to be difficult to advise.

Its clear from your posts that you have no real understanding of how this motor starter circuit works, and little of no electrical knowledge or training.

I would suggest if you want to continue with this project you seek help from a trained professional electrician locally, and not from a computer forum were users can't see or interact with your hardware directly.

Mains AC voltages can and will kill you and burn down you house given the chance.

The contractor coil is rated for 120v so I think it should work. Thanks for your input.

You know nothing about me and your post is not helpful.

The contractor coil is rated for 120v so I think it should work. Thanks for your input.

How exactly is this 120V contractor coil running from 240V mains ?

You know nothing about me and your post is not helpful.

It may have been a little harsh but I would consider it fair. No one wants to see you come to harm and, when playing with mains, that's a serious possibility if something is not done right.

hippy wrote: ↑
Sat Aug 31, 2019 7:06 pm
It may have been a little harsh but I would consider it fair. No one wants to see you come to harm and, when playing with mains, that's a serious possibility if something is not done right.

It is fair. I would even go so far as to suggest that any post that mentions controlling mains voltage without using an approved device should be reported and locked with an appropriate caution.

There may well be people on here who have the experience/knowledge/qualifications to work safely with mains voltage, but who is to know of the level of skill of the reader of a post?
Unreadable squiggle

Sorry if you think I was harsh, but when you say things like " I think it works like this " , you expose your lack of knowledge.

Having spent nearly 40 years as a fully qualified maintenance electrician working on many different control systems and voltages from 12V DC to 11KV AC , I am only to aware of the dangers that others often don't see.

Even trained people make mistakes I have lost several work mates to such mistakes , I would rather not see your family have to experience such a loss hence the warning and suggestion.

But I can't stop you from doing what ever you want .

Here's the diagram from my machine. 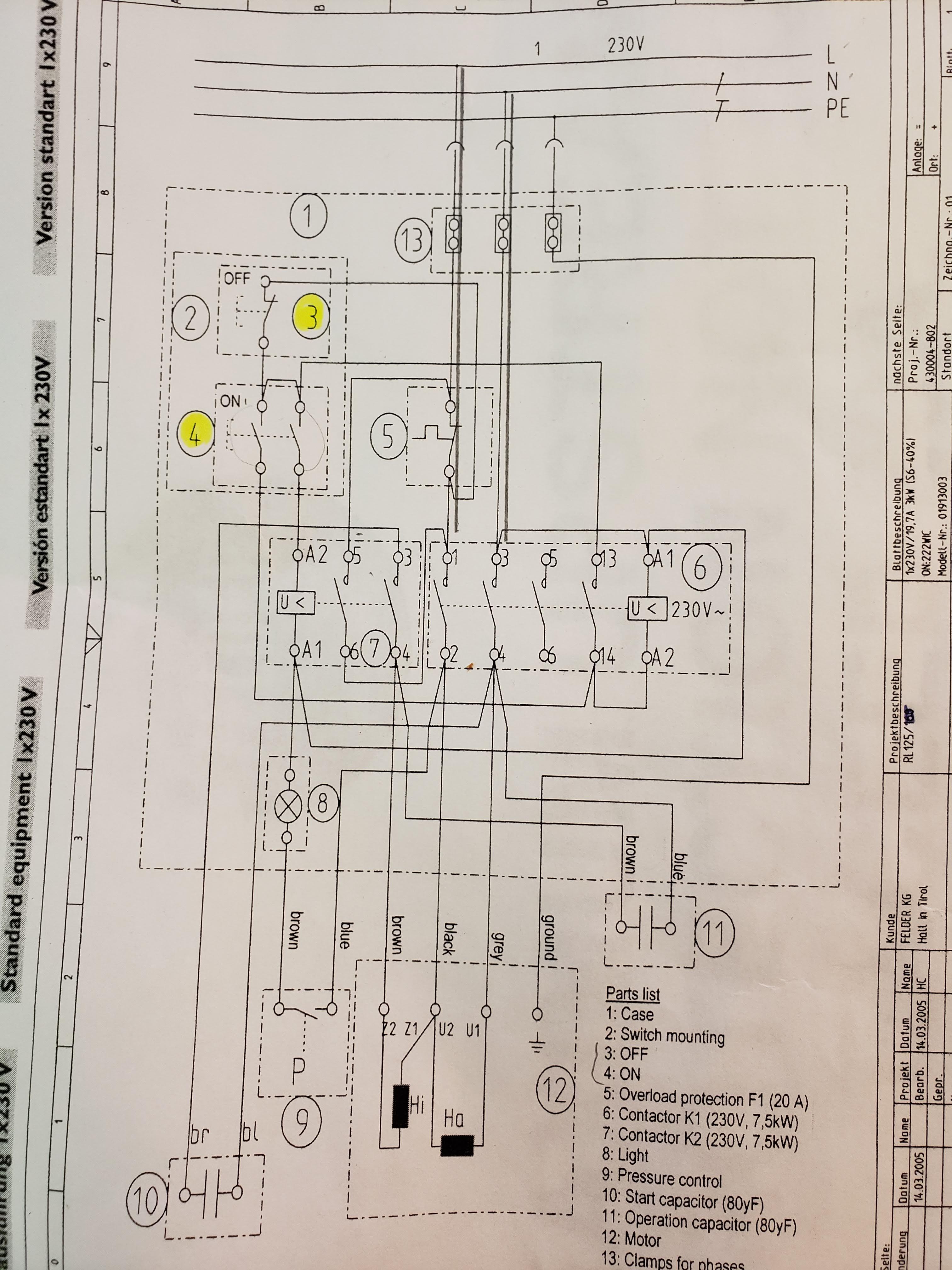 You get 240v from the difference between the 2x 120v coming in. I'll put my multi meter on it and confirm. In the diagram, a single wire is coming from #5 and feeds both switches and it then goes to both contactors which turn on both the high and low on the motor. You have to hold the button until #8 lights up.

I think I've read somewhere that it's Felder's way of running a 3 phase motor with single phase, using only 2 windings. The specs says 3kW motor which is about 4HP and it's pretty uncommon. Felder is from Austria and that was probably their clever way of adapting their machine for NA markets.

From my limited knowledge, North America motors have a centrifugal switch that does that for you.

#4 is the ON switch, #3 is the off switch. The diagram and what I see inside the machine doesn't show any breakers so I have to assume 20A on every wire.

I don't understand how the entire circuit works, just that if I put 3 relays instead of the 2 switches, the machine will start and stop. I think I might have answered my own question.

Felder has a remote starter for this machine but it's over $200 and I thought I could probably do the same with a spare Pi or arduino, $20 worth of Chinese boards from Aliexpress, curiosity and a willingness to learn.

I have no idea what this "2x 120V coming in" refers to but that's not how single phase 240V mains works.

It all rather confirms pcmanbob's assertion that you are out of your depth.

rpdom wrote: ↑
Sat Aug 31, 2019 7:17 pm
I would even go so far as to suggest that any post that mentions controlling mains voltage without using an approved device should be reported and locked with an appropriate caution.

The problem with doing that, as I know from having to deal with such posts on forums I admin and from what I have seen in this forum, there will be instant cries of "censorship", accusations of strangling free speech, of trying to wrap people up in cotton wool, stifling learning.

It all rather confirms pcmanbob's assertion that you are out of your depth.

I think you're probably used to 240v for all your appliances. Here's the wikipedia explanation for what I am talking about.


Many areas, such as the US, which use (nominally) 120 V, make use of three-wire, split-phase 240 V systems to supply large appliances. In this system a 240 V supply has a centre-tapped neutral to give two 120 V supplies which can also supply 240 V to loads connected between the two line wires.

the diagram is confusing because it's adapted from the Euro version of this machine. "N" on the diagram is hot (120v) and there is no neutral.

I think I've been told one time too many that I'm out of my depth so I will end this conversation here and work on this on my own. Thanks for trying to help, I know you all mean well.

The problem is that it does not appear to be a diagram of what you actually have.

With split-phase systems, with no neutral, live-to-live, across which the motor is connected, would presumably still be 240V - otherwise it could be done with a single phase, live and neutral - but I will admit I am not familiar with such systems.

The full specification, the 'xx' of the "LC1D25xx" contactor, will indicate what its coil voltage is, what voltage the switches will be carrying.

I would suggest you don't work on this on your own, but rather find someone close by who is familiar with equipment such as this to help you.
After all, letting loose a bunch of kids in a library isn't the way to teach them to read - letting a kindergarten teacher help them works better.

But it's also worth noting that Astrophysics professors aren't usually much help to English Literature students.
That's possibly why this forum, majoring on a small computer, hasn't been much help to you regarding high-power mains equipment.

Looking at the diagram provided; the answer for that would appear to be "no".

For that diagram the buttons will be rated for carrying the combined in-rush currents of the coils in the two contactors (6) and (7).

Any relay contacts used in the button part of the circuit would have to be similarly rated.

That rating can be determined from the datasheets of the contactors.