In this posting I used my new 100MHz logic analyzer first to measure 10KHz PWM signal created by Pi Zero (can I trust the logic analyzer?), then to verify 26.21MHz square wave frequency generated by this

Pi Zero program (based on WiringPi library code analysis and leaving only the base minimum) and measured with Arduino Due tc_lib library before, and finally to measure highest hardware PMW frequency PI Zero can generate (19.2/4=4.8MHz).

Today I wanted to know how exact the measured 4.8MHz (with 100MHz sample rate) are, and how different two Pi Zero measured the same time are. I did measure 1 second (roughly) @100MHz, both Pi Zeros on pin GPIO12, and both initialized for PWM by these steps:

This is the left end of the measurement zoomed in (right click for details):

This is a view where both Pi Zero curves are opposite:

And this is the right end of the measurements:

You can generate higher frequencies than 4.8MHz with hardware PWM.

thank you for that link, you were right, higher frequencies can be achieved!
I thought the "gpio" frequencies as integer divisors of 19.2MHz were hardware PWM.
Minimal range is 2 (with "1" specifying 50% duty), minimal clock divider is 2 (1 results in 5KHz only).
Thus maximal frequency with "gpio" command is 19.2/(2*2)=4.8MHz.
But that must be software PMW because hardware PWM achieves much higher frequencies.

What I saw with 100MHz logic analyzer is that only integral divisor of 125MHz frequencies look good.
The highest "perfect" frequency is 25MHz:

I got that 400Msps logic analyzer as christmas present, nice!
I used Pi Zero again to play with it: 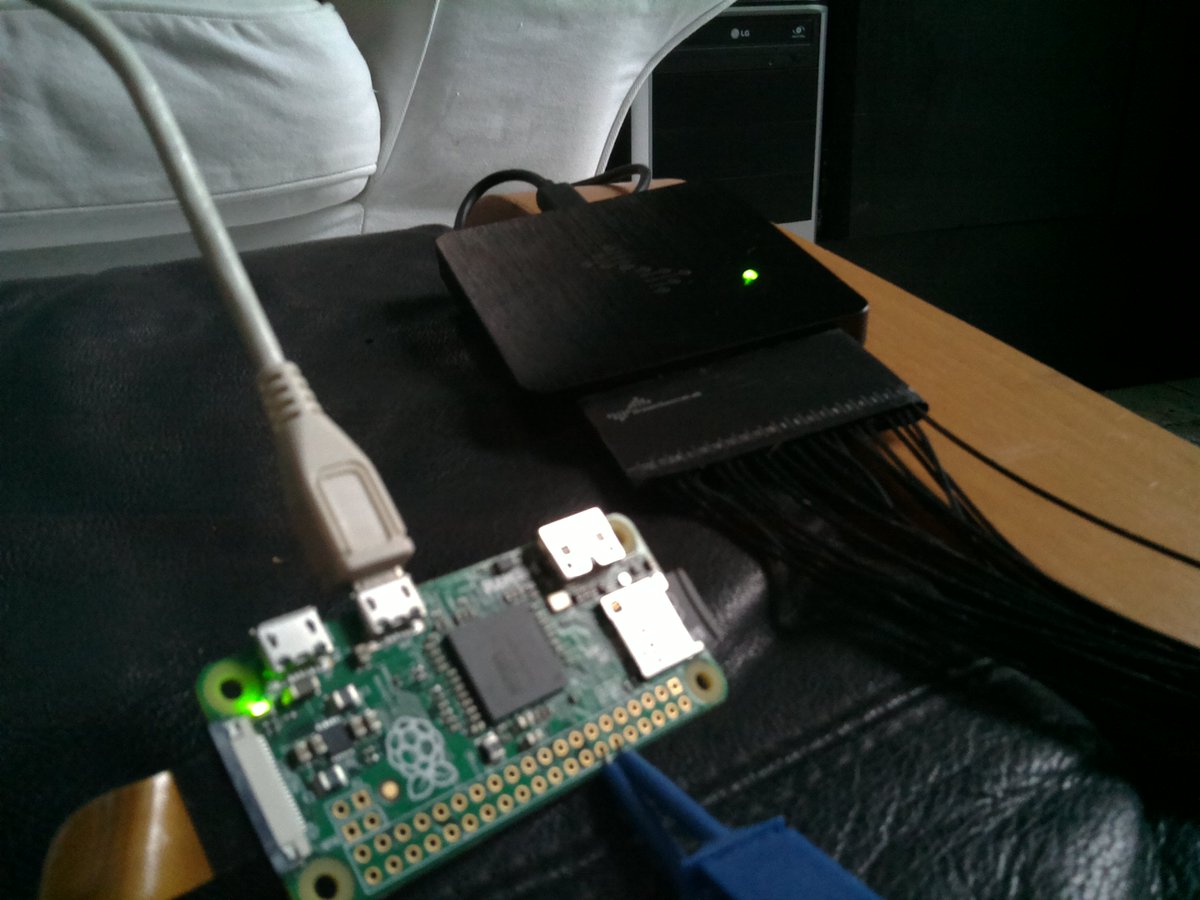 I was not sure whether Pi Zero generated these little peaks, or something else was responsible.
I read that the logic analyzer has shielded cable fly line connector.
So I tried to separate both cables from above photo and used another GND pin of Pi Zero.
This works fine with 400Msps sampling: 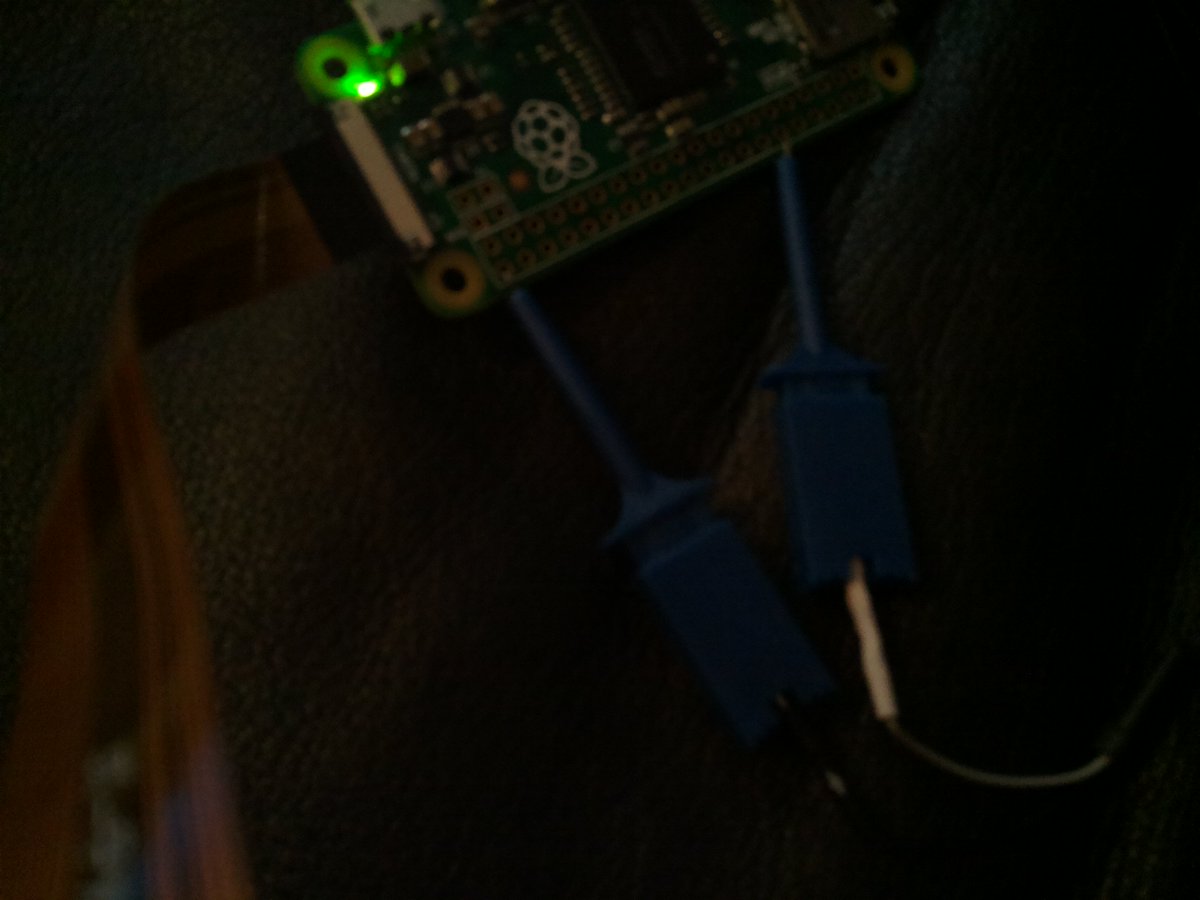 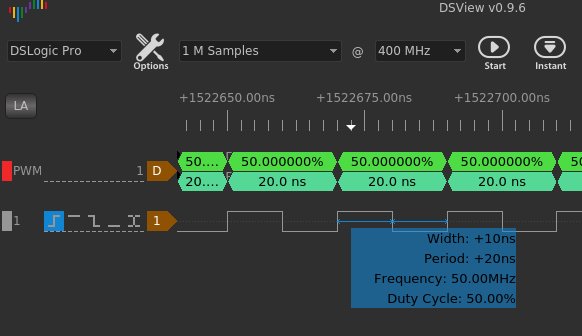 Does the 50 MHz signal look clean? It is rather faster than the GPIO are expected to reliably work.

I took 1M samples @400Msps several times and on two different Pi Zeros just to be sure. I found no way to save period and duty cycle in a single file, these two files are a sample of Pi Zero 50MHz measurement for above 50% duty cycle pigs command:
https://stamm-wilbrandt.de/en/forum/pwm ... period.txt
https://stamm-wilbrandt.de/en/forum/pwm_50MHz_duty.txt

Gnerating 125MHz signal seems to be clean as well, but for measuring this cleanly more than 400Msps are needed:

That's a surprise. I had assumed the GPIO were only good for about 30MHz (because of electrical pad considerations).

If you're not driving any appreciable load (e.g. logic analyzer inputs) and you are only toggling a single pin, it's quite possible to get a "reasonable" logic-level signal at up to ~100MHz. It'll be more a sine wave than a square wave so the edges will be poorly defined, though.
Rockets are loud.
https://astro-pi.org

I just wanted to come back to the above remark:
The precision depends on what your basic time source is. In the Raspberry-Pi that is the crystal oscillator: 19.2 MHZ.
Thus the 500MHZ PLLD is running faster and gives smaller steps but as it is ultimately derived from the 19.2 MHz
it has the same accuracy. In effect it is less accuracy as a PLL frequency is derived from a control loop which
will always jitter more then the reference frequency it compares against.

This function is only valid if the pigpio main clock is PCM. The main clock defaults to PCM ... The actual frequency set is 250 million / steps.

Maximal frequency that can be set with HP is 125,000,000. So PCM clock is 250MHz?
⇨https://stamm-wilbrandt.de/en/Raspberry_camera.html

This function is only valid if the pigpio main clock is PCM. The main clock defaults to PCM ... The actual frequency set is 250 million / steps.

The clock is 500MHz. The minimum divisor is 2 so the maximum clock rate is 250MHz. PWM is pointless if you can't at least have one step between on and off which is why the limit become 125MHz.

But 400Msps logic analyzer is not capable to display that, smallest period on it is 5ns, whereas 250MHz corresponds to 4ns period.
⇨https://stamm-wilbrandt.de/en/Raspberry_camera.html

That was partially true, it did work on family computer in living room with Ubuntu 14.04 (see photo above).

It did not work on RHEL Linux, nor on very old Thinkpad T42 laptop with Ubuntu 12.04.

Today I tried again to compile DSView software on the T42.
The problem was that the required package "qt5-default" could not be installed under Ubuntu 12.04.

First I downloaded "i386" iso image from:
http://de.releases.ubuntu.com/trusty/
Then I stored that (1GB) image on a USB stick ("sudo dd if=ubuntu... of=/dev/sdc").
Finally I booted from USB stick (click "Access IBM" key on startup, press F12 and select USB media to boot from).

After appending "forcepae" to boot line Ubuntu 14.04 did boot and started from USB stick without issues.
I clicked "install Ubuntu" icon there and after installation the reboot came back successfully without any actions needed.

The next step was to download and install DSView software, worked exactly as described in INSTALL file.
Then I downloaded and installed Arduino IDE.

400Msps logic analyzer worked easily, and the old T42 is no problem because all data gets captured inside the logic analyzer first, and only after the capture ended, the data gets downloaded to the laptop.

Good to have this old laptop for 400Msps logic analyzer, work with Arduinos and ssh/scp into Raspberries.