Just wanted to see the different SD cards people have opted to use for their Pi's. Surprisingly I have been mulling over how much I should spend, looking at read/ write speeds and so on.

If you could reply with the SD card you opted for, why you did and how well it runs that would be great

Kingston tech 8gb card from amazon about £4.15 or so. works v well

Can anyone recommend a decent card reader for 8Gb+ cards?

I've tried a few from ebay and none of them will see my Kingston 8Gb card.

Thanks - will have a look tomorrow!

I've so far only used Debian Squeeze (The latest update at the time of posting). At the moment their £8.50 on AmazonUK delivered, so very cheap too. 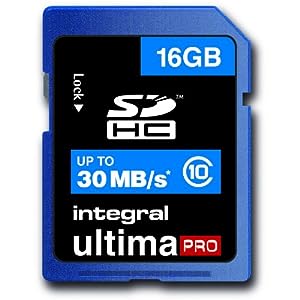 I tested Kingston SD10V/16GB with RaspMC base image and it did not work at all. Halted on a formatting partitions screen with

I got Kingston SDV10/16GB and it doesn't work with R-Pi too.

You could look here: http://elinux.org/RPi_SD_cards#Verification

Be aware that there are quite a few reasons why cards don't work, so results are not guaranteed

This may or may not be of help to this thread, but it relates to similar problems with SD cards.
A few weeks ago, shortly after getting my RPi as a gift, I got a PNY 8GB class 10 SD card. I tried to write an ARCH LINUX image to it using that Win32DiskImager program, but it wouldn't work. It kept reporting that the SD card was write protected. The installation guide I was reading suggested that if the Win32DiskImager program didn't work, that I should try a flashnul program. So I downloaded that program. It wouldn't work either, with the -L option used to write images to the disk, so I decided to wipe the card clean with either the -B or -F option (I can't remember which). After wiping it clean, the card no longer showed up as being write protected, and the -L option worked. I later used flashnul to save what was on the card, and re-load the image. So flashnul proved to work well that time.
Yesterday, however, I decided to try out the Wheezy OS, so I got another SD card, a Pretec card sold by the same dealer that sells the RPis, again, an 8GB class 10. I plunked it into my computer, and first erased some photo recovery program on the card, then tried to use flashnul. Wouldn't work. Write protected. I tried everthing I did before, but nothing worked. I found that the card wasn't write protected in my wife's Win7 computer, but it WAS in my XP computer, but she didn't want to risk using flashnul. I tried an old USB card reader, but the card wasn't even recognized in that. Tried an old video gadget which took SD cards, but it wasn't recognized there either. I googled, and found many people suggesting sliding the lock switch on the side half way to the locked position, and/or putting tape over the whole switch area. The sliding the switch half way actually worked, and allowed me to write to the card, however the card wouldn't boot in the RPi. I then tried again with tape over the switch, but that caused the card to show up as write protected. Finally, I found a camera that used SD cards, connected it to the computer via USB, and used flashnul to wipe the card clean. However, it still came up write protected in my computer. So I wrote to the card via flashnul again using the camera as a holder. The write said that it was successful, however the card wouldn't boot up in the RPi.
Finally, I decided to try a few more SD cards in my computer, and ALL of them showed up as being write protected! So I rebooted the computer. Now, all of them were writable. Apparently that Pretec card with the program must have somehow put my computer in a state where it couldn't write to any SD card!?!?!
However, when I tried once more to write to the card, again, again the write seemed to be successful, but it wouldn't boot in the RPi. So I extracted FROM the card to the computer to compare what I had written to what was in the original image. In the original image, there was one page with some content, then a BUNCH of all zeros, till near the end of the file, where most of the data was. With the file that I extracted from the SD card, the first page of data was identical to what was in the image file, but after that, it was all zeros!?!?! Apparently nothing was written after that first page.
So at that point, I went out and bought a new USB card reader, a Vivitar, found at Staples for ~$15. I again used flashnul, and wrote the image to the SD card. Wouldn't boot. Tried another SD card. Card wouldn't boot. At this point, I was really confused, and didn't know what to do. Then, I thought, why not try that Win32DiskImager program that wouldn't work the first time I tried loading images. Sure enough, it worked first try. Card booted up fine in the RPi.

I don't have a clue re why Win32DiskImager wouldn't work, but flashnul would work, the first time I burned an image, but flashnul wouldn't work while Win32DiskImager did work this second time. None of this made any sense at all. Since I have no idea of what caused the card problems, this post isn't of much help to anyone, but I thought it might at least show a few things that can go wrong writing to SD cards, and a few things to try, and that if you keep trying eventually you find something that works. Also, apparently these new SD cards don't seem to work well in old card readers or old computers, so you may need a new card reader, and the Vivitar model sold at Staples seems to work well.

jurmelius wrote:I tested Kingston SD10V/16GB with RaspMC base image and it did not work at all. Halted on a formatting partitions screen with

me too have the same issue with Kingston SD card (Kingston SD10V/8GB Class 10) .. I tried "wheezy" / raspbmc / openelc / xbian nothing is working...all are giving one or another error - all related to I/O operations... Only openelec is booting but that's it..no add-on can be installed / no proper internet connectivity etc.

I bought this as I saw this model is marked as working in the wiki.. Also this card is detected by only windows 7 and sometime detected by XP.. not persistent.. looks like problem with my SD card and I need to change this...
Post Reply
16 posts • Page 1 of 1