I have no idea what I'm doing

I have no idea what I'm doing

I have absolutely no idea what I'm doing, or how I'm going to do anything with the Pi, but I do have hopes of turning it into a media center for streaming movies from my primary PC.

I have about 15 minutes experience of Ubuntu, my main PC runs Windows 7, but I'm willing to learn.

So where, and how do I get started?

I wouldn't have thought the machine would have been suitable for that application. I doubt the CPU or network subsystems are fast enough.

Why not just stream from your primary PC?

For absolute beginners, there is a lot of information in the free MagPi magazine.
www.themagpi.com

To stream movies, you will probably need to use one of the XBMC distributions. Search this forum for XBMC.

Yeah, for a complete novice, you're probably looking at an XBMC install - such as OpenElec, RaspBMC or the newer XBian (see the MediaCentre/Gaming subforum) - you simply have to download an image, flash it to your SD card and away you go!

Not sure about streaming, but as commented above, the Pi may struggle. I'm using XBian/OpenElec to output directly to my TV via HDMI -mounting the library from my NAS, and it's working very well, but I think streaming might be a step too far.

That said, XMBC will certainly allow streaming via uPnP, so give it a try!

welcome to the fourms sakai4eva. The XBMC install is definitely the way to go for a beginner. It really is as simple as worm says, you can have XBMC running with no knowledge at all of Linux.

bredman's suggestion of MagPi is excellent . Issue one is worth a read before you start anything - it shows you how to flash the SD card, has lots of basic info about the machine and there's absolute beginner's courses on Linux etc (in fact it should come in the box!

On the streaming issue, I've had no problems with streaming video *from* my Pi to my (multiple) PC via Samba and doing it while playing video on XBMC without overclocking. I would imagine that streaming *to* the pi would take less power than what I'm doing, but I haven't tried it yet.
Dear forum: Play nice

Thanks for all the response. I have slightly enlightened myself over the past few hours and perhaps I wasn't clear on the terminology I was abusing.

I have heard about the RPi from various sources online but have yet to take the plunge because of the limited availability of stock. Thankfully, element14 has a branch (or a localized subsidiary) in Malaysia so I got mine yesterday. But, I digress...

What I have is a Windows 7 PC with approximately 2TB worth of... er... downloaded media in various .mkv and .avi files.

What I want to do is to be able to play those files on a HDTV in my living room. While I know that there are much simpler set-ups available, I just thought it'll be a cool project to do over the weekend while I earn my little geek badges.

So yeah, streaming might not be the right word to use, but I just want to watch movies over the network.

My rudimentary knowledge of computing and networking postulates that I can share the HDD on my PC over a network and view those files over the network with my little RPi, and play those files on a shiny new HDTV I plan to install in my living room.

If u want to run Raspbian like me there is a guy who complied XBMC for a quick install.
http://www.memetic.org/pre-compiled-xbmc-for-raspbian/
Quick and easy to use, doh if u need DTS file playback you should look elsewhere

I think I get what you're asking for, you're less concerned about us speculating about the feasibility of such an endeavor, and more interested in the "how do I actually do this?"

First, let me suggest that rather than mounting the hard drive from the PC to the Pi, you get a cheap external drive adapter that looks something like this: 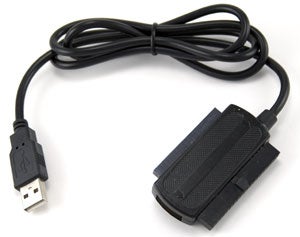 and hook the hard drive directly up to the pi. This isn't because I think the pi will have problems streaming content from another computer, but just thinking it makes more sense to hook it up to the pi and leave it on all the time rather than having to worry about if the power hungry PC is on (or leaving the power hungry PC on all the time!) Then installing and configuring samba to share the hard drive from the pi out to the other PCs.

Okay, now that I've told you how to do something that doesn't answer your question (an oddly common situation when it comes to Linux help

), here's how to do what you actually want to!

First make a directory where you want to mount the drive. Mounting the drive will allow you to actually see the files. For Debian, you'll want to go to the folder called "media" so

now make a folder in this directory where you'll access your drive from. You can name it anything but for my purposes here, we'll just call it ntshare

sudo at the front of a command gives you administrator privileges (well in Linux it's called "root" privileges) At this point, before anything is mounted, I like to give the following command

sudo gives us administrator privileges, chmod changes the security access settings, +r means everyone can read what you're modifying, and ntshare is the folder (or file) you want to change. So taken all together that command makes sure that anyone and everyone can at the very least open the directory you just created. Strictly speaking, it shouldn't be necessary, but I like to explicitly state privileges

Next you actually need to mount the drive. To do this we'll use the "mount" command

There's a lot going on there, but the important parts are you need to change //server's_name/shared_folder to the actual server name and shared folder you're trying to access. Also you need to change myUsername and myPassword to a username and password that have permission to access the folder, if everyone can access it... I guess you can leave off the "-o username=myUsername,password=myPassword" completely? I'm not certain, you'll have to experiment. Finally, you'll want to make sure to replace "ntshare" with the actual name of the folder you created.

I did consider plugging in the hard disk directly to the Pi instead of my PC, but my PC has multiple roles (downloads, gaming, file server, radiator) that I dare not switch it off. On top of that, the files are stored across several SATA HDDs (three at last count) so it isn't very realistic to plug it into the RPi directly.

So, yeah, there is that.

On the other hand, you have just given me a handy tutorial on how to achieve this, so thanks!

sakai4eva wrote:What I have is a Windows 7 PC with approximately 2TB worth of... er... downloaded media in various .mkv and .avi files.

What I want to do is to be able to play those files on a HDTV in my living room. While I know that there are much simpler set-ups available, I just thought it'll be a cool project to do over the weekend while I earn my little geek badges.

So yeah, streaming might not be the right word to use, but I just want to watch movies over the network.

My rudimentary knowledge of computing and networking postulates that I can share the HDD on my PC over a network and view those files over the network with my little RPi, and play those files on a shiny new HDTV I plan to install in my living room.

The CPU in the RPi is fairly weak compared to a multi-core 2 to 3 GHz CPU in a modern PC and it will struggle to decode some compressed video files. The RPi also has a GPU which is quite powerful and with the right software can decode video (even HD) much faster than the CPU. However the only codecs for which that decode software is available are (for licensing cost reasons) H.264 and DivX. Notably missing is MPEG-2. Some people are working hard to get an optimised Standard Definition MPEG-2 decoder which will run fast enough on the RPi's CPU.

So a lot depends on what codec(s) your collection of files was compressed with.
Quis custodiet ipsos custodes?

I have Raspbmc RC3 installed on my pi on a 8GB Kingston class 4 card and I can stream content from my housemates PC upstairs with no problems.

It seems to have trouble with 720p MKV's but other than that, no real issues to report. I'd recommend it to almost anybody wanting a raspberry pi media centre.
Hello!

While it may not seem feasible, I will give it a go.

Now, to get a decent TV working

I have installed XBian on my raspberry Pi, and I have to say that it plays HD 720 or 1080P MKV files (over 5gigabyte files) great through the network, from my desktop computer in another room. Absolutely no stuttering, absolutely smooth.

So much so that I'm going to sell my Mac Mini as this £25 computer does the same job better (it loads straight into XBMC). I have made a video of my exploit: http://www.youtube.com/watch?v=G2-eUrGbl0I demonstrating it's ability to play HD video through the ethernet.

If anyone else is considering this, go do it!!

I've been playing around with both raspbmc and Openelec builds with various results when it comes to streaming both 720 and 1080p hd video. Neither solution will stream without some stuttering. Is xbian really the solution? What is so drastically different in the code that separates it from the other 2?
Post Reply
15 posts • Page 1 of 1