Hello everyone,
I have created a machine vision library in Python which has some promising results on a intel based machine (CPU rendering only). I wanted to test my code on a raspberry pi to see if it's viable for robotics application or if I had to build a custom FPGA accelerator (the processing has to be done in real time, preferably at least 30FPS). Unfortunately I have tried everything but I can't get opencv to install my pi (literally followed dozens of tutorials, reinstalled different versions of raspbian, even tried miniconda to install packages).

The code can be found on github: https://github.com/2332575y/retina
If anyone can test the code on their pi, please let me know so I can send you the benchmark scripts (requires a webcam (the raspberry camera is not an option, has to be via USB)).

Honestly this has taken me so long to try and install opencv, that I have came up with a completely new implementation of the code that should reduce the memory bandwidth problems I had , but I can't test either version to find the bottlenecks on an SOC like the pi. I just want to have a quick check as to whether this is even feasible on a pi or if I should stop wasting time and move on to FPGAs.

Edit:
The required libraries for the codes to work are:
Cython
Numpy
OpenCV
skimage.io
matplotlib

I have "successfully" installed it at least with a few different methods:

but as you can see, every time I actually try to use it, I get an import error.
I have tried pip install, tried downloading the project and running the makefile and pretty much tried all the tutorials you can find on google. I have no idea why it doesn't wanna work for me

Try running everything with python3 rather than python (which gets you python2).
Any language using left-hand whitespace for syntax is ridiculous

DougieLawson wrote: ↑
Fri May 14, 2021 4:49 pm
Try running everything with python3 rather than python (which gets you python2).

I have changed the default interpreter to python3, and even then, as you can see from the picture above, I used pip3 install and tried both python3 and python2, neither of which could find cv2

frankly this is a bit ridiculous how hard it is to install opencv on the pi. On windows it's extremely easy, on linux it's a bit more difficult but still works on my VM, however the pi is just refusing to cooperate ...
Is there an image of raspbian with opencv pre installed? If so I think that'd be my only option at this point.

From https://www.piwheels.org/project/opencv-contrib-python/ does it mean the version you have installed isn't compatible with stretch / buster ?

To be completely honest I have no idea what stretch or buster are; Does it mean I should try to install the 4.4.0.46 version? It's the only "Build successful" I can see from the list.

Why is my python 3.4.3? It's what was there on the pi ... I don't really think it matters that much and upgrading it to 3.10 is probably a good idea, but after having so many issues with such a basic thing like installing a python library, I'm not sure I'm ready to take on upgrading the whole python interpreter ...

Time to get a new 16GB (minimum, 32GB is better) SDCard and install a fresh copy of RaspiOS.

That will get you singing from the same song sheet as the folks who are trying to help you.
Any language using left-hand whitespace for syntax is ridiculous

The current one I'm using was downloaded last week from this link: https://www.raspberrypi.org/software/operating-systems/

Is there a newer version? unless I'm missing, that image comes with python 3.4
Honestly I don't mind reinstalling it again if anyone can link to a tutorial that installs opencv correctly using that image

Edit: Using a 16GB SD card and I made sure to expand the storage on the pi from: sudo raspi-config

I'm confused because the latest version l installed of raspios came with python3.7.3.

Admittedly not the latest opencv but works for me.

I am even more confused: 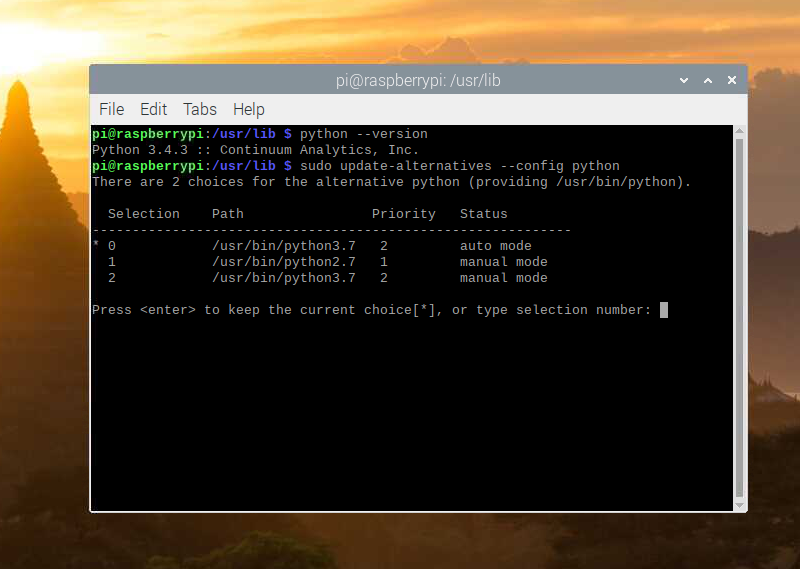 It says that python 3.7 is selected but running python --version says it's actually 3.4 so I have no idea what's going on there

Can you please point me to a guide for a clean install which uses python 3.7? I have pieced this installation together from different information I could find by googling each step but I couldn't find a good walk through that explains each step.

I don't have the answers, maybe when you changed the default interpreter to python3 things got confused.

I'd reinstall raspios and try my suggestion for opencv install and see if that works.

Sorry, slightly off topic, but if one installs cv2 as suggested by Gordon77 "sudo apt install python3-opencv" does that include the "not free" SIFT and SURF methods? For a use example, "detector = cv2.xfeatures2d.SURF_create(100)"

The answer appears to be no.