What makes it all running is the following step:
sudo dpkg -i -B xserver-xorg-input-evdev_1%3a2.10.3-1_armhf.deb

Currently and hitting another problem: Kodi 15.2 touch displacement:
Graphically it is represented here: 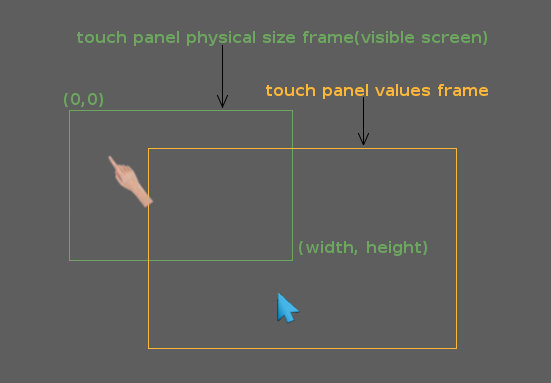 Some ideas? Did someone have Kodi working with this touchscreen?

I followed the steps in the O.P. However there is no touch functionality (i have the Sainsmart 5" touch model with XPT2046 on a RPi3 running Kali).

if using the latest version of raspbian (after march 2017) with raspberry pi 3:
- hold shift at recovery screen
- press e on keyboard to access config
- tab to cmdline.txt
- change root=/dev/mmcblk0p2 to root=/dev/mmcblk0p7
- reboot

I've purchased a 3.5" 480x320 touch screen display (a waveshare clone). Installed using both the waveshare image and installing drivers on a clean Jessie (2017-04-10). In both cases, the display works perfectly, but the touch screen has the same problem.

The display senses the touch, but it is stuck to the edge of the screen. The cursor can sense and follow x-axis (horizontal) movement, but the y-axis is always on one side (bottom, if rotation = 0) of the screen.

Does it look like a hardware or software issue?

Hello, I just installed everything according to the instructions. The display I am using is a Geekcrit 3.5 inch Touch screen. When I reboot the LCD stays white. The display type is :

No version is mentioned. When I run the Calibrator it is shown on my HDMI screen, not on the LCD.

Thanks for your help !

I tried your tip over a simple OCTOPI 0.1.3 distibution, but it's not working.

Maybe because it's not a complete distro.
What do you think?

I have a raspberry pi 3 B with a 32 GB SD card, therefore I am using NOOBS to install Raspbian and I am trying to configure a XPT2046 display, but I have tried a lot of things with no success so far, I always get a white screen in the LCD. I tried new and old instructions, tried Lite and Desktop, I tried installing the driver from waveshare and the OS becomes corrupted. I tried to install the image from waveshare in a 8GB partition in SD card, but it doesn't even boot. Any clue?

pichardo wrote:I have a raspberry pi 3 B with a 32 GB SD card, therefore I am using NOOBS to install Raspbian and I am trying to configure a XPT2046 display, but I have tried a lot of things with no success so far, I always get a white screen in the LCD. I tried new and old instructions, tried Lite and Desktop, I tried installing the driver from waveshare and the OS becomes corrupted. I tried to install the image from waveshare in a 8GB partition in SD card, but it doesn't even boot. Any clue?

I finally was able to make it to work. I had to install a raspbian image from the vendor, it was a little outdated but anyway, I prefer that to nothing. Anything else failed. One more thing, I could not make dd to work to install the image, so I used Etcher. And if I upgrade raspbian, the screen stops working. I hope this helps others.

Hi have you some wiring diagram? I have display connected by cables, and I can't find working solution for touchpanel - display works cool, but touch panel not working.

display working but touch screen I can't came to work.

Okey gus I just about had it.

I bought a Raspberry Pi 3 B two weeks ago and bought with a 5 inch LCD HDMI Touch screen. I did the steps as indicated with the CD I got and afterwards nothing happend. The screen displays perfectly but there is no touch functionality.

I tried all the options here on the Forum and non of them worked. I moved on and found a few other websites like these below:

https://www.hackster.io/dotMorten/windo ... uch-44af19 - Here I actually got a response from the screen but only the left bottom corner. One time I actually had full controll on the touchscreen but then it disappeared again.

I then decided to move on to the evtest and tb-lib ect. There was a change and I could for a brief moment use the touch screen.

I made sure I bought the authentic versions of the touchscreen and the raspberry pi.

Does anyone of you guys have a clue to what can be the problem?

I tried everything and keep getting the white screen. Who have more details about this touch controller?

- the left-right axe is inverted. (I have try lot of calibration config found in this thread)
- I don't know how can I have the xvkb at startup , I can't login graphically

Hi,
Thanks for the extremely clear post on the topic - i followed your instructions but only got a white screen.
This is my LCD screen http://spotpear.com/index.php/spotpear- ... 4-inch-lcd
Is there a way that I could check if the screen is connecting to the Pi?
Also, could it be a a NOOBS issue? I have installed Raspbian Stretch from NOOBS
Many thanks

Hi all,
I had the same issue but this worked straight away for me, touch screen and all.

Subsequent to experiencing a large number of various connections and applying different techniques to my darling LCD XPT2046 3.5", the Raspbian kicked the bucket. The underneath specified life friend in need interface helped me in this emergency. The best part is, we needn't bother with any outsider code to align the show.

Would that work for this screen:

Got it working but the same issue as the center being calibrated but not the edges. Which means I cant really access the main menu icon on the top left which is very useful. The commands I ran were the ones from the original post. I was somehow able to get to it and go to Preferences and Touch Calibration but even after calibration I got the same problem.

So I just ran to the end of the thread and found that I need to run:

and the results are...the same

I still have the messed up touch where calibration is off towards the top of the screen but not so much towards the center and bottom.

I contacted the seller of screen and they told me to install the CD drivers, but i keep thinking to this bit in the OP:

"0) In OS Jessie NO DRIVER REQUIRED! for XPT2046 or ADS7846 Touchscreen. Do not install original driver from Waveshare or any other driver announced as compatible. You will kill your Jessie for sure. At least Waveshare driver totally disables WiFi module functionality!!!"

Has anyone installed the drivers from the manufacturer despite this warning? If so, what were the results?

I have XPT2046 Touch Screen. Should I write

Thank you, everyone who wrote tips before. :) They were helpful. I recently purchased one of the 10.1 inch 1024x600 pixel resistive touch screen displays from Waveshare.

My recipe for making it work was the following:

The screen says it is a 3.5inch RPi 480X320 Display XPT2046.
I have just installed the latest Raspbian Stretch and updated it.
Then I followed your instructions to the letter and rechecked the txt file that needed to be updated and the file that needed to be created.
I ran the other programs you listed and installed the virtual keyboard.
The HDMI screen works great. When I unplug it to see if it boots to the XPT2046, I also just get a white screen.
The back of the xpT2046 just plugs onto the RPi pins.

Any thoughts about what I might be missing?
Thanks.

When I tried the line posted by lucasgsantos in the config.txt file
dtoverlay=piscreen,speed=16000000,rotate=90
the screen goes from white to dark gray, so something is happening, but that is all I get.

I could not figure out what he meant by referring to the settings in /usr/share/X11/xorg.conf.d/99-fbturbo.conf (because you didn't mention it), and his file etc/X11/xorg.conf.d/99-calibration.conf was in a different directory than yours.