Ok, this is my first attempt at using the Raspberry Pi GPIO so perhaps I made a NOOB mistake someone can point out for me?

I decided it would be fun to make a spaceship out of painted wood the kids could go inside and add blinking lights/switches old Star Trek style. I know there is limited GPIO ports on the Raspberry Pi so after a little research I ordered x5 MCP23017-E/SP chips which should control all the LEDs, switches, levers, and POTs.

I decided to test on just one MCP23017-E/SP first before chaining them. My Pi is a v1 with 256MB (got it the first 2 weeks they started selling). I downloaded the latest Rasbian yesterday and in the initial boot raspconfig I enabled SSH and I2C in advanced menu (nothing else was changed). I edited /etc/modules and added:
i2c-bcm2708
i2c-dev

So the chip is not detected? I have gone over all my connections carefully and used a volt meter to check power is going to the MCP23017-E/SP. I have even swapped 23017 chips on the off chance the chip was bad.

I am now at a loss why I cannot see the chip with I2C. Any one with more experience can point me in the right direction or what I might be missing?

Everything you've done sounds okay. Could you post a photo of your set-up?

My old phone does not take great pictures. But here is what I got.

The wires above is just a RGB LED I have not hooked up yet (till the extender is working). If you see a mistake I'd love to know. 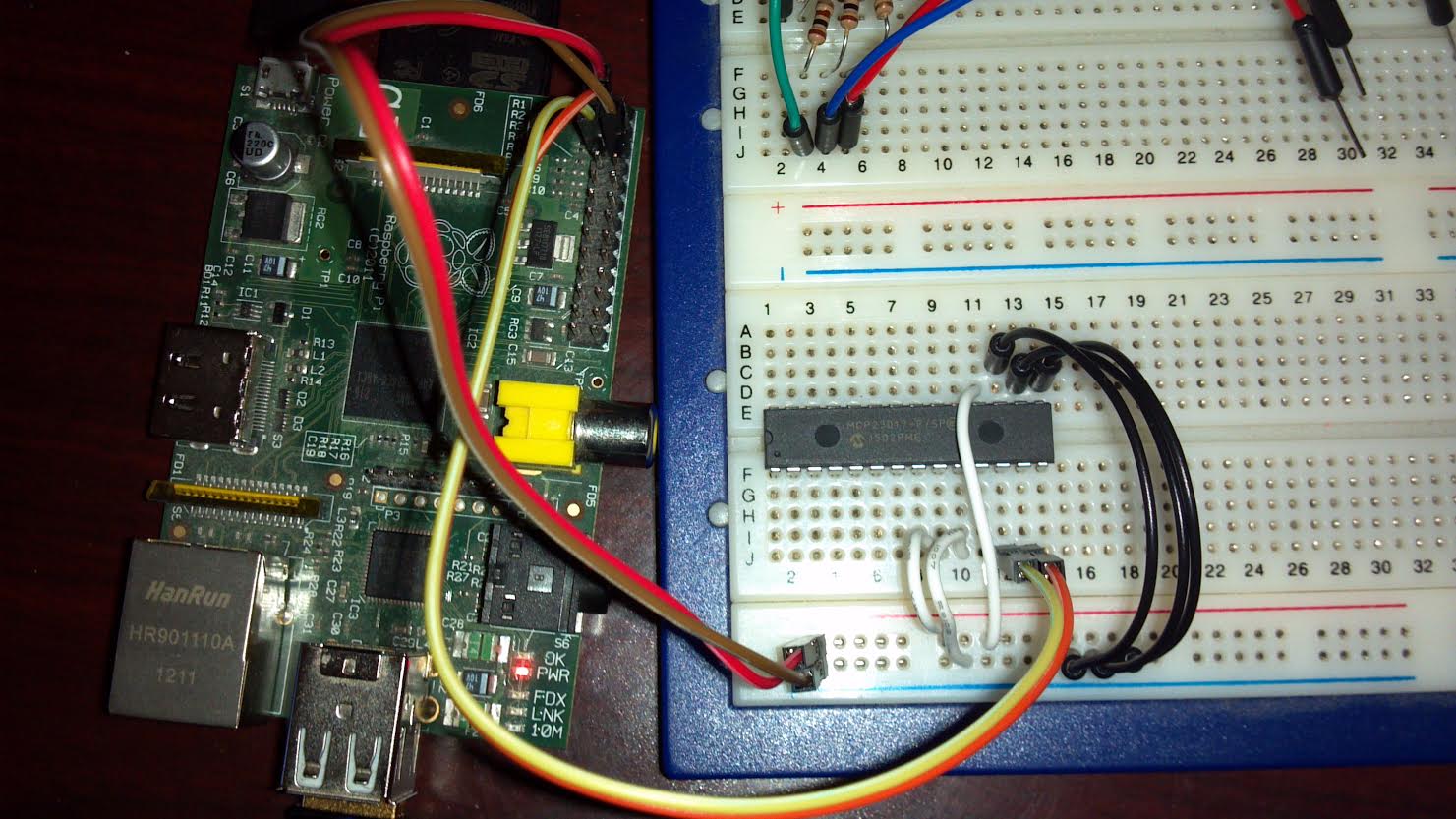 Unfortunately, I can see nothing wrong.

Looks ok to me too.

Perhaps you have a defective MCP23017?

I'd try another one.
http://Mikronauts.com - home of EZasPi, RoboPi, Pi Rtc Dio and Pi Jumper @Mikronauts on Twitter
Advanced Robotics, I/O expansion and prototyping boards for the Raspberry Pi

It won't hurt the Pi since the SDA and SLA are open collector type.

Also you should add a small capacitor between the GND and VDD pin to prevent glitches. ~0.1µF.


And like the last post said used a 1K pull-up resistor to the reset pin. pull-up to 5V if you use 5V.

But if you add pull-up to SLA or SDA keep it at 3.3V. Maybe Try to add 10K pull-up on the I2C bus, SLA and SDA, in case of one of your resistor has been removed.

Ok, thanks for the help so far. Here is where I am with the suggestions. I took a meter and tested all the wires good. I tried using 2 different MCP23017 chips. I then tried using resistors on the reset. I have a variable power supply. So I then disconnected power from the Pi. I tried adding a capacitor (only had a 1.5F 5.5v on hand, overkill but should work) and connected it across Vdd and Vss. I then powered it with 5V DC from the power supply. All provided the same result. Nothing seen at any address.

I'm beginning to wonder if the new kernel has issues with the v1 Raspberry Pi? I could try an older version of Raspbian or try another Pi (I have 2 more of the ver1 Pi but nothing newer). Perhaps in the morning I will try those ideas. Anyone else have any suggestions? It looked pretty straight forward from the tutorials. Hope there is a break. Would love to finish this space ship.

whiteshepherd wrote: ...
I'm beginning to wonder if the new kernel has issues with the v1 Raspberry Pi? I could try an older version of Raspbian or try another Pi (I have 2 more of the ver1 Pi but nothing newer). Perhaps in the morning I will try those ideas. Anyone else have any suggestions? It looked pretty straight forward from the tutorials. Hope there is a break. Would love to finish this space ship.

TBH I've never tried the new(est) kernel/version of Raspbian on my B1 Pi** - most of my "GPIO/I2C/SPI stuff" is running on an updated B+ or A+ and, occasionally on the P2B. FWIW, if you want to download and revert to any older (pre-P2B?) images (or NOOBS installed equivalent) the archives are here:
http://downloads.raspberrypi.org/raspbian/images/
http://downloads.raspberrypi.org/NOOBS/images/
W.r.t. the new kernel, you may find you (still) need to do something that's discussed here:
viewtopic.php?f=28&t=97314
Trev.
** It's mainly used to run the wiki from which I export my "Raspberry Pi Webpages" (see sig.) and thus, rarely updated "If it ain't broke, don't fix it "

I suggest you install wiringPi or my pigpio library. I think some diagnostic tools may be needed (at some stage, even if not now).

I do have an old Pi B rev 1 in spare. It is used for my pond temperature controller in winter.

I installed the newest raspian and followed exactly what you did and the i2c works!
I do not have a mcp23017 on hand but I tried a pcf8574.

If the 5V didn't work , but it back to 3.3V and use a gpio to reset it before doing i2cdetect. Just toggle off and on the reset pin.

Maybe move the I.C. in another place on the breadboard just in case you have a bad contact.

Could you try some other i2c component?

Check you gpio 0 and 1 using python in IN and OUT mode just in case one of the GPIO is damaged.

Try another i2c device, but it sounds like you got a batch of bad chips.