Dear all,
I would like to build an IR remote using LIRC. I connected the IR Led as shown below.

Currently the range max is 2.5m max, I need at least 7m. What do you suggest?

Is there an option to connect multiple IR led in parallel all connected to the BC547? if yes what resistors should I use?

There are lots of options.
Firstly I'd swap to using the 5V pins not 3V3
Reduce 200R to something lower, check the spec of your IR emitter. You can pulse these at much higher currents than always on current. Also make sure the base current is high enough, maybe drop base resistor to 1K or better still..
Swap to using a MOSFET rather than NPN transistor.
Add a reflector to the emitter.

If the forward voltage of the LED is about 1.3v (for ease of calculation) you've allowed 2v across the series resistor, so 10mA through it if the transistor is fully on.

But, with 10k feeding the base (so only 0.25mA into it), the transistor is unlikely to be fully on - its hfe drops drastically towards fully on.

THe GPIO can provide up to 15mA, so you could drop that 10k to less than 1k, driving the transistor harder. That would allow more current through the LED, or equivalently through more LED-200R strings in parallel.

I appreciate all your messages

So the new configuration to try is: In case not sufficient

RGJ-PI wrote: Swap to using a MOSFET rather than NPN transistor.

use a IRLZ44 would be good?

so you are not driving it any near its maximum potential.

so I would try powering the LED from 5V with a 39 ohm resistor as its current limiter , which should give you a current of about 89-90mA at 1.5V 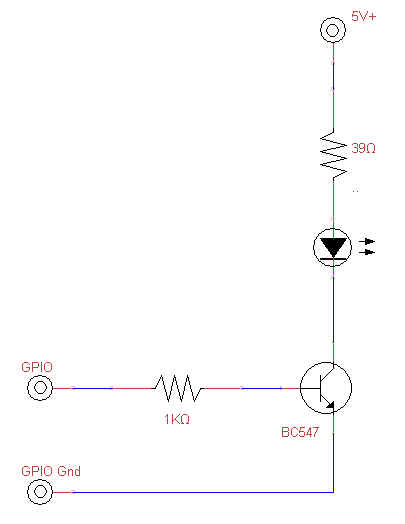 The surge forward current is the parameter of interest in IR remote application rather than always on IR illumination. You can go up to 1.5A pulsed. You'll need a uprated transistor or MOSFET for that.
One other thing, not sure how you are building this but if your circuit is away from the main power source then add something like a 100uF cap across 5V close to your circuit. Minimises the loss and inductance in connecting wires and gives good current pulse capability.

Great advice all of you!

I improved the range: Need to repeat the signal few times to make it work but is an improvement already.
The only other transistor I have is a 2N2222A, would this make any difference?

Actually planning to have the IR led, a bit detached by the circuit 100cm. I need to try it and see if I can move the circuit along in case the idea of the capacitor is good.

Yes changing to the 2N2222 would help if you had smaller value resistors, as you can actually drive the LED at a peak of 200mA, which your existing transistor can't support , If you are only pulsing the LED and not switching it on constantly.

What's this I hear about using MOSFET? Preposterous!!!

That would mean guys like pcmanbob, Burngate, and hundreds of noobs miss out on the fun spending half their life calculating base resistors. And never get to worry about Vsat and other cool vintage stuff. lol

I found with Arduino attaching even cheap chinese IR LEDs directly to AVR pin w/o any current limit at all works best. 3.3v or 5v. The only real drawback is transmission stops if too close to the decoder. Also be careful the pin never gets stuck full on. Of course not possible with Pi due to low drive and fragility.

I have literally dozens of TV remote operated devices around my house and found the decoder part to be a main limiting factor as far as range. Indoors plastic TSOP4838 is capable of 15-20' easy and VS1838, with it's metal cage, about 3x that. Outside after dark up to 100' with a single tx LED. A friend of mine experimented using $3 security camera IR ring and got close to half mile.

A lot has to do with masking ambient light and dark red or almost black filters too.

That would mean guys like pcmanbob, Burngate, and hundreds of noobs miss out on the fun spending half their life calculating base resistors. And never get to worry about Vsat and other cool vintage stuff. lol


Don't worry emma1997 the OP does not have any mosfet's only a 2N2222 or BC547 so is going to have to stay in the past for a bit longer and sample the delights of the NPN transistor.

pcmanbob wrote: ↑
Fri May 01, 2020 4:30 pm
Yes changing to the 2N2222 would help if you had smaller value resistors, as you can actually drive the LED at a peak of 200mA, which your existing transistor can't support , If you are only pulsing the LED and not switching it on constantly.

Have you thought about putting resistors in parallel to get smaller values.

Yes, actually I did afterwards put in parallel 3 resistor to get 40ohm.
so changing with the 2N2222 and lowering the resistor further I could get even longer range... I don't understand how you would than calculate the resistor value needed.

For the MOSFET, but still did not learn how to use it.

So a quick and simple way to get the resistor value for an LED is to use a site like this http://ledcalc.com/

So you enter the supply voltage, volt drop across the LED which is its forward voltage , the required LED current and the number of LEDs 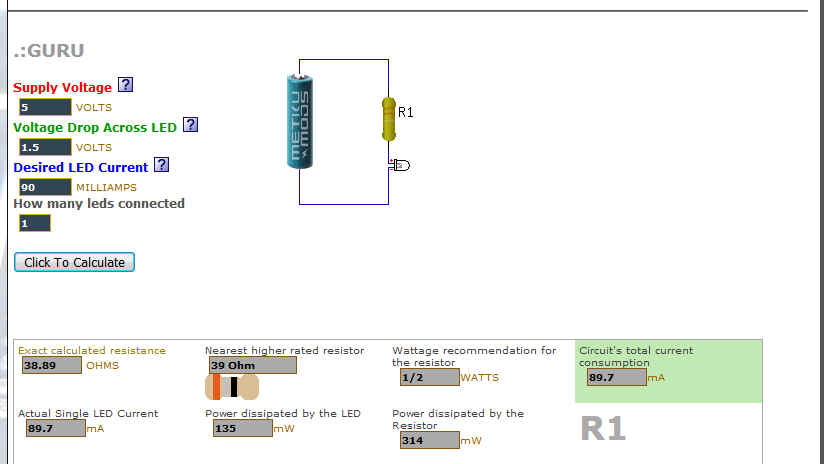 the actual formula is this

So bob, then that is in fact one (maybe only) reason to use a BJT here. I must admit on more than one occasion grabbing a 2n3904 instead of a 2n7000 or other better part just because it was within arms reach. There are also many cases where a MOSFET does not work as good or at all like for current source, bandgap reference, avalanche pulse generator, dual diode, etc etc.

It's like many things that originated half century ago in hobby electronics magazines (remember those?) but still show up in current literature. Old circuits never die, they just keep getting propagated by old timers and picked up by newcomers who don't know any better. Like that great humanitarian and philostopher (apologies Mr Zappa) Bill Gibson said:

"The future is already here—It's just not very evenly distributed."

PS I shouldn't talk being a huge fan of old gear myself. Several tube amps, radios, and other 'valve' equipment. Big collection of obsolete semiconductors. Lots of germanium, even some point contact. Seriously. And don't get me going on 6502 or Z80 (again, lol).

This helps! So based on your numbers if I use a 2N2222 I can reduce the resistor to raise the led current up to 200mA.
To extend the range I could put in serie 2 other IR led with different angular intensity (same peak forward current) and lower even further the resistor, is this correct assumption?

This helps! So based on your numbers if I use a 2N2222 I can reduce the resistor to raise the led current up to 200mA.
To extend the range I could put in serie 2 other IR led with different angular intensity (same peak forward current) and lower even further the resistor, is this correct assumption?

But you could not have the LED on for very long at that power, it would have to be flashing very rapidly.

Understood, I appreciate the answer. Yes actually it's just pulsing a couple of times per day for a limited time. I have found I have another ir led with peak current higher as well i will do some tests. Have a good day
Post Reply
17 posts • Page 1 of 1