by WebPi
My cluster's been up and running for three months now. I've just added four more nodes because I'm starting to get a lot of traffic. My site served 45,000 pages last month and the amount of traffic I'm getting is still increasing. You can read about it here: http://raspberrywebserver.com/raspberry ... uster.html 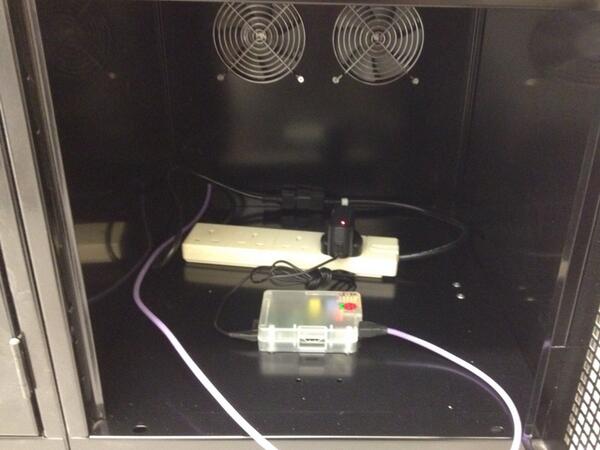 by technix
Headless server - you ain't see it unless accessing it over Internet (http://blog.maxchan.info/)

3.5" LCD for stats with conky and an "UPS" that can power 6 hours if power out, rasp only.

I'm new on this forum and glad to join to the RPi crowd!

I managed to cut SD card for a half size of it, without any damage (as you can see on a photo the memory chip takes only a half of space inside the SD card) so I was able to fit the RPi in small box, also I took down the USB connector on RPi and as you can see I've soldered all the wires directly to PCB the only difference here, is that the HDD power wires I've soldered directly to the power plug on the back panel.

by Richdotward
Mines been running 9 months from a 750gb laptop HD with no issues.

by Diman
I'm using my raspberry pi (128 MB sd card as boot and 8 GB usb stick as root) as a mail server.

As mail server software I use the citadel suite http://citadel.org/. It's a very flexible and lightweight all-in-one mail server.
It took me only 30 minutes to get it completely running. It also has built-in support for spamassassin, clamav and blackhole lists.
I use the built-in webcit webserver to access my mail via a https webinterface.
Off course I have also a SSH server running for remote access.
I use fail2ban to protect my pi against brute force attacks. Fail2ban monitors my SSH server, mail server and my webcit webserver for break in attempts.

I don't use it for any other purposes yet. I don't have any other ideas yet for my pi.

by DigitalFirefly
I just got my Pi for Christmas. So far I've installed:

I'm having issues getting Proftpd working outside of my network. I thought it was just a port issue at first, but I DMZ'd my Pi and I still can't access it out of my network. Haven't had a chance to go back and mess with it yet.

Other stuff I want to install:

Mumble
Some kind of network monitoring tool like Cacti

by txt3rob
dont use FTP use SFTP instead.... less hassle!

2 OpenElec Media Center
...
2.1 next step:
get rid of media center, turn into playground with a couple of dedicated sd cards.
(distributed systems, bare metal, *bsd, whatever)

by kingBakura
I'm running a web and streaming music server with icecast2, mpd/mpc as media player, etc.
URL is in my signature.

by commguy
I have a production use PXE server based on ERPXE that I use to troubleshoot computers. It boots WinPE, several linux live distros as well as installation CDs. I also have some basic windows and dos tools that can be loaded from anywhere.

I just got a new PiTFT from AdaFruit that I'm trying to write an interface for in python. I'd like to add some features but it requires an interface to make them work.

by JAVE
Mucking about on my RPi colocated at PCExtreme (http://raspberrycolocation.com/)
I've got Lighttpd running, with PHP & SQLite
Building a site using WolfCMS

On the shell side of things I use TMux

My server runs lighttpd and vsftpd and I use it to share files over the internet.

My website is http://jameswait.net:443/ (not much on it... and yes, i just modified the default lighttpd page.