Why is the PI2 camera-shy ?

You are in a maze of twisty little passages, all alike.
When General Failure and Major Disaster get together, Private Parts usually suffers.

I could just reproduce this

I'll have to try this.

I've noticed over the years that my Sony k800i is great at killing things. I once took out the PA at an Austrian festival with a single flash photo! It is likely the same mechanism here - and thanks to your detective work, I now know it's not EMP but the actual photons!

I suspect they are silicon dies mounted on the board without a conventional plastic package, it would explain both their appearance and why they are photosensitive.

Wow interesting, I reproed it with a Pi 2 and a Canon Speedlight flash. I put my oscilloscope on the 3.3V power rail and here's what it looks like when you flash the running board: 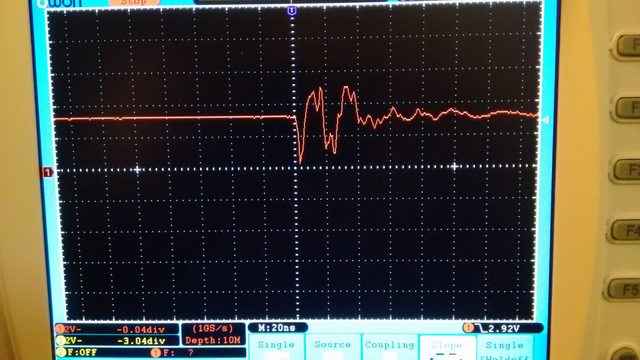 Drops down to almost 0V and wildly fluctuates for about 100ns. Yikes! Interesting that it spikes well above 3.3V (maybe 4.5V or so) too for a very short period.

A laser pointer (even a red one) seems to do it, too.

Another fun measurement, with the board totally unplugged and powered down you get a big spike on the 3.3V line from the flash: 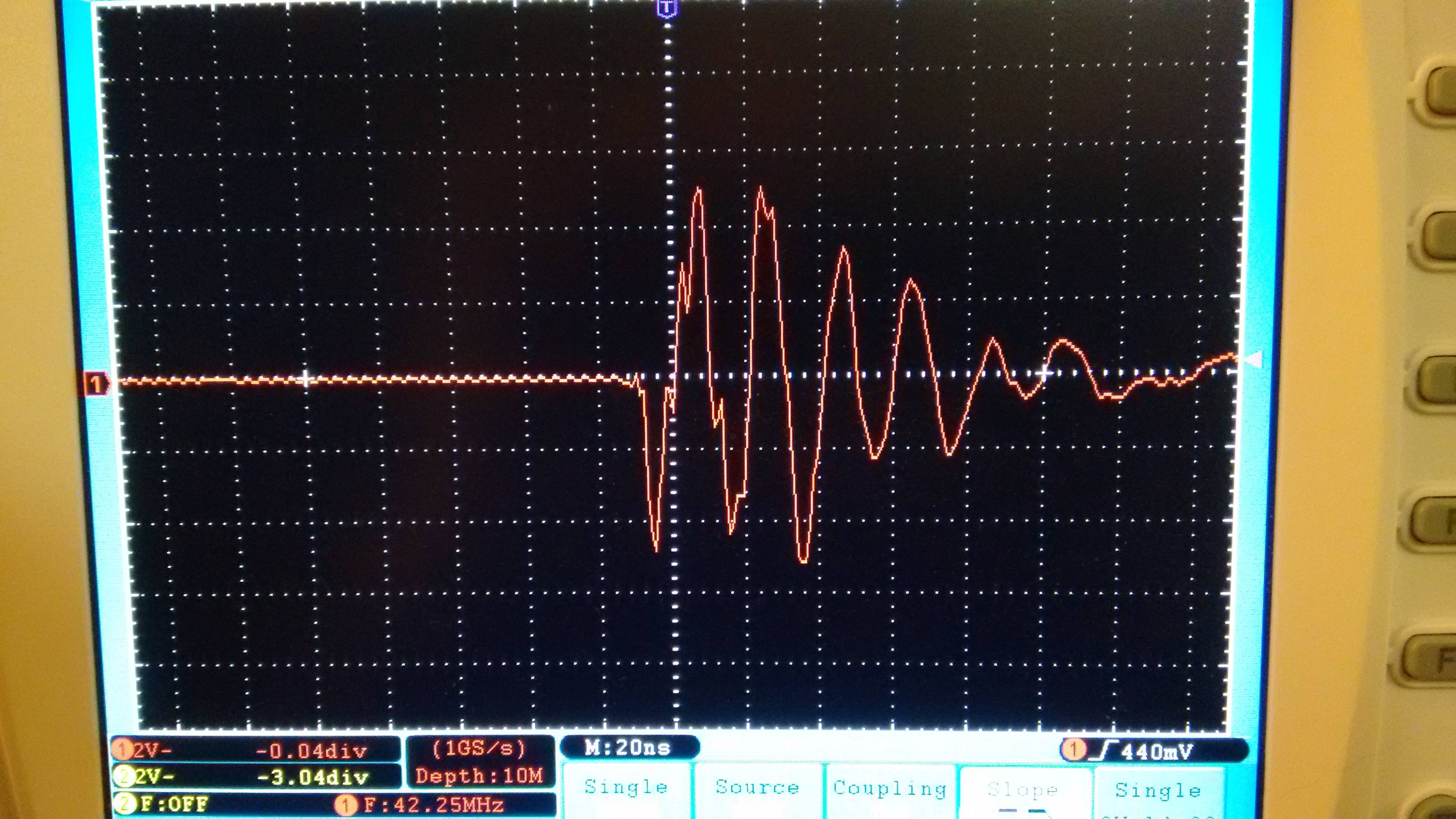 It's a feature not a bug, it teaches you about the photoelectric effect.

Do the "EMC" tests include something that should have caught this?
Is this likely to result in a small change for future RPi2?

tdicola wrote:Another fun measurement, with the board totally unplugged and powered down you get a big spike on the 3.3V line from the flash:

The xenon flash generates a large, fast current spike. It probably isn't what's upsetting the regulator (since it's affected by other light sources) but some if it will be picked up by the oscilloscope probe.

Try setting the flash off with your scope probe tip shorted to the probe earth, with a similar sized length of wire as you used on the Pi (e.g. if you clipped the scope earth close to the 3v3 test point, you can clip it right to the probe. If you clipped the scope earth to somewhere easier, like the USB casings, add a few cm more wire to the loop.

Paul Webster wrote:Do the "EMC" tests include something that should have caught this?
Is this likely to result in a small change for future RPi2?

They include RF susceptibility, which might ensure it won't be affected by the electrical effects of the flash. They don't include anything optical.

I've split off the off-topic posts. They're off in Other Projects in their own thread.

supersat wrote: Back on topic, does anyone know the part number of U16? The Pi 2's schematics don't seem to be available, and the part is way too small to make out its markings.

Paul Webster wrote: Do the "EMC" tests include something that should have caught this?
Is this likely to result in a small change for future RPi2?

So far as I remember, light is too high frequency for the EMC tests to consider. They are all done with antennas in Faraday cages.

I'm in no way involved with any possibility of a fix, but this does seem to have great prank potential so I would hope it gets fixed. I don't see it as a fault as such though, nor something that should have been caught by the designers.

Just wondering if its an LED going short circuit - after all it has a lens to focus the light and they can be used for similar purposes.

Not a led, it's U16 which is part of the power supply circuit.

The U16 chip in question looks different (less shiny) in this pic than mine
https://blog.adafruit.com/wp-content/up ... p_ORIG.jpg

So the problem may be the factory substituting an uncapped chip for the original component
-without plastic top as in that pic
Plastic would be opaque to xenon, so prevent the issue.
Android app - Raspi Card Imager - download and image SD cards - No PC required !

I think it's an On Semiconductor

Another fun measurement, with the board totally unplugged and powered down you get a big spike on the 3.3V line from the flash:

Does Raspberry Pi 2 crashes, freeze or turns off in bright Sun? From what I have read till now a Xenon Flash or Laser Pointer induces glitches causing the board to malfunction. Normally the strong light of the Sun should do the same and possible generate a continuous voltage on that 3.3 V line, not just a short lived sinusoidal signal that quickly attenuates in time.

The IR light emitted by a Remote Control for TV should also be tried to see if it has any effect on Raspberry Pi 2.

It should be also checked if the board is sensitive to Arc Welding.

Quite important, test Raspberry Pi in the street to see if it is sensible to Xenon and other kind of headlamps.
http://en.wikipedia.org/wiki/Headlamp#H ... ht_sources
Last edited by simpex on Sun Feb 08, 2015 11:18 am, edited 4 times in total.

Might be too opaque. Wondering if maybe some nail polish would be enough??

This could be an issue with so many RaspberryPi's being used in exhibitions (digital art & alike).

I expect that most of the pictures of PI2 that will ever be taken were taken last week so this probably wont ever be a problem in real world situations.

PeterO
Discoverer of the PI2 XENON DEATH FLASH!
Interests: C,Python,PIC,Electronics,Ham Radio (G0DZB),1960s British Computers.
"The primary requirement (as we've always seen in your examples) is that the code is readable. " Dougie Lawson

I dub this issue:

It's under investigation. In the meantime, you should assume that the other rules for caring for Mogwais also apply.
Rockets are loud.
https://astro-pi.org

PeterO wrote:I expect that most of the pictures of PI2 that will ever be taken were taken last week so this probably wont ever be a problem in real world situations. 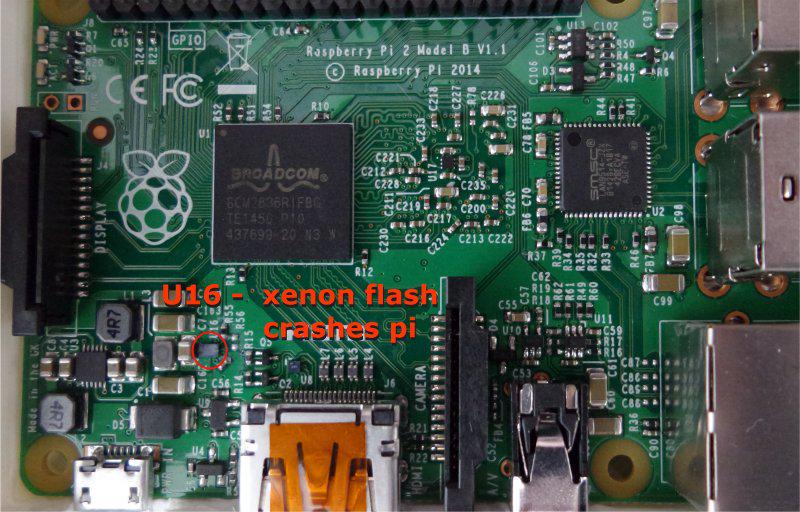 That video is marked "private".
Any language using left-hand whitespace for syntax is ridiculous

does this means i better cancel my PI2 order and order an older model?
i'm not even sure what do you mean by taking a picture of the pi2.