I have an eMMC->micro SD adapter, which allows me to use a 16GB eMMC chip as the storage for Raspberry Pi, via the SD card interface. It worked perfectly on all Raspberry Pi models, and it indeed has much higher speed on 4k writing than any micro SD card I can find. 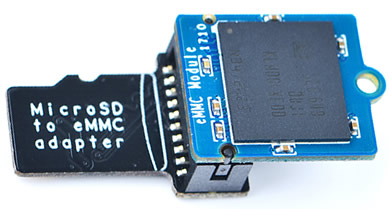 Until today, I tried it on my newly arrived Raspberry Pi 4. it seems totally not detected by the Pi 4 (green LED blinks), just like no SD card inserted.

I am sure it is not due to the EEPROM issue, because I flash the same Raspbian into a micro SD card and it can boot my Pi 4.

Anyone has idea why it doesn't work on Raspberry Pi 4? I searched a lot on the Internet and really can't find anything (considering Pi 4 is just out).

Is there anything I could do to make it work on Raspberry Pi 4?

maybe this could help

I have the corresponding 32 GB eMMC module from Friendly Elec and the same uSD-eMMC passive adapter.
https://www.friendlyarm.com/index.php?r ... uct_id=249

Would it help to write something to the internal eMMC boot partitions to get the module booting on a Raspberry Pi 4 and an original Raspberry Pi?

The performance on the Raspberry Pi 2 Model B Rev 1.1 is very good as expected and much better than on any SD-ard I have seen:

The corresponding numbers for the Raspberry Pi 3 Model B Rev 1.2 are:

Because the (u)SD-reader is upside down on all Raspberry Pis this eMMC-module with the adapter is also upside down and thus a bit inconvenient. The RasPiKey 16 GB module has been designed for the Raspberry Pi so the orientation of the uSD-reader has been taken into account. It would be nice if the RasPiKey eMMC-uSD module would be available in larger sizes than 16 GB. According to them they might do that if there is enough customer demand ...

Both the Friendly Elec SD-eMMC adapter and the RasPiKey are a bit short and wide so they might not fit mechanically if there is too much space between the uSD-reader and the edge of the case where the uSD-card slot is. This small mechanical issue can be worked around by using a SD-extension cable.

In my laptop the eMMC module also gives a reading speed of about 20 MB/s. I guess the eMMC-module could be set into a higher frequency mode if the driver would recognize this possibility. I'm not sure why that does not happen during the module initialization process. The Samsung KLMBG2JETD-B041 eMMC 5.1 chip has a HS400 interface, so natively it can achieve good performance.

The EEPROM version is the latest stable one. I assumed the patch would be included in that one, but I could be wrong of course.

Thanks! Updatting the bootloader EEPROM to the beta release pieeprom-2019-10-16.bin got my Raspberry Pi 4 booting from the 32 GB eMMC-module.

The hdparm result 22.88 MB/s shows that the interface is not running at 50 MHz. It would be very nice if the clock could be increased to 50 MHz for these kind of eMMC-modules to get the full performance of the interface.

I tested the uSD-eMMC adapter with the 32 GB eMMC module in a Raspberry Pi A with 256 MB of RAM and it failed to boot.
The Raspberry Pi B with 512 MB of RAM, revision 000e is the one that I mentioned earlier in this thread wrongly as being of revision 2 that fails to boot.

It would be interesting to hear if others have tested eMMC modules with uSD-eMMC adapters and their experiences.
Post Reply
8 posts • Page 1 of 1