Nope, values in the range of [-16,-1] result in supply voltage of ~1.1V. Positive values (I tried only "1") work as expected. Looks like this config value has changed in RPi4.

Tokyo is reaching 31 degrees Celsius because of its renowned Summer today.
I think of any heat sink and forced air cooler for powerful Raspberry Pi 4

The worst us poor Brits can expect is around 31°C tomorrow.
Unreadable squiggle

It is the newest version of Raspbian. Installed from image 2 days ago, an upgrade produced no meaningful changes.

I've lowered arm_freq_min and core_freq_min so the idling frequencies are lower (without reducing the supply voltage) - strangely, there is no difference to the temperatures, or a very minor one, the system still idles at 67C after the temperature is settled.

Are there any other components worth disabling? GPU perhaps?

My PI4 in the open air idles at about 65, but that is running 4kp60 which does run hotter.
Principal Software Engineer at Raspberry Pi (Trading) Ltd.
Contrary to popular belief, humorous signatures are allowed.
I've been saying "Mucho" to my Spanish friend a lot more lately. It means a lot to him.

Heard coming heat wave to Europe. Tokyo will get around 35 ℃ after the ongoing rainy season will end. Many types of aluminium heat sinks are lined up in Akihabara shops and online.
Making Aloha OS

34C idle after idling overnight with heatsink/undervolted fan in Pibow case. Ambient 20C. With heatsink but fan turned off after sustained full load I got it to actually start throttling, turn on fan and within a minute whilst still at full load the temperature had dropped 20C. I never realised how well fans work in combination with a heatsink.

I saw a 20C drop, just with the FanShim fitted, no heatsink. The USB ports were noticeably cooler as well after 10 mins of the fan running.

I then decided to install a small computer fan I still had (in my case a Konig CS40MMFAN, size 40x40x10 mm). The fan fits nicely in the RPI housing. A 35 mm hole in the top of the housing allows for good air flow:

The fan requires 12V for full speed operation, but at a lower voltage the speed is reduced and so is noise (which is nice). At 9.5 Volt my fan is extremely quiet and cooling is still good. These are my results within a 5 minute time window between open case (still better than a closed case) and case closed with fan running:

The RPI only provides 5V (on pin 4+6 of the GPIO connector), so I used a small DC-DC step up circuit to turn 5V into 9.5V and glued that to the side of the fan. See:

The DC-DC step up circuit I used had a fixed voltage output and I modified one of the resistors to change the output to the right voltage ( I did already had this step up waiting to be used in a project). It would be better to order a step up circuit with adjustable output voltage (price around $1,50 at Aliexpress), but for now this is good enough.The yellow wire of the fan is not connected, but it could be used to connect to one of the GPIO pins to tell the CPU how fast the fan is running. This would however require some additional resister circuit as the tach signal from the fan is 12V and the GPIO pins require the voltage to be below 3.3V... A project for another day.

I'm getting 60 degree temperatures on idle too. This is a clean bluster install with HDMI boost disabled:

I'm using the Coupé case with passive heat sink and have the WD PiDrive connected to the USB.

Somewhat disappointing, guess I'm going to have to buy a cooling fan.

55C on idle goes to 64 when watching Pi4 videos on youtube,
But I have a 20 x 20 x 5mm heatsink on it, a puff of air on it brings it down to 55 again.
I'm dancing on Rainbows.
Raspberries are not Apples or Oranges

Or you need new firmware for the USB Controller.
“some thermal optimizations that are not installed by default on early production units.”

And lspci is showing

As it seems ASPM (Active-State Power Management) is not enabled on older batches.

According to this post, new firmware will lower temperature a few degrees.
https://www.cnx-software.com/2019/06/29 ... mperature/

I'd like to test this firmware update. Is it available somewhere publicly?

Likewise... presumably there will be some way to update an existing installation?

I'd also be fine to be a guinea pig if Raspberry Pi developers want some people to test this advance. I can provide feedback and data.

AFAIK the firmware is not available yet.

The RPi3 case you could remove the top and the two side panels. In total there were 5 plastic parts.
The RPi4 case consists only of 2 plastic parts. It is a fully closed system. So given the case ventilation wasn't part of its design.

I've been eyeing for another SBC since I got my RPi3. When I heard RPi4 was released I immediately jumped in. I should have waited for the reviews and based my buying decision on that. The RPi4 case is worthless for me since I need a case that supports active cooling in order to run it without being throttled.
Also based on what I've read I'm not sure what's the supposed idle temperature is. There are people who have a much, much lower idle temperature.

I opened a new thread about the different firmware shipped (and related thermal and performance issues).
https://www.raspberrypi.org/forums/view ... 3&t=244092

4Gb Pi4 with official PSU and an external (mechanical) USB HDD with Raspbian installed on it (but booting from SD).

After ~15 mins idling in desktop, temperature is drifting between 58 - 60C with an ambient of 24C and no fan 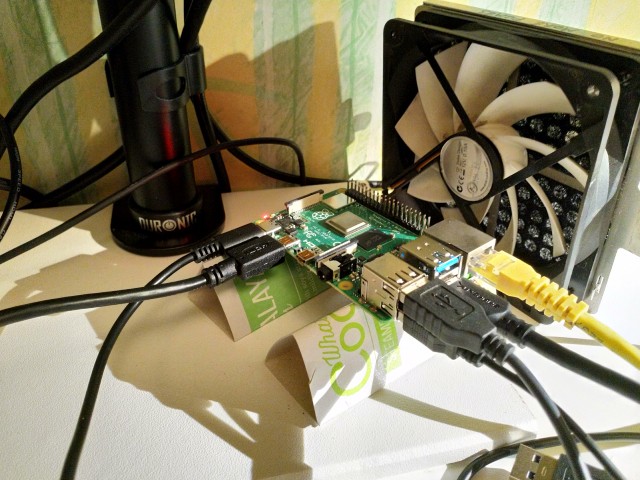 The Pi is installed on an official Raspberry Pi Cooling Trestle

With the fan in the picture running (which doesn't move as much air as it's size suggests) the idle temperature hovers around 41 - 43C, ambient at 24C

Without the external cooling, a single busy web page in Chromium can cause the temperature to rise quickly to 80C and throttling to occur.

I removed a small heat sink from an older Pi. Removed the thermal tape (non sticky at that point). Cleaned the heat sink with GooGone. Applied a tiny dab of arctic silver to the SoC. Firmly pressed the heat sink on. My idle temp is now 44-47C down from the high 60's.

All devices off the production line that have gone to customers are the same, and all have had the same firmware installed. There is no such thing as an early production unit that went to customers, they are all the same. Reviewers and beta testers had early production devices, as you might expect. These were updated in the field as necessary.

The firmware update to the USB chip has not been released, it is still under test. It has been used in house, and I think distributed to our external testers mid way through last week. So hopefully released fairly soon. I've not noticed any regressions with it, but only have keyboard and mouse attached.
Principal Software Engineer at Raspberry Pi (Trading) Ltd.
Contrary to popular belief, humorous signatures are allowed.
I've been saying "Mucho" to my Spanish friend a lot more lately. It means a lot to him.

Thank you for the info. This would be consistent with what I am seeing - lowering idle cpu frequencies has almost no impact on power consumption but changing (increasing) supply voltage increases power consumption dramatically.

I will wait for the updated vli firmware, any eta would be greatly appreciated.

Anu idea why supply voltage cannot be lowered in RPi4?

If you mean "over_voltage=-2"
That seems to be working now.
Post Reply
589 posts