I am experiencing an issue where my Raspberry Pi 3 is no longer able to boot. The image runs apache, WordPress, NextCloud, and an email server. Everything was working fine for around a month and a half and then today I received a Jetpack report saying the WordPress site was down. Going to the website resulted in a blank page - however, NextCloud and the email server still worked without any problems. Logging in via SSH gave the message *** stack smashing detected ***, so I restarted the pi. However, on booting I now receive the following error message: 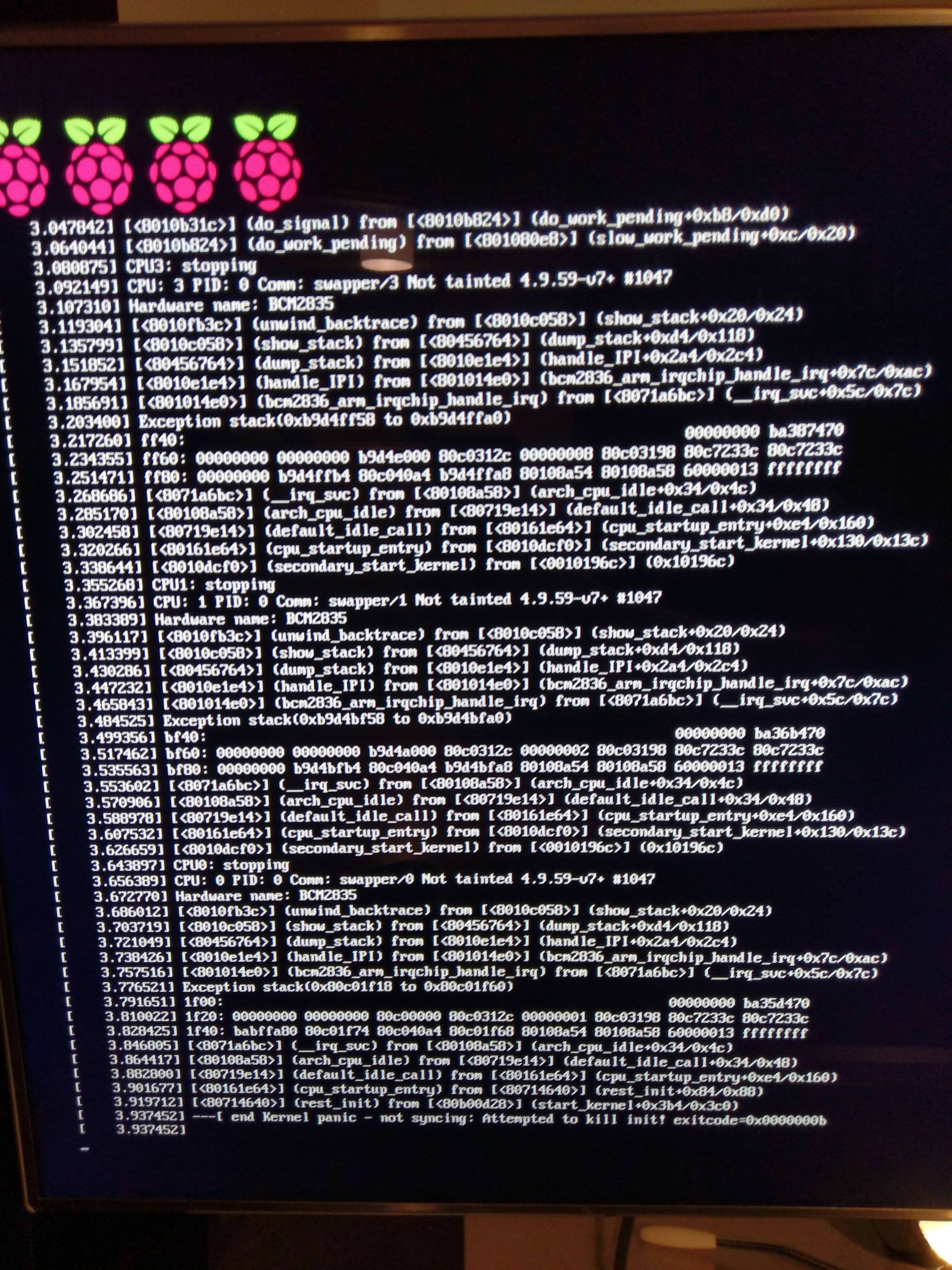 Tried the sd card on a Raspberry Pi 2 and receive the same output. Unfortunately the text scrolls too fast to read what precedes it and it looks like it is not possible to scroll back up via the keyboard - the power light on it doesn't even turn on anymore.

- the power light on it doesn't even turn on anymore.

Apologies by power light I was referring to the green LED on my USB keyboard that lights up when it has power. The raspberry pi's red light still works. Both the pi's that fail with the above error work perfectly fine using other SD cards. Ideally though I would like to fix the boot on this SD card rather than having to start from scratch and set everything up again.

The SD card may be corrupt, try mounting the linux partition from an external sd card reader - it may have reached the end of its useful life.
You are in a maze of twisty little passages, all alike.
When General Failure and Major Disaster get together, Private Parts usually suffers.

Googling the term stack smashing on arch Linux gave lots of results https://www.google.co.uk/search?q=stack ... istgfUt5Io
but one that stood out https://en.wikipedia.org/wiki/Buffer_ov ... protection because of this line

"Stack buffer overflow can be caused deliberately as part of an attack known as stack smashing. "

because you said you were running apache, WordPress, and you said "I received a Jetpack report saying the WordPress site was down", is it possible that some one has tried to hack your pi and caused your system to be come corrupted ?

Thanks for the replies. SD card mounts fine on Linux. However, I wouldn't be surprised if system was corrupted due to attempted attack. There were a lot of suspicious visits to the site. When I first set it up nearly three years ago it slowed down massively. After installing WordFence it turned out a couple of Russia IPs were repeatedly hitting the site, so blocking them fixed that. Since then though there are at least 10 IPs a week, can be over 100 at times, that get auto added to the ban list. Experienced a lot of problems hosting the site on a Pi, with it regularly crashing when using nginx (so always ended up going back to Apache) and a SD card burn out once a year roughly. Caved in and bought shared web hosting as the additional cost will be easily recuperated in time regained dealing with these issues. My other Pis that I use (running things such as: music server, taskwarrior, contacts and calendar, kodi, security camera, etc) never have anywhere near the same problems - and only had one SD card burn out between them.
Post Reply
6 posts • Page 1 of 1