Any idea if this is an actual product that is intended to be launched? It seems to be a M.2 socket based RP2040 that is currently attached to a Piunora in the photo.


As a side note, one of the photos shows a Raspberry Pi RP2040 board that slots into the M.2 socket, but no details are provided at this time. 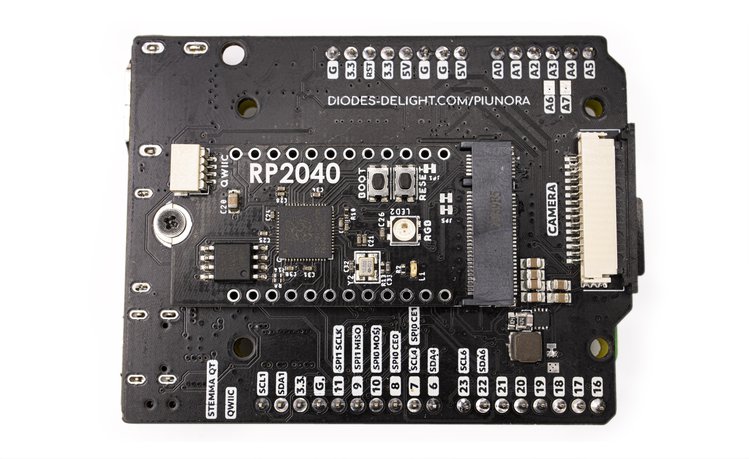 
Timonsku created a proof-of-concept RP2040 M.2 Add-On Card that's compliant with M.2 B-Key and has access to the USB signals.

"This is mostly a demonstration that it is easy to make your own M.2 compliant addon cards."

So I would presume that's a, "no", not an actual product intended to be launched.


If there is interest then apparently, "yes." So if it's wanted, interest needs to be shown! https://twitter.com/timonsku/status/1377220214346113027
Technical Documentation Manager
Raspberry Pi (Trading) Limited
About me, http://alasdairallan.com

SparkFun (Colorado USA) has a line of products they call MicroMod. Several different processor boards and several carrier boards. It works with their Qwiic (3v3 I2C) system. Adafruit uses the same connector and pin out as Qwiic but calls it something else.

Dale
in Stump Town in the Beaver State in the PNW

Just to clarify, their MicroMod IS NOT pin compatible with an Arduino MEGA 2560 style board or any Arduino Shields either. Looks similar but is very much not so. Arduino shields DO NOT physically fit.

Adafruit calls their version of the QWIIC connector Stemma QT. SparkFun names things that Adafruit uses call Feather as, well, Feather. Not sure what any of that has to do with this M.2 based RP2040 unit? Would like to see it have a QWIIC or Stemma QT (just a third party JST connector anyway) ideally at least.

SparkFun has several carrier boards not just the 'All the pins'. I have never seen that the ATP board was said to be Arduino shield compatible. They have one dedicated to data logging and 2 the just hold the processor board and a Qwiic 1x1 board. All the carrier boards that I have have a Qwiic connector. From what I can figure out the MicroMod carrier boards are intended to work with the Qwiic boards in a way that you can add or remove sensors, input and output boards with little time spent. No dedicated shields and small size. There is also a Qwiic to Grove cable. If you really need Arduino Shield compatibility SparkFun sells the M 2 connector and has info on making your own board.

Adafruit uses the same connector and pin out as Qwiic but calls it something else.

They technically differ slightly as well. Probably less relevant now as the move to 3.3V seems to be fairly widespread but it's at least worth noting.

STEMMA QT is 3-5V DC and QWIIC is only 3V DC for both power and logic pins.

Both are I2C only.


I have never seen that the ATP board was said to be Arduino shield compatible.

It specifically says it is not (look at the bottom of https://www.sparkfun.com/products/16885) but only when a user made a comment about it on their specific product page. They certainly do not go out of their way to clarify this in the sales literature! It LOOKS as if it is Arduino Shield compatible but clearly is not as you cannot even plug a shield in.

I conceptually like the idea of their process here of having a specific MicroMod M.2 method of changing out or upgrading or replacing chips used but it is also somewhat proprietary as well and the documentation has been less than ideal to easily determine what one could use and exactly how to use it in terms of pins and specific support. You basically have to map it out but the map they provide is surprisingly not very helpful or quick to use.

Even worse with the RP2040 ATP version right now because none of the drivers seem to work with it. You can even change and map the pins yourself but it doesn't easily handle that nor does it handle any of the traditional Arduino IDE support for the RP2040 yet either (some of that is reliant on Arduino adding that support, not SparkFun but even adding their hardware or software product support is something they could be working on much more than they are doing currently).

Already been months since it was released and they definitely focused on the MicroMod one first in terms of stock (although out of stock right now). Either because nobody bought them as often or because they made so many.

PossibleRP2040 wrote: ↑
Thu Apr 15, 2021 12:42 pm
They certainly do not go out of their way to clarify this in the sales literature! It LOOKS as if it is Arduino Shield compatible but clearly is not as you cannot even plug a shield in.

And that's not helped by its inclusion in the "Arduino Boards" section of their site, though what "Arduino" actually means or specifies can be debated.

Home / Product Categories / Arduino Boards / SparkFun MicroMod ATP Carrier Board
Click on Arduino Boards and it takes you to https://www.sparkfun.com/categories/242