I'm having a go at designing a Pi Hat for the Pi Pico as an easy way to hook it up for programming/debugging (mainly as an exercise in learning more about PCB design/fab).

In the PDF guides, it mentions that PI 5V and Pico VSYS should be connected via a diode, and ideally a Schotky diode. Is there any specifics specs to look at for this diode, or will any schotky diode work?

This is what I have so far. Not much, just added some headers, the EEPROM circuit from the hats github, and some links.

Would anyone recommend any tweaks/changes to the pi/pico wiring? Any extra protection necessary, or would it be OK as is?

I'll probably add a pair of headers alongside the pico headers so you can plug things in while it's in place. May also add some on-board bits and bobs for testing. A few RGB leds and such.

I don't think it matters much about the diode given the wide operating range. I'd be tempted to leave it out unless you are planning to allow the Pico USB socket to be used, in which case a diode is necessary to prevent back-feeding.

Don't forget to add a RUN / Reset push button or you won't be able to enter BOOTSEL mode without power-cycling the Pi !

Inline resistors on the two UART lines would be recommended, just in case something goes wrong and you end up with two outputs connected together.

I would also recommend looking at the Pico Demo Board / Hardware Design PDF to see how they allocate I/O pins - Pin 1 and 2 isn't a good choice for UART if you want to try VGA.

In fact, I'd say replicate the Demo Board even if it's just to header pins. That way you can use demo code for that unaltered -- And note for VGA you don't need to include a full resistor DAC per channel if you can accept 8-colour RGB, one resistor per RGB should do it. The unused lines could go to your RGB LED's; it won't matter if they flicker like crazy doing VGA.

You might even have a "Pico on a HAT" product at the end of it.

How's this for a start? 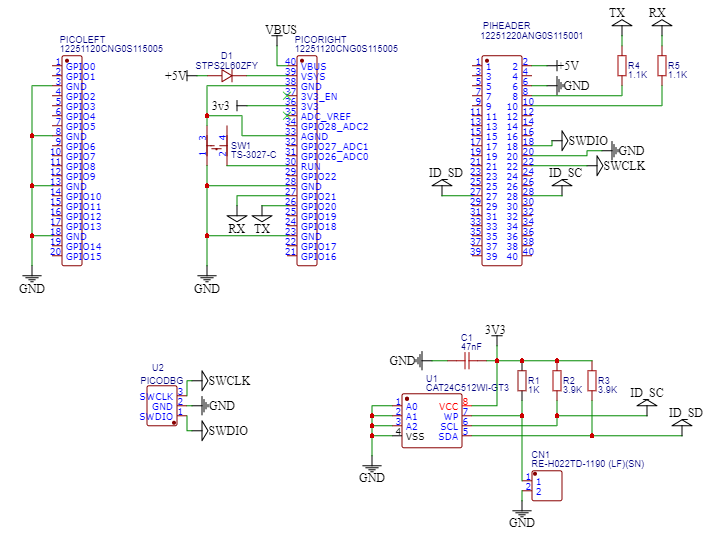 Any particular value the inline resistors should be, or just something? I added the RUN button as suggested, and moved the UART to be inline with the demo board.

I'll be breaking all the pins out anyway to headers parallel to where the pico is plugged in. Will see about VGA etc. I was aiming for one or two basic peripherals just as a "hello world" (thus the RGB led, WS2812 probably), then using the header breakouts for anything more. Maybe I'll fire off an order for 5 basic boards from JLCPCB first, and if it all works, I might see then about a more featureful board. It'll be open source of course

Looks good to me and I would expect 1K1 resistors to be fine for the serial.

That 3V3 from the Pico should be NC / header pin. The HAT Eeprom 3V3 should come from the Pi. Don't short the two together.

That 3V3 from the Pico should be NC / header pin. The HAT Eeprom 3V3 should come from the Pi. Don't short the two together. 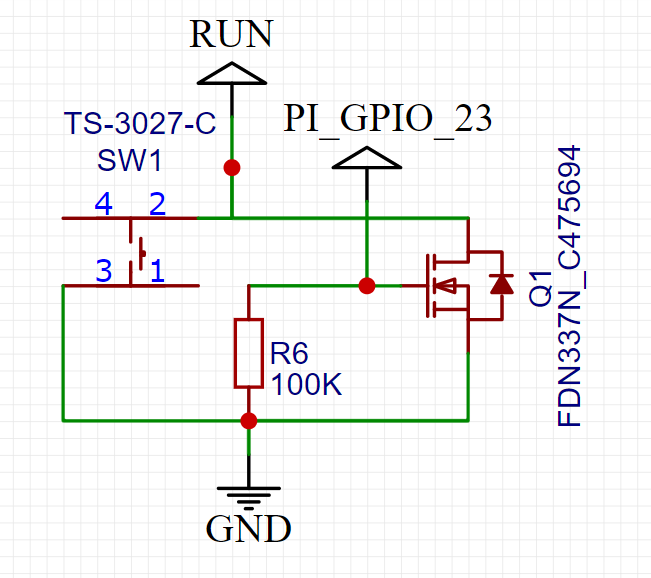 Would this work for the RUN switch? A pushbutton, along with the ability to trigger it from GPIO23 on the Pi through a MOSFET? Is that a reasonable approach, or is there a simpler way to bridge RUN to ground from a Pi GPIO?

That particular MOSFET was found linked in this forum as one that works at Pi voltages.

Are you sure the diode is required if there are not dual sources?

If it doesn't hurt to have it there, I figure why not leave it there. I'll be breaking out all the pins, I don't doubt at all that I'll be an idiot at some point and wire up 5v without thinking. So having the protection there could save those potential errors.
Post Reply
8 posts • Page 1 of 1