Doctor Who fans are enjoying a richly layered Series 9 so far this autumn, with plenty of nods to classic Who and a fabulously creepy two-parter that concluded on Saturday. I resisted the temptation to share Richard Hopkins‘ amazing K-9 build blog here when I found it a while ago, because I thought it’d be best appreciated alongside the superb screen presence of Peter Capaldi’s Twelfth Doctor to remind us what a wonderful fictional universe this is (not everyone agrees with me about Capaldi, of course; note, though, that I’ll be moderating the comments scrupulously). While some projects might occupy a few entries on their author’s more general blog, it’s easy to appreciate that the scope of this project, which has been ongoing since May 2014, warrants a blog all to itself. A Raspberry Pi as the brains of the robot was part of the project from the very beginning. It controls K-9’s expressive, servo-driven ears and tail as well as the scooter motors that move him around, runs Node-RED to allow browser-based control and to display a power monitoring dashboard on the panel on his side, and lets him to respond to voice commands and hold a basic conversation. A Raspberry Pi camera module on a long cable sits behind his eye panel. Who wouldn’t want to share their home with a robot like this?

The addition of a wagging tail, side monitor dashboard and eye camera is significant progress.

As fantastic as Richard’s build is, it’s not the only homemade, Raspberry Pi-powered K-9. William Reichardt’s wooden-bodied K-9 is tricked out with a thermal printer in its head; and if, like me, you don’t have the time or the technical chops for a project this complex, you can still house your Raspberry Pi in a fine LEGO K-9 case.

Meanwhile, if the current series of Doctor Who has seen the Doctor swap his sonic screwdriver for a pair of sonic sunglasses (they look great, but we’re hoping they’re not forever, yes?), fans seem committed to the classic tool. I found four different Raspberry Pi-powered sonic screwdrivers for everything from door locking to a TV-B-Gone, after which I stopped counting. 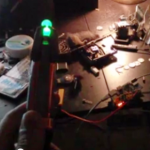 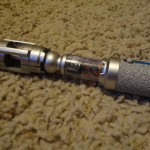 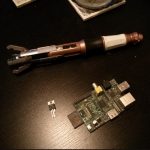 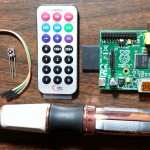 Sonic screwdriver, by someone at volcano.newts.org

Alan O’Donohoe has made a Raspberry Pi-controlled Dalek that responds to Twitter, a Doctor Who story premise that I never want Stephen Moffat to consider.

At our Preston Geek Up meet: A 12″ model of a Dr Who Dalek is controlled by tweets, received by a battery powered Raspberry Pi computer running Linux The RGB LED responds to colours tweeted with hashtag #cheerlights Dalek robot developed by Alan O’Donohoe, @teknoteacher

Last of all, something we can’t leave out of any conversation about Doctor Who-related Raspberry Pi projects is Dave Akerman‘s TARDIS. Slightly smaller on the inside

OK, so it’s hard to call this a fully working prop; it’s pretty small on the outside to begin with, and then the inside is, if anything, a little bit smaller. However, with the help of a high altitude balloon, it did fly to the edge of space, which counts for a lot with us. This might seem like the kind of thing for which you need long experience, and it’s true that a HAB flight demands some months of preparation. But having seen our first few successful launches following this summer’s Skycademy training for educators, we know that a stratospheric TARDIS is something that’s within the reach of primary schools.