Beating the contestants at Countdown: is it cheating if you happen to know every word in the English dictionary?

Allow your robots to join in the fun this Christmas with a round of Channel 4’s Countdown. https://www.rosietheredrobot.com/2017/12/tea-minus-30.html

First, a little bit of backstory. Challenged by his eldest daughter to build a robot, technology-loving Alan got to work building Rosie.

I became (unusually) determined. I wanted to show her what can be done… and the how can be learnt later. After all, there is nothing more exciting and encouraging than seeing technology come alive. Move. Groove. Quite literally.

Originally, Rosie had a Raspberry Pi 3 brain controlling ultrasonic sensors and motors via Python. From there, she has evolved into something much grander, and Alan has documented her upgrades on the Rosie the Red Robot blog. Using GPS trackers and a Raspberry Pi camera module, she became Rosie Patrol, a rolling, walking, interactive bot; then, with further upgrades, the Tea Minus 30 project came to be. Which brings us back to Countdown.

In case it hasn’t been a big part of your life up until now, Countdown is one of the longest running televisions shows in history, and occupies a special place in British culture. Contestants take turns to fill a board with nine randomly selected vowels and consonants, before battling the Countdown clock to find the longest word they can in the space of 30 seconds.

I’ve had quite a few requests to show just the Countdown clock for use in school activities/own games etc., so here it is! Enjoy! It’s a brand new version too, using the 2010 Office package.

There’s a numbers round involving arithmetic, too – but for now, we’re going to focus on letters and words, because that’s where Rosie’s skills shine.

Using an online resource, Alan created a dataset of the ten thousand most common English words. 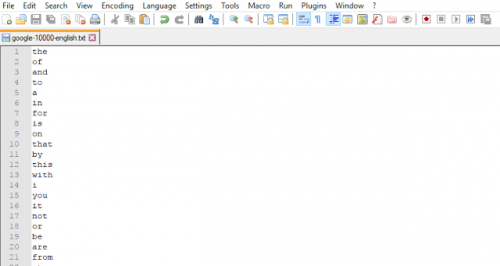 Many words, listed in order of common-ness. Alan wrote a Python script to order them alphabetically and by length

Next, Alan wrote a Python script to select nine letters at random, then search the word list to find all the words that could be spelled using only these letters. He used the randint function to select letters from a pre-loaded alphabet, and introduced a requirement to include at least two vowels among the nine letters.

Words that match the available letters are displayed on the screen.

Putting it all together

With the basic game-play working, it was time to bring the project to life. For this, Alan used Rosie’s camera module, along with optical character recognition (OCR) and text-to-speech capabilities. 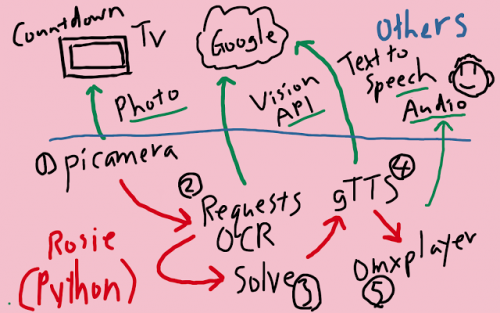 Alan writes, “Here’s a very amateurish drawing to brainstorm our idea. Let’s call it a design as it makes it sound like we know what we’re doing.”

Alan’s script has Rosie take a photo of the TV screen during the Countdown letters round, then perform OCR using the Google Cloud Vision API to detect the nine letters contestants have to work with. Next, Rosie runs Alan’s code to check the letters against the ten-thousand-word dataset, converts text to speech with Python gTTS, and finally speaks her highest-scoring word via omxplayer.

You can follow the adventures of Rosie the Red Robot on her blog, or follow her on Twitter. And if you’d like to build your own Rosie, Alan has provided code and tutorials for his projects too. Thanks, Alan! 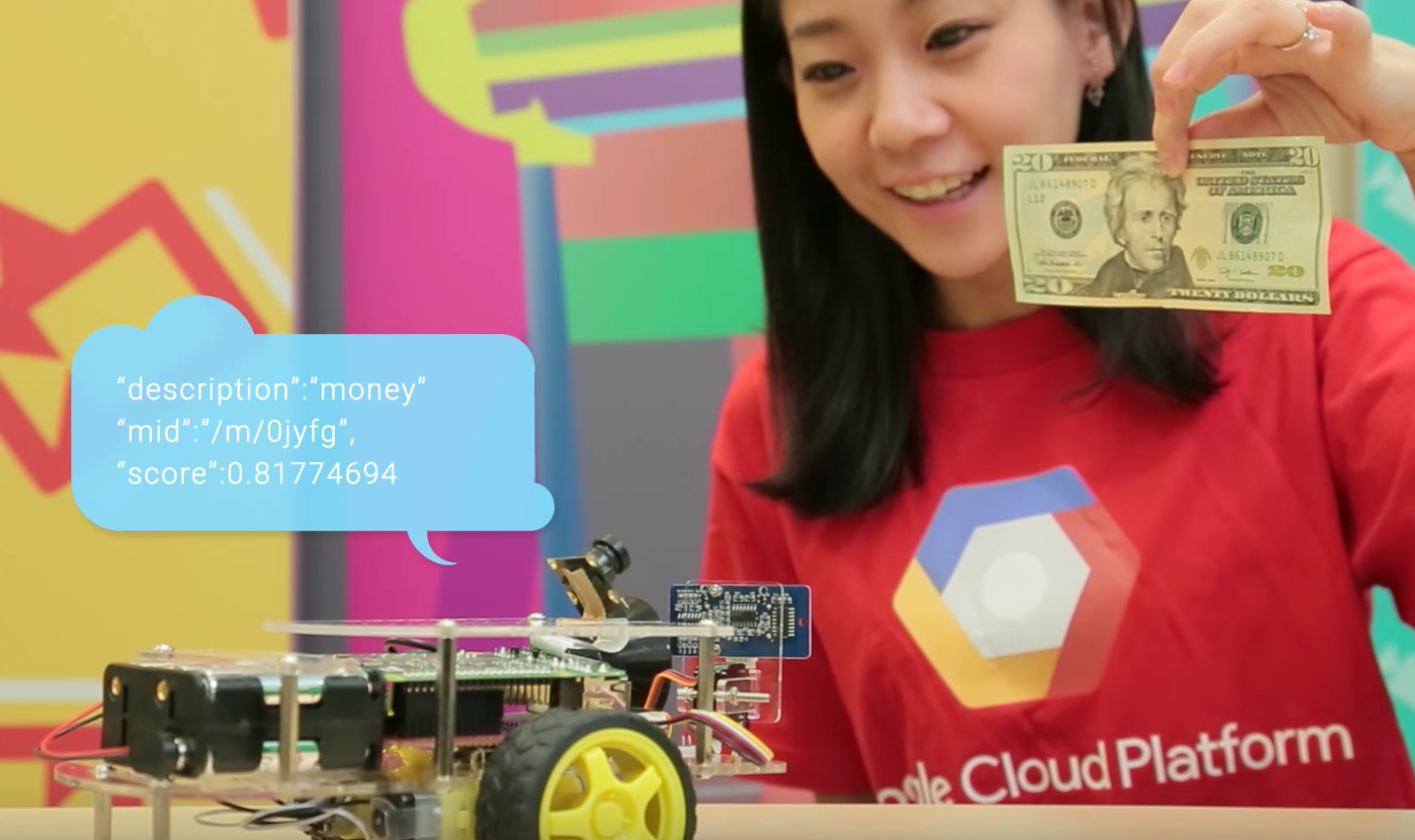 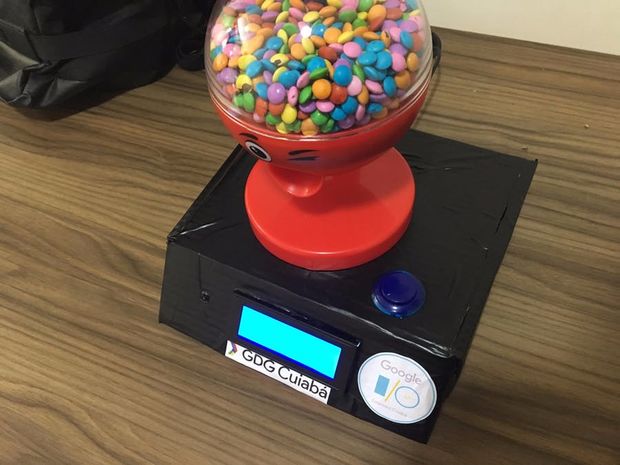 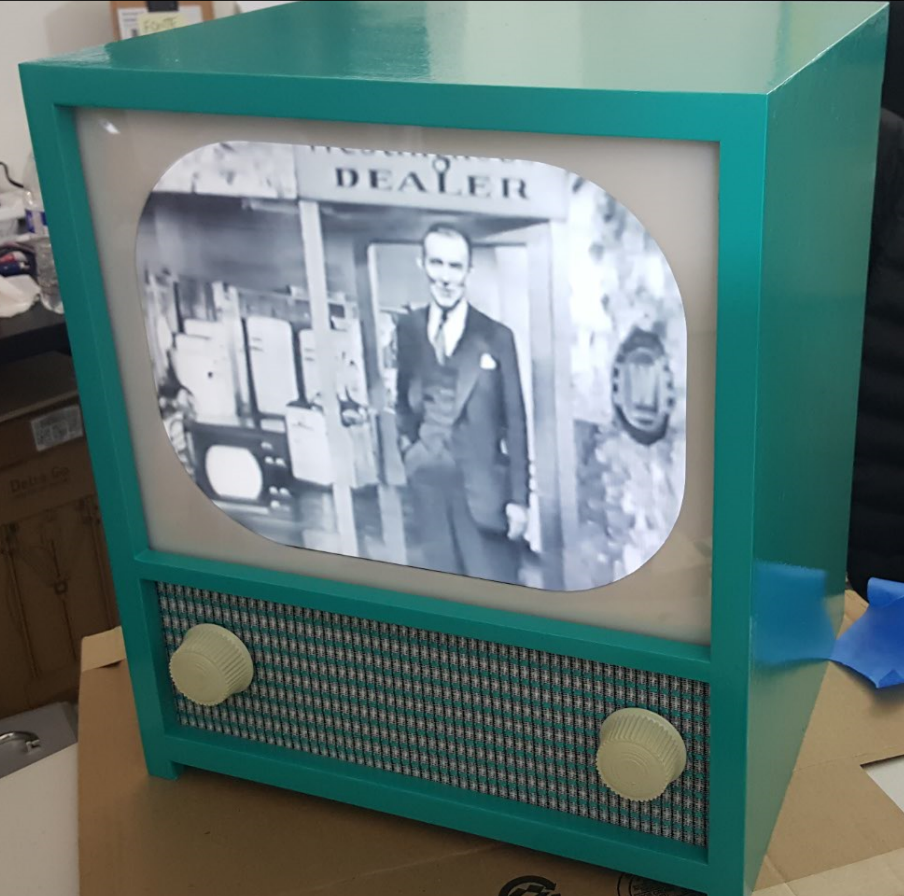 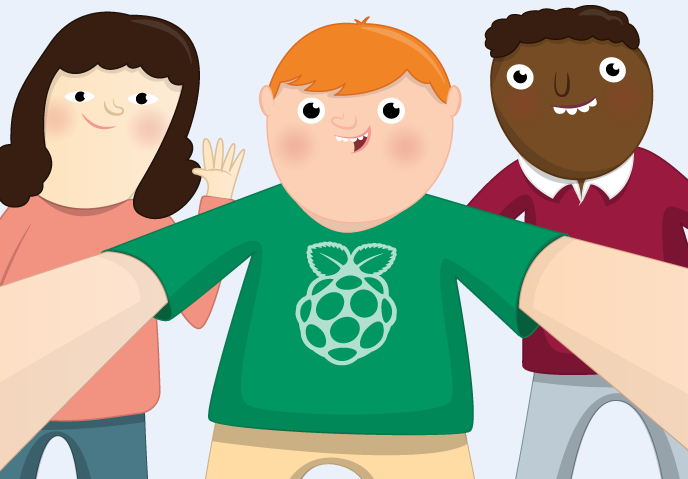 All the lights, all of the twinkly lights

Very interesting. A couple of years ago, I tried (as a learning exercise), to develop a Countdown (letters round) program in Wolfram, using Wolfram’s inbuilt dictionary. There was no sophisticate I/O – I just typed in the letters as they appeared on the TV screen and displayed the results on my monitor.

However, I didn’t get it to do anything useful in the 30 second time limit. (But I didn’t have an RPi 3b then!)

Perhaps I should try building Rosie from the inside out…

Oooo, do let us know if you do.