Michael Darby, who blogs at 314reactor, has created a new Raspberry Pi build, and it’s pretty darn cool. Though it’s not the first Raspberry Pi-modded Nerf gun we’ve seen, it’s definitely one of the most complex!

An ammo counter and range finder made from a Raspberry Pi for a Nerf Gun.

Nerf guns are toy dart guns that have been on the market since the early 1990s. They are popular with kids and adults who enjoy playing paintball, laser tag, and first-person shooter video games. Michael loves Nerf guns, and he wanted to give his toy a sci-fi overhaul, making it look and function more like a gun that an avatar might use in Half-Life, Quake, or Doom.

A busy and creative member of the Raspberry Pi community, Michael has previously delighted us with his Windows 98 wristwatch. Now, he has upgraded his Nerf gun with a rangefinder and an ammo counter by adding a Pi, a Pimoroni Rainbow HAT, and some sensors.

Setting up a rangefinder was straightforward. Michael fixed an ultrasonic distance sensor pointing in the direction of the gun’s barrel. Live information about how far away he is from his target is shown on the Rainbow HAT’s alphanumeric display. 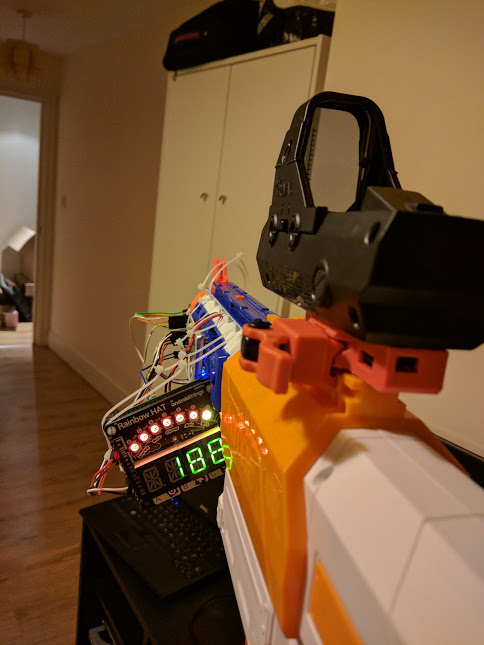 To create an ammo counter, Michael had to follow a more circuitous route. Since he couldn’t think of a way to read out how many darts are in the Nerf gun’s magazine, he ended up counting how many darts have been shot instead. This data is collected via a proximity sensor, a device that can measure shorter distances than an ultrasonic sensor. Michael aimed the sensor towards the end of the barrel, attaching it with Blu-Tack. 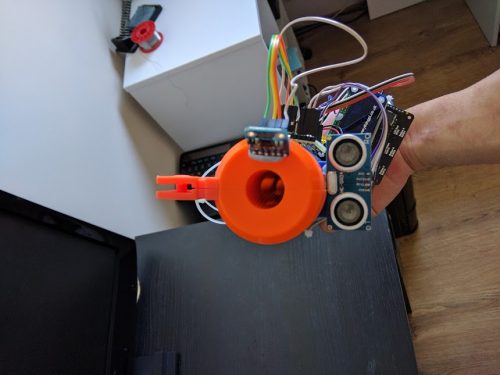 The number of shots left in the magazine is indicated by the seven LEDs above the Rainbow HAT’s alphanumeric display. The countdown works for more than seven darts, thanks to colour coding: the LEDs count down first in red, then in orange, and finally in green.

In a Python script running on the Pi, Michael has included a default number of shots per magazine. When he changes a magazine, he uses one of the HAT’s buttons as a ‘Reload’ button, resetting the counter. He has also set up the HAT so that the number of available shots can be entered manually instead.

On Michael’s blog you will find a thorough step-by-step guide to how he created this build. He has also included his code, and links to all the components, software installation guides, and test scripts he has used. So head on over there if you’re keen to mod your own nerf gun like this, and take a look at some of his other projects while you’re there!

Michael welcomes suggestions for how to improve upon his mods, especially for how to count shots in a magazine automatically. Do you have an idea? Let us—and him—know in the comments!

Over the years, we’ve covered quite a few fun toy upgrades, and some that may have to be approached with caution. The Pi-powered busy board for babies, the ‘weaponized’ teddy bear, and the inevitable smart Fisher Price phone are just a few from our archives.

What’s your favourite childhood toy, and how could it be improved by the addition of a Pi? Share your ideas with us in the comments below.