In March 2018 we announced the launch of Raspberry Pi 3 Model B+. One of the many features added to the new board was the ability to be powered through Power over Ethernet (PoE) with a HAT. We are really pleased to announce that the PoE HAT is on sale from today. 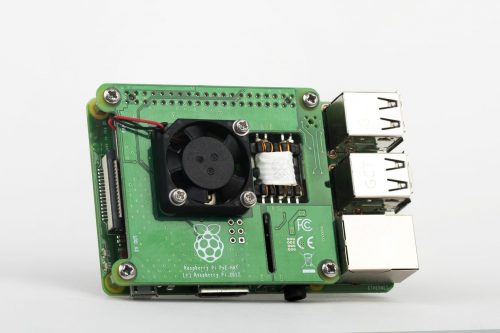 The HAT connects to the Raspberry Pi 3B+ 0.1” headers: the 40-way GPIO; and the new 4-pin header near the USB connectors, which allows you to power the system using your Ethernet cable.

Power over Ethernet is a widely adopted standard that places power on the Ethernet cable along with the data. It has no effect on the data, so you won’t lose bandwidth by using PoE. There are various standards of PoE; this HAT uses the most common standard 802.3af, which allows delivery of up to 15W. This means that the HAT is capable of providing all the power needed for running your Raspberry Pi. You will need power sourcing equipment to power your Pi. This is either provided by your network switch or with power injectors on an Ethernet cable. 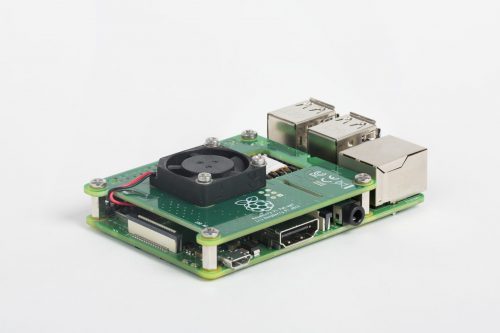 The HAT is a compact, single-sided board that sits within the footprint of the Raspberry Pi. It will fit comfortably inside an official Raspberry Pi case. A small (25mm) fan is pre-installed on the board. We see the product as a useful component for people building systems that may be in tougher environments, so the addition of the fan helps with cooling. The fan is controlled over I2C via a small ATMEL processor which allows for it to be temperature-controlled: when your Raspberry Pi processor hits certain temperatures, the fan will be turned on to cool it down. To enable this you will need to get the latest firmware (sudo rpi-update). 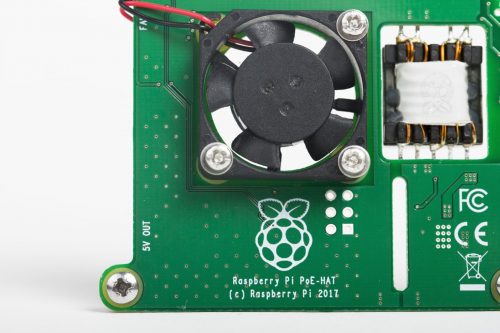 Because the fan is controlled over I2C, none of the GPIO are used, so you can stack a second HAT on top of the connector. To do this you will need to buy some longer pass-through headers that expose the pins on the other side of the PoE HAT. You will need one for the 40-way and one for the 4-way connector that has the PoE splitters on it. 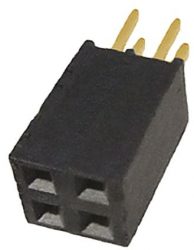 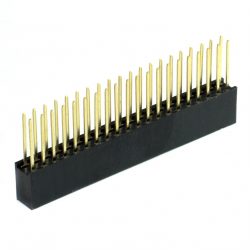 We’ve tested a variety of pass-through headers and can recommend the 2×20 pin header from Pimoroni and the 4-way risers from RS and element14.

Getting mains power to remote areas of buildings is often tricky. PoE support enables this with just an Ethernet cable, allowing you to provide power (and data) to your Pi wherever it is located. With the improved network booting you can now dispense with not only the power supply but also the SD Card, making deployment even cheaper for a Raspberry Pi based system in your factory or workplace.

Get ahead, get a HAT

We are very excited to see what new projects this enables for you. The Raspberry Pi Power over Ethernet HAT is available for sale now at $20, from Farnell, RS and The Approved Reseller Network.

Edit: I just saw this online and thought it was cool – Alex

Official @Raspberry_Pi PoE HAT powering the #ClusterHAT. With “temp_soft_limit=70” set, running #dnetc on all Pi Zeros and 4 cores of the #3Bplus looks to max out at 68.8C with no throttling :)