Back in July we wrote about an exciting project aiming to make computing accessible to school students in South Africa, where most schools have no computers at all and many lack electricity. Solar Powered Learning was raising funds for a Raspberry Pi computer lab at a secondary school in Johannesburg, with the aim of creating a facility that can be reproduced all over South Africa, and powered by solar energy where mains electricity isn’t available. 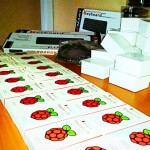 Raspberry Pis and accessories to equip the new lab 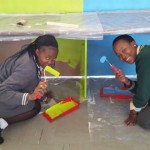 Students helped to prepare the room 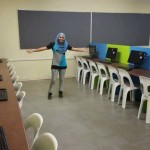 Remarkably, less than one month after the close of the fundraising campaign, the new computer lab was ready to use. Computers in the new lab on the day of its launch

Graham Schwikkard, a good friend of Pi who represents us in South Africa, went along to the launch of the new facility in September. He writes:

The team really did a stellar job meeting such a tight deadline. I was especially charmed by the school choir opening the ceremony, a student’s poem extolling the potential of technology and the many hand written thank you letters from students. It was very clear that the school, teachers and learners are very excited and appreciative of the project. The Lab itself utilises a Linux Terminal Server Project (LTSP) with the Raspberry Pis working as thin clients. The server is additionally loaded with Khan Academy Lite (adapted to the local curriculum). This lets the students have a capable desktop experience and access to teaching videos and interactive exercises. Worth mentioning are the key local partners Siyafunda CTC, PiFactory and Ismail Akhalwaya, who have done a similar setup previously at another local township school and were key in getting this project completed. ​This first pilot does not include solar panels and they were able to use a school which has an existing electrical connection.

Hopefully, in the coming months we’ll be able to see the success of the model, and we hope to see it expand across South Africa where many schools lack both computer labs and valuable computer skills. Several of the students have written letters of thanks to sponsors of the project – it’s clear the school community is really excited about the opportunities their new computer lab offers. It’s been great to watch the project develop this far, and we’re looking forward to more!