I had an email a little while ago, which opened: “I don’t know if you remember me, but…”

As it happens, I remembered Andy Baker very well, in large part because an indoor autonomous drone demo he ran at a Raspberry Pi birthday party a couple of years ago ACTUALLY CAUGHT FIRE. Here’s a refresher.

At the Raspberry Pi IV party and there is a great demo of an Autonomous drone which is very impressive with only using a Pi. However it caught on fire. But i believe it does actually work.

We’ve been very careful since then to make sure that speakers are always accompanied by a fire extinguisher.

I love stories like Andy’s. He started working with the Raspberry Pi shortly after our first release in 2012, and had absolutely no experience with drones or programming them; there’s nothing more interesting than watching someone go from a standing start to something really impressive. It’s been a couple of years since we were last in touch, but Andy mailed me last week to let me know he’s just completed his piDrone project, after years of development. I thought you’d like to hear about it too. Over to Andy!

Building an autonomous drone from scratch

I suffer from “terminal boredom syndrome”; I always need a challenging hobby to keep me sane. In 2012, the Raspberry Pi was launched just as my previous hobby had come to an end. After six months of playing (including a Raspberry Pi version of a BBC Micro Turtle robot I did at school 30+ years ago), I was looking for something really challenging. DIY drones were emerging, so I set out making one with a Raspberry Pi and Python, from absolute ignorance but loads of motivation.  Six years later, with only one fire (at the Raspberry Pi 4th Birthday Party, no less!), the job is done. 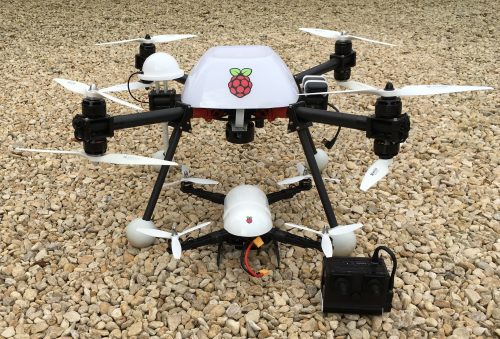 Zoë (as in “Ball”), the smallest drone, is based on a Pi ZeroW, supporting preset- and manual-flight controls. Hermione (as in “Granger”) is a Pi3 drone, supporting the above along with GPS and obstacle-avoidance.

Penelope (as in “Pitstop”), not shown above, is a B3+ with mix of the two above.

It probably took four years(!) to get the drone to simply hover stably for more than a few seconds. For example, the accelerometer (IMU) tells gravity and acceleration in 3D; and from sum math(s), angles, speed and distance. But IMU output is very noisy. It drifts with temperature, and because gravity is huge compared to the propeller changes, it doesn’t take long before the calculated speed and distance values drift significantly. It took a lot of time, experimentation and guesswork to get accelerometer, gyrometer, ground-facing LiDAR and a Raspberry Pi camera to work together to get a stable hover for minutes rather than seconds. And during that experimentation, there were plenty of crashes: replacement parts were needed many many times! However, with a sixty-second stable hover finally working, adding cool features like GPS tracking, object avoidance and human control were trivial in comparison.

In passing, I’m a co-founder and assistant at the Cotswold Raspberry Jam (cotswoldjam.org). I’m hoping to take Zoë to the next event on September 15th – tickets are free – and there’s so much more learn, interact and play with beyond the piDrone.

Finally, a few years ago, my goal became getting the piDrone exploring a maze: all but minor tweaks are now in places. Sadly, piDrone battery power for exploring a large maze currently doesn’t exist. Perhaps my next project will be designing a nuclear-fusion battery pack?  Deuterium oxide (heavy water) is surprisingly cheap, it seems…

If you want to learn more, there’s years of development on Andy’s blog at http://pidrone.io, and he’s made considerable documentation available at GitHub if you want to explore things further after this blog post. Thanks Andy!